"Tame" seemed to be the appropriate adjective to describe San Francisco Opera’s Carmen. 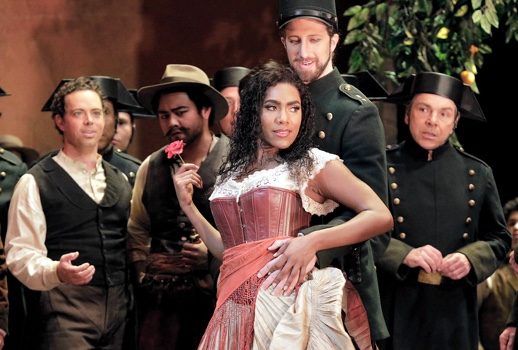 “Love is a wild bird that no one can tame” sang the title character of Georges Bizet’s perennial classic opera Carmen that opened San Francisco Opera’s Summer season Wednesday at the War Memorial. Unfortunately, “tame” also seemed to be the appropriate adjective to describe the performance that night.

Just three short years ago (also a summer opener), SF Opera brought in a staging of Carmen by director Calixto Bieito, the very first US production of any of his operatic work. It was a controversial performance marked by overtly gritty, raw sexuality; and it was pretty much derided here in SF. (I personally blamed the execution rather than Bieito’s concept).

In a way, this mounting of Carmen by Francesca Zambello almost felt like a reaction to that previous staging. The production itself wasn’t new; it was premiered at the Royal Opera House, Covent Garden in 2006.

In her notes inside the program, Zambello detailed the motivation behind her “new” Carmen:

I directed my first production of Bizet’s opera more than three decades ago, and it’s been fascinating to keep revisiting her character, especially as the larger cultural conversation around gender, sexuality, and power continues to evolve. The #MeToo movement, which shines a spotlight on the prevalence of sexual harassment and assault, has been a call to reconsider the implicit messages around sexuality and consent in the standard repertory, which is full of predators and victims.

To me, Carmen requires elements of danger and passion in equal measure; after all, it was a world filled with working-class people, Romani people, military officers, smugglers, and yes, bullfighters. Unfortunately, the show that night missed both elements, particularly before the break.

After a spirited prelude led by conductor James Gaffigan, the opera was off to a great start with the visuals of Don José waiting for his execution in a cell during the Prelude of Act 1. I thought that little backstory was a great idea, as it set the context for the proceedings.

What followed was the start of the problems. The Seville in this opera was brightly lit (lighting by Justin A. Partier) town, marked simply with three buildings at the end (guardhouse on the right and factory of the left) and with orange as the dominating color on stage, perfect for describing sunny atmosphere. 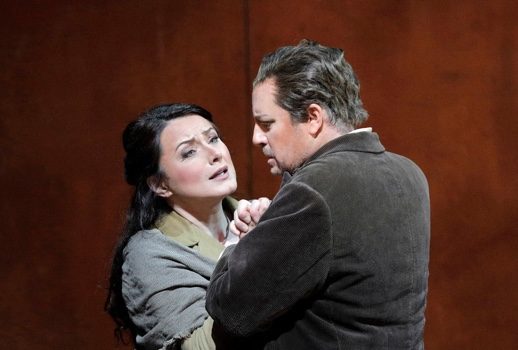 However, everybody on stage seemed to be directed to be awfully nice. I didn’t feel any sense of danger whatsoever. Take the scene between Micaëla and the soldiers, for example. It was as if they were chatting politely about the weather, despite of the suggestive lyrics. Similarly, when the cigarette girls appeared from the factory, they resembled more like school girls during recess rather than desperate women looking for release!

Musicologist Winton Dean long regarded Don José was actually the central figure for the opera; he said “It is his fate rather than Carmen’s that interests us”. For me, he needs to be charming and naïve in the beginning, as his descent into obsessed sexual being that leads into his destruction isthe core of the opera. Unfortunately, Zambello staged Don José as a passive and rather creepy introvert right from the start, so much so that Carmen’s seductions felt passionless and one-sided.

The rather static set (by Deni Sayers, who also served as Movement Director) was slightly rearranged for the subsequent acts; the biggest casualty was Act 3, where the set poorly suggested a smugglers’ hangout up in the mountain. Interestingly, the procession of the bullfighters in Act 4 ended with gigantic statue of the Virgin Mary, as if anticipating similar procession in Cavalleria Rusticana!

The production did have some great moments though. I particularly loved how Zambello staged Micaëla witnessing the tragic end from high above; it truly made a heartbreaking moment – a pure stroke of genius!

Among the singers, the star of the night was undoubtedly Romanian soprano Anita Hartig who made house debut as Micaëla. Hartig fully embodied the only “pure” character in the opera body and soul with her crystal-clear voice. She shone particularly bright during her Act three aria “Je dis, que rien ne m’épouvante”. In this “prayer for strength”, marked by beautiful pianissimi, she showed how determined she was to overcome her fears to be with the one she loved. The audience fully embraced it and rewarded her with long applause!

J’Nai Bridges and Matthew Polenzani made role debuts as Carmen and Don José with this performance. Without much help from the direction, Bridges tried hard to find her distinctive voice, but her sound got grainier and she blended more with the chorus as the night progressed. Polenzani fared better, but his unsympathetic José found little support from the audience. He did however sing the “Flower Song” wonderfully.

It pained me to report that Kyle Ketelsen, who was immensely impressive as Golaud at The Met’s Pelléas et Mélisande a couple of months ago, made a suave but underwhelming turn as Escamillo. He at times got drown by the orchestra and chorus, most notably during his big number “Votre toast”. He did make a such a grand entrance, singing on top of a horse.

Conductor Gaffigan, in his SF Opera performance debut (he did conduct Adler Fellows concert before), brought a lot of flair and excitement to the score. He highlighted the many Spanish elements of Bizet’s music, and he particularly excelled in the many orchestral preludes of the opera. Unfortunately, the Chorus sounded less coherent than normal that night.

All in all, this was a rather frustrating night at the Opera. Let’s hope that the pendulum will swing towards the middle the next time SF Opera is presenting Carmen!