The opera proved somewhat puzzling—the score representing more a collage of fragmented and incidental musical ideas, and the libretto a turgid, slow-moving mass of purple prose. 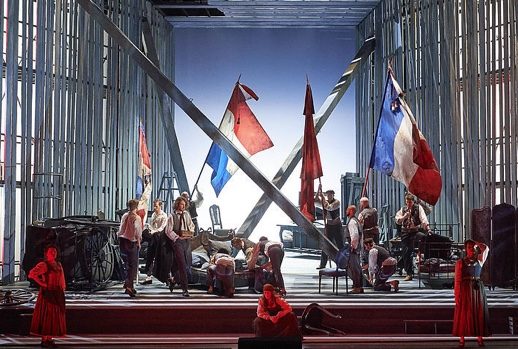 Gottfried von Einem’s Dantons Tod is the opera that catapulted the Austrian composer to international recognition when it was first premiered at Salzburg in 1947.

Its libretto, written in collaboration with his teacher Boris Blacher, is based on a play by Georg Büchner that follows the revolutionary Georges Danton’s failure to curtail Robespierre’s power during the Reign of Terror. Von Einem and Blacher’s inspiration to adapt this narrative to the operatic stage is also quite intriguing.

The creators had identified in the Danton-Robespierre conflict a parallel with Operation Valkyrie’s failed attempt to assassinate Hitler, essentially creating a politically resonant new opera about the ills of political inaction against tyranny during one of the first postwar Salzburg festivals.

Last spring, the Vienna State Opera mounted a new production of the work directed by Josef Ernst Köpplinger to honor Von Einem’s centenary and revived it this May with an excellent musical team spearheaded by the Danton of Tomasz Konieczny.

During its best moments, this rarely performed opera can be a theatrically gripping work that provides its central characters with stirring vocal scenes underpinned by an orchestral backdrop that recalls the language of Hindemith tone poems and Stravinskian jazz suites.

In its entirety, however, the opera proved somewhat puzzling—the score representing more a collage of fragmented and incidental musical ideas, and the libretto a turgid, slow-moving (the piece lasts only 1.5 hours) mass of purple prose.

The source material for Dantons Tod ought to provide excellent fodder for a marvelous opera. It traces the final days of one of the French revolution’s important architects during democracy’s violent birth pangs. More importantly, it uses one of Georg Büchner’s powerful dramas as the basis for the libretto.

However, unlike the other great opera (Wozzeck) that was inspired by a Büchner play, much of Von Einem’s Dantons Tod fails to convey strong character development or cohesive musical structure until the latter scene where Danton is tried before the Revolutionary Tribunal.

My primary beef with von Einem’s adaptation is that the first two thirds of the plot feels aimlessly expository. Much of Georges Danton’s early dialogue is occupied with heavy handed, highfalutin political observations about Robespierre’s exercise of power.

While the composer furnished his eponymous character with beautiful and textually nuanced vocal writing, his early dialogue neither creates a multidimensional picture of its titular character nor impels the action forward.

Moreover, it becomes apparent that the libretto is plagued with dramatic inconsistencies when the characters who create the most striking impression in the opera’s first half are Camille Desmoulins (Danton’s comrade and an idealist character with ardent lines for lyric tenor), Robespierre (a character tenor type who really has only one aria to sing in the entire opera) and Lucile (Camille’s wife, a sympathetic character given some of the most exquisite mad scenes for lyric soprano).

Contrast that with Berg’s Wozzeck, where the title character’s monochromatic first lines, “Jawohl, Herr Hauptmann,” immediately reveal a vast microcosm of detail about this isolated and tragic everyman. One can make an argument that Dantons Tod was a first opera, and that the composer was still in the process of finding his voice. But Wozzeck was also a first opera, and it is a wholly original score that also happens to be infinitely more satisfying dramatically and musically.

Dantons Tod by no means represents a failure as a work of the stage. Von Einem for instance builds his edgy, slightly jazzy orchestration towards Georges Danton’s trial admirably. The titular character is given some of the most stirring and charismatic solos for bass-baritone, and the choral exchanges between the Jacobins and the Dantonists at times makes for stirring theater.

The quasi-Shakespearean ditties by the executioners near the opera’s end also provides a discomfiting contrast to the executions that immediately preceded them, and Lucile’s lyrical utterances that ultimately lead to her demise are executed with the eerie power of a Büchner finale (think of the bleakness that welcomes Wozzeck and Marie’s child upon the opera’s close… it’s not quite there but with a little tinkering and revision, the opera could possibly approach its impact).

Ultimately, despite the score’s eclectic tapestry, there was something gratifying about hearing this rarity performed by a stellar team of musicians and singers. Tomasz Konieczny fills Danton’s lines admirably with his powerful and kaleidoscopic bass baritone. As the revolutionary, Konieczny cut an impressive figure onstage, ever so effective as the brooding and later charismatic proponent of his political philosophy.

His attention to sculpting the text with the utmost musicality and attention to nuances in phrasing made his rendition a most rewarding listen, even if the role itself pales beside his other great Büchnerian stage assumption.

Benjamin Bruns was ardently lyrical as Camille Desmoulins, his piercing tenor and stage presentation embodying the tragic political idealist to a tee. Olga Bezsmertna as Lucile Desmoulins made much out of character’s vocal lines, her luscious and focused lyric soprano imbuing her mad scenes with such repose that one hoped that her role was better fleshed out.

I found Thomas Ebenstein’s disembodied singing of Robespierre’s aria incredibly disconcerting, and for the right reasons. One would expect a singer for this part to more closely resemble an Aegisth or a harsh, strident character tenor, but Ebenstein’s unusual vocal production also lent its own sense of atmosphere to this brief, yet critical minor part.

He and his ensemble drew a warm and dramatically paced reading that was also precise in its ability to unveil von Einem’s many sources of inspiration (e.g. the clearly underlined Stravinskian ostinato, the filmic and episode like interludes that remind one of Hindemith and Prokofiev) throughout the work. The chorus also performed admirably, even if a few scenes were stultified by sometimes predictable, and at other times awkward theatrical interjections.

Köpplinger’s production, with sets by Rainer Sinell and costumes by Alfred Mayerhofer, places the drama in a repurposable wood shed wherein the opera’s many political discussions and trials take place. It is essentially a literalist production, replete with traditional period costumes and transporting the audience to the time of the source material.

To me, the production essentially resembled something of a halfway point between Les Misérables and Hamilton, the chorus and character blocking very much resembling something out of a Broadway musical. I haven’t decided whether that is a good thing, but I somehow feel that a more abstract production could have enhanced one’s experience of this music.

Ultimately, I found it admirable that the Vienna State Opera lavished von Einem’s debut opera with an excellent musical team and a new production that pays homage to its source material.

There are obviously many musical and dramatic reasons why Dantons Tod is not circulated in the canon more outside of the German speaking world. However, for all its imperfections, it remains a treat to have listened to an excellent cast perform this transitional work of theater.

There are so many works that have been relegated to collect dust in many a music library, and if most of these scores have not aged well, I believe that there is a virtue in celebrating such works, if only as a means of discovering the evolution of an art form. If Dantons Tod lacked some of the elements of opera’s greatest exponents, it nonetheless gave me another opportunity so sample the musical and theatrical gifts of Tomasz Konieczny.