Daniel Thomas Davis’ The Impossible She, was a towering musical achievement, a hugely complex work packing a whopping political and intellectual punch. 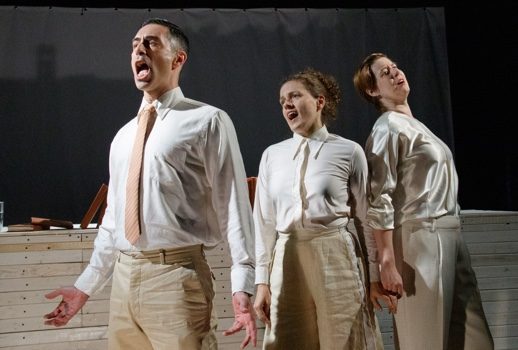 Since its founding in 2007, Rhymes with Opera has emerged as a leading voice in the performing and commissioning of contemporary opera. In their recent double bill at the 124 Bank St Theater the company premiered two powerful, urgent new works which made a compelling case for the enduring relevance of opera in the 21st century.

The first work on the program, Colin Read’s On Loneliness and Solitude, was a compact, hard-hitting meditation on the psychology of isolation. A staged song-cycle, Read’s work comprised three vivid settings of poems by Stickney, Mansfield, and Williams, running together attacca to form a single, continuous musico-dramatic statement.

The poems themselves share a modernist introversion, marked by a Freud-era fascination with the inner workings of the psyche; yet Read softened their modernist edge with a warm, tender setting, bringing the text to life in nuanced, finely drawn strokes. Read’s neo-romantic musical style, reminiscent of early Berg in the work’s opening strains, was punctuated with moments of twenty-first-century funk, especially in the Williams setting, with its energetic, off-beat rhythms and clapped hockets.

Read’s setting of Mansfield’s “Loneliness”, by far the most powerful part of the cycle, unfolded in soaring, heart-aching phrases, exquisitely sung by Bonnie Lander with Elisabeth Halliday and Robert Maril echoing.  The cycle’s moments of Greek chorus were charmingly written, showcasing Read’s propensity for tight, lush vocal harmony, and executed with balance and precision by the ensemble.

The second work on the program, Daniel Thomas Davis’ The Impossible She, was a towering musical achievement, a hugely complex work packing a whopping political and intellectual punch. The opera told the true story of Eleanor Roosevelt’s secret romantic relationship with journalist Lorena Hickok, painting an intimate portrait of their lives in a series of five fleeting vignettes.

At the heart of Davis’ work was an ambitious historiographical project: drawing primarily from Blanche Wiesen Cook’s three-volume biography of the First Lady, Davis’ work challenged the sanitized, two-dimensional image of Roosevelt that has endured in popular culture, presenting, instead, a nuanced sketch of a woman fighting to retain agency and autonomy within a misogynist world.

Davis’ opera dramatized the tensions between Roosevelt’s love for Hickok, and the (gendered) public pressures of life as first lady at one of the most fraught moments in American history. The opera presented an impressive intersectional reconsideration of the Great Depression, exploring the ways in which gendered and queer identities helped to shape the political tenets of the New Deal.

Throughout the opera, Davis staged his own historical distance from his subject matter; the dramatic material was rarely presented naturalistically, usually subjected to some kind of abstraction or mediation.

Performers sang along to prerecorded music blaring from a vintage radio; projections of thirties-era newspapers and postcards dissolved into hazy Mondrian-esque squares; and an onstage saxophonist (Zach Herchen– utterly captivating), an embodiment of the audience’s historical remove, interacted with the onstage characters both musically and physically, a near-constant aural and visual presence.

The Impossible She wore its intertexuality on its sleeve: woven into the opera’s libretto were a series of 17th- and 18th-century poems (also gifted to the audience in a stylishly bound booklet), recordings of Eleanor Roosevelt’s speeches, excerpts from the couple’s letters, and a number of Depression-era ballads (such as Bernard “Slim” Smith’s Breadline Blues), beautifully re-orchestrated by Davis.

These disparate elements were strung together by the mercurial figure of the “Outside World” (sung with considerable panache by the steely-voiced Robert Maril), a mysterious, transient character,taking on a variety of personas throughout opera, from nagging journalist to unemployed jobseeker.

Davis used “Outside World” as a stand in for the vox populi, a manifestation of the societal forces threatening Roosevelt and Hickok’s relationship; appearing mainly in transitions between scenes, “Outside World” interacted with the radio and the saxophonist in a series of dream-like interludes.

Cipher characters have become an entrenched feature of contemporary opera in recent years, from the “ghost Marnies” of Muhly’s Marnie to the “Sodbuster” of Mazzoli’s Proving Up; however, Davis endowed his “Outside World” with a hefty dose of in-your-face Verfremdungseffekt, using the character to disrupt, perturb, interject, dismantle, and fragment.

For all that The Impossible She could be a distant, thought-provoking, and even alienating work, it also had moments of raw, heart-breaking emotion. These more touching moments often surfaced unexpectedly, somehow all the more powerful when breaking through Davis’ eclectic multimedia furor.

The opera’s third scene, the tear-jerking highpoint of Davis’ work, offered a radiant portrait of queer romance, the music bursting into lustrous, sweeping lyricism as Roosevelt and Hickok confessed their love for each other. In the opera’s fourth scene, the music bristled with a bracing eroticism, painting a searing and intimate portrait of the protagonists’ clandestine affair.

Davis’s score, with its post-minimalist modularity, effortlessly bridged the gap between operatic declamation and popular song. The score was comprised primarily of short, striking riffs and grooves, repeated over the course of each scene in long hypnotic cycles. Davis’s music had a lucent tonality, reminiscent of Philip Glass or Steve Reich, but with hints of jazz and soul. If the repetitiousness of the word-setting was occasionally grating, Davis made up for it with sublime and intricate ensemble writing, particularly in the duets between Roosevelt and Hickok.

While the performances were, for the most part, outstanding, they were often scaled much bigger than was required for such a small space. A little more dramatic and vocal restraint would have communicated the subtleties and complexities of the work more effectively.

The real coup of the evening, however, was Laine Rettmer’s direction, which resourcefully evoked the Depression-era setting without recourse to literalism or cliché. At once expansive and claustrophobic, quiescent and ephemeral, Rettmer’s staging enlivened and transformed the tiny stage of the 124 Bank St Theater, situating Roosevelt and Hickok’s relationship within a shifting, precarious world.

The sensuality of Rettmer’s staging lent candor and sincerity to Davis’ work, the director never shying away from the physicality of Roosevelt and Hickok’s relationship. Rettmer found symbolism, fluidity, and play within the opera’s musico-dramatic patchwork: a car-ride to New York melted into a series of sprawling, rhapsodic recollections, while scattered books evoked a flurry of journalists and paparazzi.

The Impossible She gave CNN opera an indie makeover, positioning contemporary opera as an important tool for political and historical commentary, for magnifying marginalized voices, for sharing long-lost stories, and for finding solutions to a tumultuous present in a distant past.