For more than 40 years, the magnificent opening image from Francis Poulenc’s Dialogues des Carmélites has served as an icon for the Met. 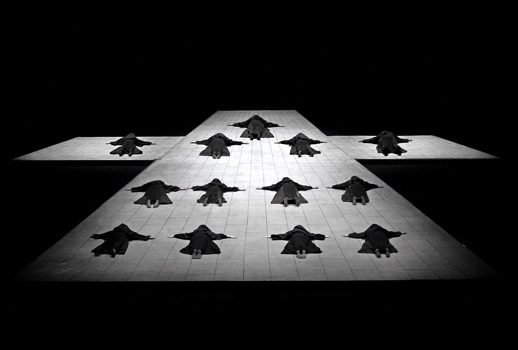 For more than 40 years, the magnificent opening image from Francis Poulenc’s Dialogues des Carmélites seen above has served as an icon for the Met—and not only to advertise this opera.

The production (by director John Dexter, scenic designer David Reppa, and lighting designer Gil Wechsler) more generally represents the company at its absolute best. Let that be a lesson. The strength of Dexter’s Dialogueslies in its elegant simplicity.

It’s a rare example of understatement from a company that often seems to make the opposite choice: worried about filling the vast stage, productions tend to be over-decorated, over-literal, and far too busy. (A good friend refers to the second act of Franco Zeffirelli’s Bohème, in the repertory since 1981, as “Where’s Waldo?”)

Let the news also be spread far and wide. In 1987, a decade after the production premiered, Dialogues got a telecast, with a sensational group of singers that retained three memorable performances from the first cast: Maria Ewing as Blanche de la Force, Régine Crespin as Madame de Croissy, and Betsy Norden as Soeur Constance. It also had Jessye Norman in magnificent form as Madame Lidoine.

But the technology of the time was limited, and it was imperative that this landmark show be preserved under optimal conditions. It also makes sense that the ultimate documentary of the production be in French (the original staging followed Poulenc’s directive that the opera should be heard in the vernacular).

Happily, that happened this week, when Saturday’s Dialogues performance was transmitted in HD. Musical values were generally top-tier, with Yannick Nézet-Séguin conducting stylishly and sensitively, and strong vocal performances by virtually the entire cast.

I was especially impressed with Karen Cargill’s thrillingly sung and strongly acted Mère Marie. Blanche is an especially good role for Isabel Leonard’s high-lying lyric mezzo, which sounded beautifully rounded throughout its range. Her French is also good, though she was less effective in pointing the words than some previous exponents of the role.

Erin Morley was a sweet-voiced and often touching Constance. Newcomer Emily D’Angelo made a big impression in the small role of SoeurMathilde. Only Adrianne Pieczonka sounded uncharacteristically edgy as Lidoine, though she brought her usual sense of presence.

In visual terms, seen at a relay of the HD broadcast, the show looked as great as ever—truly, 42 years have only burnished its beauty.

And yet. What struck me this time was the disconnect between the dramatic power of the design and the now rather studied, overly symmetrical direction of the action.

Too often, groups are arranged with drill-team precision (they’re 18th century nuns, not the Kilgore Rangerettes). For all that this is an opera about—well, dialogue—actual conversation feels rare; more often, two singers are placed side by side, but with both staring directly forward. There’s not much sense of actual tasks—some proforma ironing was unconvincing.

Nor was the acting, particularly in two central roles, quite up to the level I’d hoped for.

Leonard’s perfectly groomed eyebrows and flawless peachy makeup were, of course, far more noticeable in HD than they would have been in the house. In fact, her physical loveliness is actually not an asset in this role—but what I was more conscious of was the generally beatific posturing (occasionally assured, sometimes vexed, but always radiant) that characterized her performance.

That, and Leonard’s magical ability to find her key light in every close-up, suggested a nun less than Loretta Young playing one.

On the other hand, Karita Mattila eschewed physical glamor. Always a boldly committed actor, one admired her willingness to go at it with such vigor here. But as the Old Prioress, she made a basic acting mistake: to play the character’s pain, rather than her efforts to overcome it. The resulting grunts and groans would be better suited to Dolores Claiborne.

Ultimately, this performance of Dialogues was a fascinating lesson in the problematic art of revivals. It could hardly have looked more beautiful; but restaged here by David Kneuss, it lacked a deeper sense of genuine theatrical invention and connection. Even the final execution scene, usually an overwhelming emotional experience, inspired admiration here rather than tears.

I want this Dialogues production to remain in the Met repertory for years to come—it’s a beacon of what opera can be. I also hope the next time we see it, there will be a new hand involved in rethinking the staging of the show, and allowing the singers—by which I mean actors, really—to bring more to their roles.