The end is the beginning of the end

At the Metropolitan Opera’s Götterdämmerung on Saturday afternoon, the fires which consumed the Gods burned lukewarm. 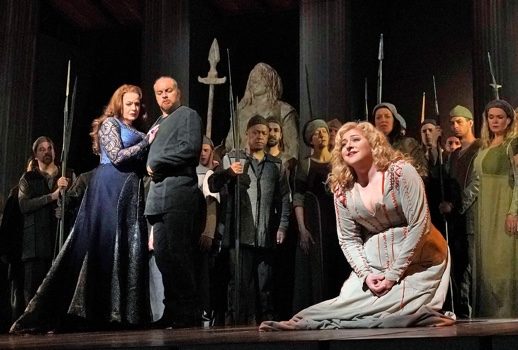 Representing the end of the world is a challenge for any opera company, especially when said apocalypse comes as the culmination of eighteen hours of Norse epic. Yet, at the Metropolitan Opera’s Götterdämmerung on Saturday afternoon, the fires which consumed the Gods burned lukewarm, bringing the cycle to an anticlimactic conclusion.

This tepidness arose, in part, from uneven performances in the opera’s two lead roles. Andreas Schager’s Siegfried began with such promise, Schager kicking off his Met debut with a mix of heldentenor muscularity and Italianate luster during the opera’s prologue.

However, Schager’s Siegfried devolved somewhat over the course of the opera. By the third act, Schager had developed a tendency to swoop up to notes, and any color or nuance there was in his act-one sound had long disappeared. He made up for this somewhat with some thrilling death-bed singing, his swansong ringing with defiant brilliance.

In comparison to Stefan Vinke’s Siegfried in the preceding opera, Schager’s Siegfried was meatier, more brash, but with less sweetness, and less soar.

Ultimately it was Schager’s characterization of Wagner’s hero which let him down, the tenor presenting a Siegfried so puerile and so bumptious it was difficult to understand how Brünnhilde or Gutrune could fall for him at all. Schager’s Siegfried pranced around the stage, flapping his sword about like a toddler, playfighting with the Gibichung vassals, swishing his golden locks, and checking his reflection in his sword like a Viking Dorian Gray.

Although Wagner paints his protagonist as fatally arrogant, Siegfried is still meant to a hero, and, in Götterdämmerung, is supposed to have matured somewhat from the naïve youth we met in Siegfried. Schager’s Siegfried, however, appeared to have regressed, Benjamin-Button style, between the two operas, to the extent that he seemed more like a bratty school-yard bully than a noble warrior.

Schager’s Siegfried was so unsympathetic that it was difficult to conjure any empathy for him in the opera’s second and third acts, and the mournful sobriety of the Trauermarsch felt like so much overkill for such an unsavory character.

By contrast, Christine Goerke’s characterization of Brünnhilde was utterly gripping, but let down by some patchy singing. She lacked evenness between registers: her lower notes were often pinched, her middle register frequently too quiet, and her higher register, which, in the prologue, had a reliable bloom, gained an unwieldly vibrato over the course of the opera.

However, there were many spine-tingling moments in the soprano’s performance, the soprano showing her remarkable ability to channel raw feeling into her sound. Goerke was at her best in the second act, leveraging her varied palate of vocal colors to paint a compelling musical portrait of Brünnhilde’s torment; her cries of revenge had an Elektra-like snarl.

Although Goerke was off to a rocky start in the prologue, overshadowed by Schager’s vocal zeal, her performance lifted in her encounter with Waltraute, and some taut dramatic singing accompanied her impassioned decision to keep the ring. Goerke’s immolation scene, however, was a tepid affair: the soprano sounded fatigued, and never matched the swelling lyricism of the orchestra.

Yet Goerke was a captivating stage presence throughout, and imbued her Brünnhilde with hefty emotional clout. Next to Schager’s rather broad-strokes portrayal of Siegfried, Goerke’s Brünnhilde charted a complex, nuanced, and, ultimately, deeply touching emotional journey.

I have always found the humiliation of Brünnhilde in Götterämmerung uncomfortably cruel, and it was all the more disquieting to watch when underpinned by Goerke’s gut-wrenching portrayal of the heroine.

Goerke’s performance only served to highlight the production’s apparent ambivalence toward the brutal and misogynist treatment of Brünnhilde over the course of the cycle, and it seemed more and more unconscionable that Robert Lepage’s production, famously devoid of any political relevance, couldn’t even take a stance on one of the cycle’s most sickening moments.

The stirring gravitas of Goerke’s Brünnhilde demonstrated the extent to which Lepage’s production, in its preoccupation with a machine, has lost its humanity.

The remaining roles were, on the whole, exceptionally well cast, and some of the most compelling performances emerged from the opera’s smaller roles.

Edith Haller, making her Met debut, was a fresh-voiced Gutrune, with a bright, shimmering upper register. Haller was mesmerizing to watch, even when not singing, bringing an elegant dignity to one of Wagner’s most underwritten roles; her performance came to the fore in the third act, where her mourning of Siegfried seemed achingly genuine.

Michaela Schuster sang Waltraute with a luminous clarity; her lengthy narration, which, with Wagner’s tendency to pile on the exposition, could so easily have become tedious, was moving, ominous, and urgent.

Evgeny Nikitin’s Gunther started out rather stiffly; however, over the course of the second act, his more brittle sound gave way to steely brawn. Nikitin’s acting was often rather opaque, and, as the opera went on, his Gunther often seemed confused or aimless.

Eric Owens’ Hagen was understated but not undercooked, Owens finding a menacing nuance in his character’s puppet-mastery. In the ensemble scenes, Owens sang with a quiet precision and a terse sting; however, he gained a honeyed richness in his act-one monologue, which had a chilling beauty in spite of the character’s dastardly plotting.

Ronnita Miller, Elizabeth Bishop, and Wendy Bryn Harmer, as the three Norns, began the opera with delightfully lyrical performances all round; Miller, in particular, was a standout, endowing her baleful visions with a pressing solemnity.

The three Rhinemaidens, Amanda Woodbury, Samantha Hankey, and Tamara Mumford, were a much tighter ensemble in this opera than they were in Rheingold, perhaps because they were not being hoisted aloft by the 45-ton machine.

In addition to the exceptional ensemble work from the Norns and the Rhinemaidens, Götterämmerung also (finally) featured the Met chorus, who were like a breath of fresh air in Wagner’s interminably soloistic opera.

Wagner was a talented choral writer, despite his frequent assertions that he would one day completely abolish the operatic chorus. It is all the better that Wagner didn’t make true on his promise when writing Götterämmerung, as the men of the Met chorus almost stole the show with their fleeting appearance.

From terse interjections to rousing, marcato arpeggios, the Met’s choristers sang with vigor and conviction despite being treated as mere set dressing in Lepage’s stale staging.

The Met orchestra was in fine form under the baton of Phillipe Jordan,playing with a warmth and a momentum not heard in the previous operas. Particularly impressive was the orchestral interlude which links the two scenes of the prologue, which, despite its brooding chromaticism, was positively glowing.

Some rough tuning in the brass did not dint the propulsive drive of the second act, and under Jordan’s brisk hand, the highlight reel of leitmotivs in the opera’s lengthy orchestral playout bristled with spritely gusto.

Götterämmerung contained both the best and the worst of Lepage’s staging. The first scene of the prologue demonstrated the machine’s ability to conjure up evocative images. The Norns’ rope, woven from a series of threads dangling from the machine’s elevated planks, created the ghostly silhouette of a tree, and the rope’s subsequent breaking was represented by the violent plunging and swinging of the string-laden planks.

This scene was so effective because it was not reliant on Lepage’s (distracting, disappointing) two-dimensional projections, but treated the machine as a dynamic, multidimensional, semi-abstract interface, with a palpable relationship to the singers onstage via the entangled rope.

However, Götterämmerung also laid bare the machine’s weaknesses. Projected tree rings, ostensibly meant to represent the wooden walls of the Gibichung hall, only demonstrated the machine’s complete inability to represent any kind of cavernous interior.

Worse still was Lepage’s staging of the opera’s final moments. Wagner famously labored over the cycle’s ending for a number of years, writing discarded draft after discarded draft before finally settling on the earth-shattering version we know today.

Yet the Met seemingly went out of its way to thwart the Master’s life’s work, as the cycle’s finale, which reconciles the ancient mythology of the Nibelungenlied with Schopenhauerian metaphysics, was reduced to the dull creaking of a few illuminated planks in Lepage’s production.

After Brünnhilde, riding atop Grane (here represented by a Taymor-esque puppet which, for some reason, was absent from the preceding operas), was awkwardly rolled onto Siegfried’s funeral pyre, the machine descended, replacing the (at least partially) realistic tableau with cartoonish flames.

As if this scene could not get any more patronizingly demonstrative, statues of the gods, shrouded in plumes of smoke, emerged above the flames, only to crudely topple over like bowling pins.

When Hagen shouted “Zurück vom Ring!” amidst the opera’s dying strains, I couldn’t help but wish that someone had shouted those same words at Robert Lepage before he decided to give Wagner’s cycle the Cirque-de-Soleil treatment.