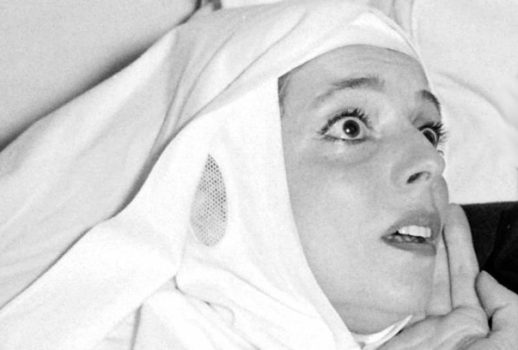 The legendary John Dexter production of Les Dialogues des Carmélites returns to the Met next week, so “Trove Thursday” features a rare live broadcast of that Poulenc masterpiece featuring the composer’s favored soprano Denise Duval as Blanche along with a recent pair of his sacred works: the Gloria with Sandrine Piau and his Stabat Mater featuring Julie Fuchs and Julian Behr.

Duval died just three years ago at the age of 94, and because Dialogues had its world premiere at La Scala with Virginia Zeani as Blanche, the French soprano didn’t create the role but she does appear on the celebrated EMI recording with the original French cast. She was, however, the first to perform both Les Mamelles de Tirésias and La Voix Humaine.

Although her US operatic appearances on stage were few—she was a memorable Thaïs in Dallas in an opulent Franco Zeffirelli production, she did perform all three of her Poulenc heroines in concert versions in New York with the American Opera Society. Surprisingly she also performed Dialogues at Dominican University (!) near Chicago in 1962.

This recording of the Argentine premiere is, as far as I know, the only live document of Duval as Blanche in what turned out to be her last-ever opera performances; she retired from the stage later that year at 44. It also features a number of important French singers of the era: Suzanne Sarroca, Andrea Guiot (who also performed Lidoine alongside Duval at Carnegie Hall) and Hélène Bouvier as well as Gabriel Bacquier in the relatively minor role of the Marquis.

As sacred music plays a role in Dialogues particularly in the devastating final “Salve Regina,” it seemed natural to also include a pair of Poulenc’s popular liturgical works.

Behr who was a wonderful Arbace in Idomeneo there several summers ago returns to the Mostly Mozart Festival in July as Tamino in the New York premiere of the much-traveled Barrie Kosky production of Die Zauberflöte.

This season’s revival of the stark Dexter production, first seen at the Met 42 years ago, features a striking cast—Isabel Leonard, Adrianne Pieczonka, Karita Mattila, Erin Morley and Karen Cargill—conducted by Yannick Nézet-Séguin. It runs for just three performances but will be featured as an HD transmission on May 11. Met audiences won’t be seeing the last of this Dialogues either—I understand a future revival is already scheduled.

These three Poulenc workscan be downloaded by clicking on the icon of a square with an arrow pointing downward on the audio player above and the resulting mp3 files will appear in your download directory.

The archive which lists all “Trove Thursday” offerings in alphabetical order by composer has recently been updated to include all works posted up to last week.