The harsh untruth of the camera eye 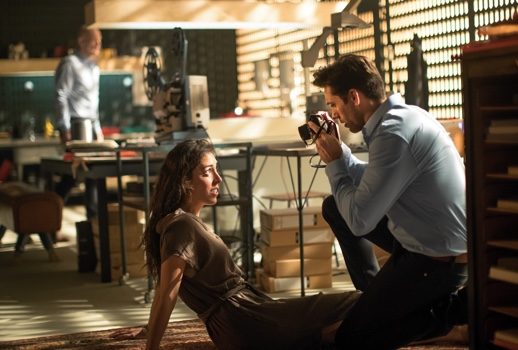 Ivo van Hove really seems to be everywhere lately. An All About Eve in London, a Network on Broadway, an upcoming West Side Story— even a round-table discussion in the New York Times, apparently convened just to litigate whether or not the contentious Belgian director is, in fact, all style and no substance.

To be sure, one might think that a song cycle like Leos Janácek’s The Diary of One Who Disappeared, being itself without much substance, would be a good fit. However, his production of Diary at BAM reveals that material such as this—a song cycle, with theatrical components like plot, character, and action sketched quite lightly—demands a rigor and a specificity in its staging that Van Hove simply has not delivered.

Not only is The Diary of One Who Disappeared light on the traditional elements of a fully-staged theatrical work, what it does present—the story of a nice village boy who meets a tempting Roma girl, impregnates her, and chooses to leave his family and village to be with her—is full of the racist tropes common in Western writers’ portrayal of Roma people and especially women.

Zefka, the Roma girl, is a hypersexualized cipher, with no real characterization beyond the two lures of a societally forbidden sexual encounter and a people stereotyped as permanent outcasts.

These cliches, particularly that of Roma women as seductresses, whose sexualities are irresistable and irresistibly degrading for the white men who fall for them, have done material harm to real Roma women. Van Hove, in turning the song cycle into a fully staged work, has been given the opportunity to really engage with the racist tropes that are its underpinnings.

Sadly, he mostly does not, a choice that feels not only disappointing but irresponsible when there is so little else to engage with in Janá?ek’s original material.

Some attempt is made to give voice to Zefka in the form of music added by composer Annelies Van Parys and—in the staging’s sole acknowledgement that actual Roma people exist—adapted from and inspired by Romany folk songs.

This inserted music is quite beautiful, eerie and a little droning, and showcasing a haunting, offstage trio comprising Raphaele Green, Annelies Van Gramberen and Naomi Beeldens as much as it does Marie Hamard’s Zefka.

This new material is not, however, enough to mitigate the fact that Van Hove has nothing to say about Zefka herself, relegating her to some truly retrograde stage postures as she slinks around in a red dress, jutting her hips out at the tenor lead (Andrew Dickinson) like she just walked off the stage of Carmen.

Instead, Van Hove has opted to go wide instead of deep, bypassing the work’s racial politics altogether and bringing in excerpts from Janácek’s diaries and letters to create a frame narrative about Janácek himself.

This archival material concerns Kamila Stösslova, a woman nearly 40 years Janácek’s junior, to whom he wrote hundreds of passionate, largely un-answered love letters and who appears, despite or perhaps due to her total lack of reciprocation, to have been the central creative muse of his late career.

This archival augmentation, plus Van Parys’s added music, accounts for nearly half an hour of additional runtime, taking the usually 40 minute song cycle up to a little over an hour. It also adds a character: an older man, played by Wim Van Der Grijn, implied to be Janácek himself, who reads the diary and letter excerpts, and acts as an older, identically dressed double for the song cycle’s tenor protagonist.

The thinking behind this is clear — Janá?ek in his letters to Stösslova explicitly names her as the inspiration for Zefka, and Diary’s plot is clearly his own fantasy of forbidden desire. However, far from making Diary a more viable piece of staged theater, the inclusion of Janá?ek himself raises more questions than it answers.

The tenor in this production is portrayed as a photographer, the set his darkroom studio, where he works obsessively on prints of Zefka.

Accordingly, Van Hove and his partner and long-time collaborator, set and lighting designer Jan Versweyveld, fill the tiny capsule set with light boxes and projectors that reproduce Zefka’s image all over the stage — in flickering reel to reel video, on contact sheets, in a print that, in a classically gimmicky, classically Van Hove-ian move, seems to be developed live on stage.

Some of this stagecraft is quite compelling, but it only creates more problems where the Janá?ek stand-in is concerned; he seems to be Janácek, because he reads from Janácek’s diaries, but he also doubles the tenor, who is not a composer but a photographer.

The result is a murky sort of equivalence drawn between musical representation and photographic representation, in which taking and developing photographs of your lover and writing a song cycle in which you imagine your unrequited object of obsession as a Roma girl pregnant with your baby are presented as identical acts.

That these are not, in fact, perfectly comparable forms of artistic representation is made unavoidable by the production’s failure to engage with Janácek’s racism. Actual images of Hamard (who is not, to my knowledge, Roma) are crisply projected all over the stage, while the song cycle itself hinges on the non-literal representation of Zefka-as-Stösslova.

The gap between the always-present photographs of a white woman and the libretto’s preoccupation with Zefka’s darkness is distracting, and badly undermines any of the already muddled claims being made about art’s relationship to reality.

Musically, the show is more or less stolen by its under-utilized female voices — Andrew Dickinson, the tenor, sounds strained, producing some ugly sounds as he pushes towards high notes and climaxes, but Hamard’s chest voice has a lovely richness, and the offstage trio provides some hair-raisingly beautiful harmonies.

This “hair-raising” quality is clearly what Van Hove is chasing, with the lighting that shifts from uncomfortably dark to uncomfortably bright, the tense and volatile blocking, the haunted and haunting reproduction of images.

Van Hove’s usual brand of nervous system theater only works if it can bypass your brain altogether. Diary of One Who Disappeared, with its clunky add-ons, its padded runtime, and, especially, its sloppy racial politics, is too unwieldy to reach whatever velocity is necessary to escape the orbit of logical thinking.

[Note: the term g*psy, although used heavily by Janacek and by the BAM production of Diary of One Who Disappeared is now widely considered to be a racial slur by the Romani people it once described. For this reason I do not use it in this review.]