Michael Mayer's production of La traviata at the Met is so timid, so devoid of insight, so cynically pandering and gaudy that I hardly feel like it even matters what I think of the performances of the current cast. 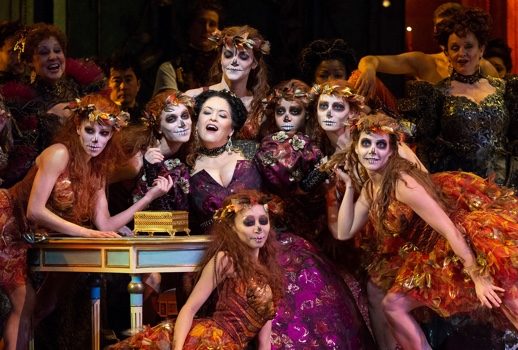 Michael Mayer‘s production of La traviata at the Met is so timid, so devoid of insight, so cynically pandering and gaudy that I feel like it hardly even matters what I think of the performances of the current cast.

If I sound a little ragey, maybe a bit of backstory will help you understand what’s rankling me.

I came to know La traviata in an odd and roundabout way that has ever since I suppose informed my opinions and ideas about the opera and especially how it should be performed. My mother, who taught high school drama and speech, subscribed to this magazine called Theatre Crafts which was, as the title indicates, about the technical side of theater, focusing on stage design and direction.

This was heady stuff for a theater-queen teen: essays on Wieland Wagner‘s lighting concepts and a first-person piece by Florence Klotz on choosing fabrics for the costumes in the original production of Follies, that sort of thing.

Another costume-focused article detailed the design decisions for the Traviata Frank Corsaro devised at New York City Opera in 1966. That esoteric discussion—about the differences between 1840s and 1850s skirt silhouettes and how “shell pink” was just the right shade for Violetta’s first act dress—led me, fascinated, to hear what sort of music might be going on around all these visuals.  Luckily for me, what I found was the LP version of the opera on RCA starring Anna Moffo, an optimal beginner’s Traviata.

Then, more than a decade later, I read Corsaro’s memoir Maverick in which he described in detail his staging ideas for that 1966 Traviata, and then, another 10 years after that, I got to see a version of that production at New York City Opera, which starred, for the first act at least, Gianna Rolandi. (She canceled and we got, I think, Marilyn Mims. As far as as I know, Rolandi never attempted the role again.)

Even in that tamed-down and definitely dated version of the production, Corsaro expressed a strongly political take on the story.  The dramatic arc was driven by the symbiosis between the seemingly opposed demimonde and bourgeoisie. (That is, the production posited that the demimonde was driven by the bourgeoisie’s need for a sexual outlet after women’s chastity had become commodified.)

The production reveled in making Violetta’s Paris as brassy and shocking as could be supported in an opera house in the 1960s: the goings-on in her salon didn’t look glamorous or even all that much fun. Her life was joylessly hectic.

This was all supported with a wealth of original visual touches. Gastone’s odd momentary interruption of the first act love duet, for instance, actually made sense for about the only time in my experience. He didn’t know he was breaking in on Violetta and Alfredo, because he was so focused on the cute young man he’d just picked up and dragged into an adjoining room for some quick canoodling. (Gastone and his trick eventually went upstairs to Violetta’s bedroom to continue doing the deed.)

Or, in the second act, when Violetta and Germont have it out, Corsaro seated them at a small table where she offered her “guest” a cup of coffee. It made sense that Violetta acquiesced so quickly because in fact she was not really any sort of sexual outlaw: rather, she shared Germont’s Victorian values from the very beginning.

So the final act turned not on everyone else’s finally admitting Violetta was right, but rather on Violetta’s horrific discovery that her own values, the very reason she made her sacrifice and destroyed her life—all of that was wrong. Her fervent embrace of the morality taught to her by society and the church: that’s what killed her. Her nemesis was not her vice but rather her virtue.

Now, you may agree with this take or you may not (just as you may think that having a guy dressed as a gorilla at Flora’s gambling party is either brilliant or ludicrous) but the point here is that over 50 years ago, a director in New York bothered to look under the very pretty wrappings of Traviata in order to try to understand what the piece is really about.

So, this a very roundabout way of getting to the point that after more than half a century, the presentation of Traviata in New York has not only failed to progress, but in fact, has moved in retrograde. Mayer’s Met production (seen April 5) essentially negates not only Corsaro’s work but indeed the very concept of opera as serious theater.

That’s why it’s taken me so long to get to the specifics of the casting of this revival. I mean, if the Met regards this opera as contentless garbage to be Disneyfied for tourists, I don’t see why the fuck I should bother to tell you what the singing was like.

In any event, whatever glimmer of energy this show had was snuffed out when Diana Damrau departed the cast: she carried this production on personality just as she did an antique Puritani in 2017. The new company is in general blandly and drearily competent.

Anita Hartig‘s face and voice are both very pretty and she has a solid high A-natural. Below that note she mostly sings flat.   Stephen Costello‘s singing is blandly even. Artur Rucinski wields a genuine Verdian voice and  has a real feel for the style, so he’s worth watching even though for some reason he’s styled to look like Lionel Barrymore in Grand Hotel.

But, again, why bother? Rucinski’s clearly just filling in until Placido Domingo finishes whatever he’s doing in Dubai or Tokyo or Los Angeles or wherever and arrives to coast through the remaining performances beginning April 13.

Anyway. I hate those “I talked to the person sitting next to me” anecdotes but this one maybe will resonate with you as it did with me.

A young guy in the music business came up and introduced himself at the second intermission, and along the way, he remarked, “You know, I was at Dear Evan Hansen last night and you could hear people sobbing all through the theater. Why isn’t that happening here?”

Good question. Why not?