Everybody loves to break a bough

We owe director John Doyle and Classic Stage Company a debt of gratitude for bringing Blitzstein’s The Cradle Will Rock—warts and all—to the stage. 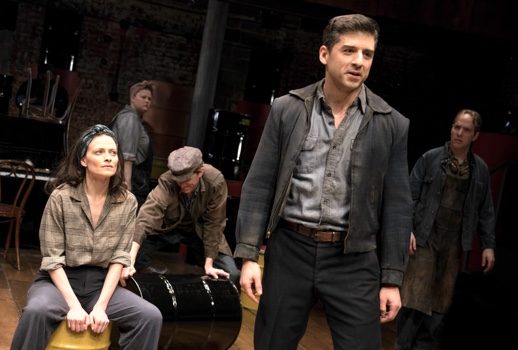 Few theater terms raise my hackles like “Brechtian,” a label that’s often used with smug knowingness, though rarely in any precise way. I dislike it especially when it’s merely a synonym for “edgy.”

Surely, though, “Brechtian” ideally suits Marc Blitzstein’s The Cradle Will Rock, a 1937 musical allegory about greed that was written for the WPA’s Federal Theatre Project—and, very famously, almost didn’t see the light of day.

Cradle is “Brechtian” particularly in that it’s a pallid homage to the genuine article. It traffics in  the style of Brecht—and also evokes a generalized distillation of the ideology behind it—while lacking the rigor, wit, sharpness or, frankly, the musical and lyrical quality of its model.

Essentially, Blitzstein makes the same point over and over again: rich people prey upon poor working people, embodied here as a community of struggling blue-collar types (and, for good measure, a prostitute) in a mythical American city, called… yes, “Steeltown, USA.” (In a similar vein, the town’s boss is “Mr. Mister,” and its chief rabble-rouser is “Larry Foreman.”)

Don’t get me wrong: Blitzstein is on the side of the angels. More than 80 years ago, he was bravely speaking truth to power. Sadly, Cradle feels very relevant today, and we should support it and rise to its implied conclusion that it’s on us to fix our country.

But it’s hard to ignore that the work itself is a theme and variations without nearly enough of the latter. Cradle’s score has the grinding rhythms we associate with Kurt Weill’s Brecht collaborations, but its songs are generally flat-footed and underdeveloped.

A couple—the title number and “Nickel Under the Foot”—might survive outside of the show, but the rest barely support the earnest but shallow book. (It’s especially disappointing since two other Blitzstein theater scores—Juno and Regina—show so much more texture and variety.)

And yet, Cradle is legendary—even (maybe especially) to people who have never seen it, which would be the overwhelming majority of even hardcore theater fans.

Its status is due to its almost-too-good-to-be-true backstory, involving Orson Welles, John Houseman, a ban on performing it, accompanied by a theater lockout (what a fate for a show about unionization!), and a triumphant, unauthorized reprieve in another space.

Details about this wonderful tale—a real gem of theater lore—are worth seeking out, and easily findable in Wikipedia and similar sources. Better yet, watch Tim Robbins’ often excellent film, called Cradle Will Rock (no “The”), but which focuses largely on the ramp-up to the show, with only a small selection of Blitzstein’s actual score. (It’s the right choice in terms of which story is more interesting.)

All of this is to say that we owe director John Doyle and Classic Stage Company a debt of gratitude for bringing Blitzstein’s Cradle—warts and all—to the stage. 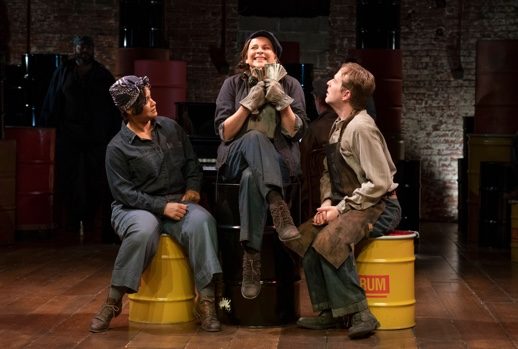 In even better news, it turns out that Doyle’s style is a perfect fit for the show. He’s a demonstrated master of what we might call Brecht-Lite, a pared-down minimalist aesthetic that has a sleekly cool look while often skating across the surface.

I haven’t had much patience for Doyle’s style in the past, but it’s an excellent fit for Cradle, which, as presented here, in a lean 90 minutes with an ensemble of ten performers who stay in stage throughout, is also optimally suited for the Classic Stage Company space.

The cast are similarly dressed—variations on WWII-era work-wear (Ann Hould-Ward did the excellent costumes); in addition to singing and acting, several members take turns unobtrusively providing the piano accompaniment.

Those who have hated past Doyle musical productions that pressed the cast into service as the orchestra—and I’m one of them!—will be relieved to learn that the piano switch-off is handled beautifully.

This is a very strong company, among whom David Garrison (as Mr. Mister) is especially effective, moving from speech to song with seeming effortlessness, and grounding it all in quietly powerful sense of realness.

Tony Yazbeck (Larry Foreman) is nearly as good; he looks like a Walker Evans photograph, and has a heartbreaking emotional translucency. So does Lara Pulver (as “The Moll”) who also sings very well and acts this often-overplayed role (yes, Patti LuPone, I do mean you) with admirable restraint.

Nearly all of the remaining cast act and sing with a real grasp of the style; only Sally Ann Triplett (Mrs. Mister) is overly shtick-y, inserting an unwelcome suggestion of community theater diva in a show otherwise notable for its cohesive teamwork.

Classic Stage has also given Cradle a superb physical production. I’ve already mentioned the costumes; the scenery (by Doyle himself, with an assist from David L. Arsenault) could scarcely be better—the central images of an explosion of telephone wires and colorful oil drums hit exactly the right notes, as does the moody lighting (by Jane Cox and Tess James).

If there are moments when Doyle pushes too hard—as in unnecessarily literal use of money thrown around the stage—well, it goes with territory.

I’m grateful for this opportunity to reach what I fear was the inevitable conclusion—the story surrounding this show is so much more powerful than the show itself. In the end, it’s still The Cradle Will Rock—ultimately, that bough breaks.