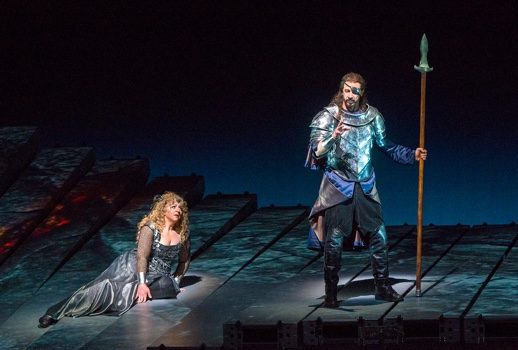 As Wotan’s political infrastructure continues to crumble, certain choices are made; and, consequently, various figures within the intricate narrative take on deeper significance, deploying rhetorical strategies in order make their cases heard.

The political disintegration and rhetorical nature of the opera feel extremely relevant for our own chaotic time. Certainly, nefarious regimes have perversely used the ring cycle as propaganda; and, Wagner’s own ideology is not exempt from post-modern critique.

However, the competing binaries at the heart of the drama remain potent as sites of contesting values: law/grace; justice/expediency; individual/community; loyalty/betrayal; curiosity/obedience. 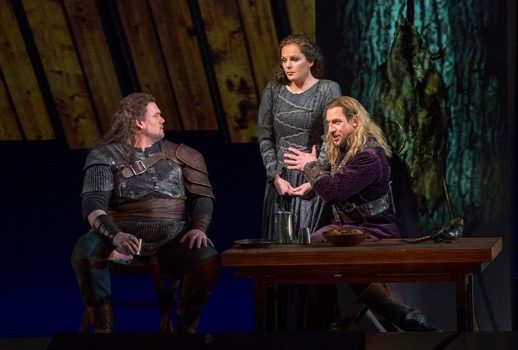 The highly rhetorical nature of the opera, its ability to clarify and contrast distinctly personal values, places the work within the tradition of Greek tragedy and philosophical dialectic. Indeed, what makes the cycle so compelling is its ability to wrestle with impossible contradictions, without ever quite resolving them.

Far too ambiguous and textured to read only as allegory, there is still the feeling that while the gods embody and objectify certain human values, the mortals in the mix are forced to grapple with the ramifications engendered by their conflicts.

As avatars for the gods peering down from Valhalla, human bodies are vulnerable to the inevitable violence of disagreement; flesh is tested against flesh, steel on steel, with each deity backing a horse in the race.

As each rhetor stakes a claim to their particular point of view, they must also hold their own within a competing cosmology of various needs and desires. 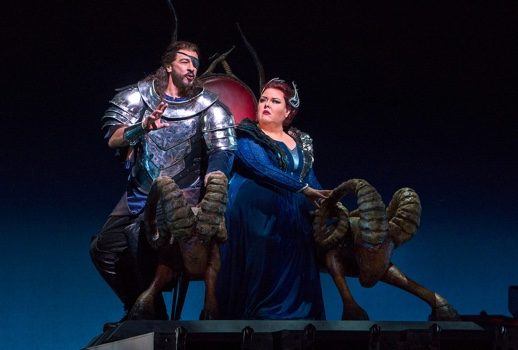 For example, at the Met’s recent performance of Die Walküre, Jamie Barton’s Fricka was a hot sword of self-righteousness, demanding that Wotan honor her position as his wife. She advocates for a lawful order, where oaths and vows hold serious weight.

Singular in her purpose, she confronts Wotan’s contradictions; she is the ultimate wet blanket. Her mezzo-soprano was a scalding flow of torrential heat, but still clean, precise, and focused.

They were a moving pair, defying Fricka’s worldview in favor of a more erotically charged individualism. Skelton’s hefty tenor, especially, was quite beautiful.

Westbroek, on the other hand, was not in good shape vocally—her top was all wobble, colorless, drab. But still, there was something ephemerally luminescent about her; she was an excellent actress, communicative, with an otherworldly presence.

But more central to the evening were Greer Grimsley as Wotan and Christine Goerke as his rebellious daughter, Brünnhilde. Goerke was uniquely impressive for her clean, lyrical singing. She was musical; she was audible. But more importantly, she brought a profoundly human dimension to the character.

Her Valkyrie entered the narrative vibrating with optimistic hubris. Her Hojotohos rang through the house. But as she came to grapple with various competing interests—her father’s wants and her father’s duties—her portrait of the character deepened, tracking a burgeoning political consciousness.

She was a young woman stepping into perplexing moral conundrums; she managed to be both callow and noble at the same time.

The culmination of Wagner’s intricate structuring occurred in the final scene between Wotan and Brünnhilde, when the ramifications of old choices became apparent in a moment of white-hot revelation. Grimsley and Goerke’s performances made the costs of politics quite tangible.

Familial ties were broken. Their splintering trajectories provoked a scene of haunting beauty and grief that felt extremely relevant and timely.

And special mention must be made of the Valkyries, Brünhilde’s eight sisters, all uniformly excellent. Their presence at the beginning of Act III injected a dose of adrenaline into the long evening, their collective moxie matching Wagner’s rousing score.

The evening’s weakest element, and perhaps its most salient, was the orchestra: sloppy, out of tune, and feckless. Philippe Jordan’s conducting has not evolved since he began the cycle with Das Rheingold. For any other piece, this would be disappointing; in Die Walküre, it was unforgivable.

That being said, this particular iteration of the opera offers much to sell. Robert Lepage’s production continues to be conservative, yet inventive, with flashes of grandeur.

For its part, the notorious machine maneuvered with ease, showing no signs of malfunction. Mostly it remained a subtle, unobtrusive mechanism, embellishing the storytelling, but not stealing focus.

Certainly the production might seem a bit tame for the more adventurous operagoer, but the Ring Cycle seems incapable of notbeing a continuous point of contention—not everyone can be happy with any onereading of the text.

But I’m willing to wager that, as is often true, this perhaps only points to the deconstructive capacities attending all works of genius.