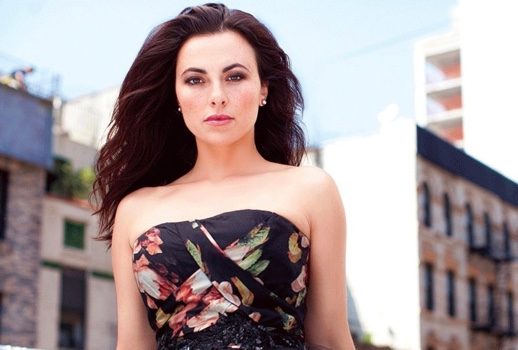 I’ve never liked the term “crossover.” It makes it sound like such a big deal—a rite of passage almost, or at least something that requires a roadmap and a visa. Why can’t we just have classical singers doing popular music (also the other way around, though that’s rarer) working with their own sound and instincts to explore another idiom?

I like to think Leonard Bernstein would agree with me—he was, after all, the King of (oh, alright) Crossover.

The latter also served as a charmingly conversational spirit guide, putting the material in context and giving the occasional vocal assist when duetting was necessary.

If the recital was entirely suitable for the chamber-size Perelman Theater in the Kimmel Center (and it was), it would have worked as well at Feinstein’s/54 Below or the Café Carlyle.

Actually, I wish Leonard had dispensed with one unwelcome vestige of the recital hall: she used a music stand, which should hardly have been necessary for a recital of entirely English-language (and frankly, not exceptionally difficult) material. It put the chatty mezzo, a communicative artist who speaks directly to the audience, at a disadvantage

Still, in their very first selection—“A Little Bit in Love” from Wonderful Town—the two made pretty much the best possible case for themselves as natural Bernstein-isti. Sperling’s witty playing brought a tart suggestion of jazz to the accompaniments.

Leonard’s smooth, pearly tone, rich but girlish, was a natural fit for Eileen, and her rhythmic flexibility and characterful delivery of the text were very welcome. The closing song of the official program, the ravishing “Some Other Time” from On the Town, was similarly winning.

In between there were more hits than misses, though it was a mixed bag. Frankly, some of the low points were Bernstein’s fault—for all his stellar gifts, his songs meant for the concert platform are often cloying and insubstantial.

Even in the best moments, the program worked better in individual bites than as a totality. Lovely as Leonard is, she’s not a vocal or theatrical chameleon. She sounds pretty much the same in everything, whether it’s the lyrical “My House” from Peter Pan, which suits her, or the impetuous “Something’s Coming,” which doesn’t. Taken together, there was a too-great sense of homogeneity.

Rather ironically, Leonard seemed not operatic enough for the two numbers that came from Bernstein’s classical repertory. “Take Care of This House,” Abigail Adams’ anthem from the 1976 legendary flop 1600 Pennsylvania Avenue, now displays a new sense of topicality and urgency in our dire political climate. It’s a powerhouse solo, but it requires grandeur and sweep beyond what Leonard has to offer.

A rather different problem was her winkingly coy take on Dinah’s “What a Movie!” from Trouble in Tahiti, which missed the point of the scene. It’s meant to be at least as sad as it is funny: though Dinah may dish the B-movie she’s just seen, nonetheless she’s besotted by it as an escapist dream-come-true—so much more real to her than her own life.

On the other hand, Leonard is really too operatic for “Carried Away” from On the Town. The piece is meant to be an opera parody—it needs to sound like she’s trying on a costume, as it were. (The great Betty Comden’s delivery is sheer perfection here.)

Still—the positive elements outweighed the misguided ones. Leonard and Sperling closed the afternoon with two delightful encores: “I Am Easily Assimilated” from Candide, which allowed the singer to display a mischievous Latin side; and a lump-in-the-throat, sing-along “Somewhere.”

The audience went home happy, that’s for sure.