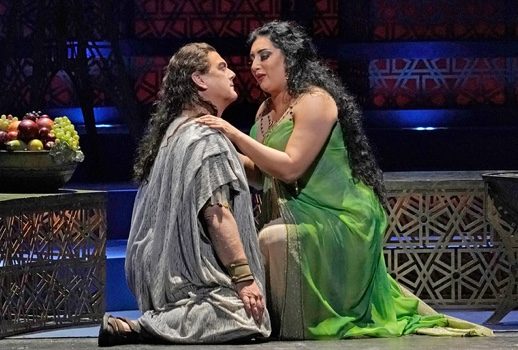 It is not often the most memorable part of a production is the act-three ballet. Yet, in Darko Tresnjak’s production of Samson et Dalila (which opened at the Met last fall), Austin McCormack’s lascivious choreography outshone a tepid and tedious staging of Saint-Saëns’s old-testament epic.

The third act’s bacchanal is one of the opera’s musical highlights, with its sybaritic oboe cadenza and throbbing timpani groove and McCormack’s choreography only served to heighten its dramatic effect.

Heart-stopping, muscular, pornographic, McCormack’s ballet sizzled with a touch of Rite-of-Spring modernism (and more than a hint of Miley Cyrus), complementing the pulverizing energy of Saint-Saëns’s score.

The Met’s dancers (scantily clad in loincloths and body paint) writhed and gyrated around the stage in suggestive, angular movements, clambering up the 40-foot male torso (ostensibly the Philistine god Dagon) which constituted the third act’s set.

The ballet’s heady mix of (homo)eroticism and high modernism was one of the few times this production lived up to the aesthetic demands of the opera. By contrast, Tresnjak’s staging seemed rather staid, stripping the opera of any sense of tension or urgency.

The characters spent most of their time standing around awkwardly in tired, wooden tableaux, seemingly alienated from one another and from the dramatic action.

Furthermore, Dalila’s betrayal should be a deception of—shall we say—biblical proportions, yet, by the third act, Tresnjak had set the stakes so low that her taunting of the blinded, humiliated Samson seemed undercooked.

Even Dalila’s entrance at the end of the first act, which should be a breath-taking moment, was utterly lackluster: Dalila merely parked-and-barked her aria, “Printemps qui commence,” surrounded by a gaggle of aimless-looking chorus members, as Samson loitered downstage.

If Tresnjak’s goal was a more restrained, more nuanced (perhaps even recuperative) take on the nineteenth-century femme fatale, then he only succeeded in stripping Dalila of any agency, painting her as a quiescent pawn in a testosterone-fueled battle of one-dimensional religious zealots.

Tresnjak’s staging seemed all the more tired against Alexander Hodge’s drab sets (which, for the most part, looked like the sound-stage of B-grade 1970s sci-fi), and Linda Cho’s school-nativity costumes. Often, the set and costumes seemed to get in each other’s way, with Dalila’s faux-chiffon and Samson’s tea-stained rags occasionally snagging on Hodge’s aggressively-trellised facades.

The only scenery which came close to capturing Samson et Dalila’s complex mix of violence, lust, and spectacle were the proto-paleolithic handprints which covered the pre-show curtain, and the third act’s towering, metallic, (and unapologetically beefy) torso. It is a sad indictment of Tresnjak’s production that the set often exuded more sexual energy than the drama itself.

Despite the production’s failings, the cast delivered searing performances across the board, although they often seemed to battle against the staging’s general inertia. Gregory Kunde, a last-minute replacement for the ailing Aleksandrs Antonenko, hammed it up as Samson, as if compensating for the production’s lack of momentum.

After hearing a very sick Roberto Alagna struggle through the role of Samson when this production opened last fall, it was nice to hear Kunde make the role seem almost effortless. Kunde sang with a warm, rounded tone, lending a softer-edged sound to Samson’s high-octane sermonizing.

Although Kunde was, for the most part, robust and even throughout his range, he thrilled most in the second act as he explored the coarser edges of his middle register, allowing his voice to bloom more freely as Samson’s desire intensified. Kunde’s act-three “Vois ma misère, hélas” had a magnetic lyricism, which was soon transformed into steely defiance in the lead-up to the opera’s dénouement.

Anita Rachvelishvili delivered a stunning performance as Dalila, a thoughtful and elegant take on the notorious seductress. Rachvelishvili’s attention to detail, the finesse with which she shaped Dalila’s phrases, brought out the subtle dramatic inflections of Saint-Saëns’s word-setting.

Yet Rachvelishvili was never afraid to embrace the character’s uglier side, underpinning Dalila’s deception with moments of guttural bellowing.

In the first act, Rachvelishvili barely sang louder than a mezzo-piano, finding fragility and grace in “Printemps qui commence.” In the second act, however, Rachvelishvili delivered some of the opera’s most impassioned singing, liberally flipping between her signature gut-punching chest voice and a delicate cantabile.

Her “Mon cœur s’ouvre à ta voix” was mesmerizing, Rachvelishvili balancing buoyant musicality with libidinal drive. In the third act, her sound was brighter and more open as she embraced the hedonism and fervor of the Philistines’ sacrificial rites.

Laurent Naouri’s High Priest had a menacing vitality; Naouri matched Rachvelishvili’s gutsy singing with a vibrant high register and snarling parlando. In the final act, he taunted Samson with syrupy malice, his gloating made all the more sinister by a sweeter, richer tone.

Sir Mark Elder led the Metropolitan Opera Orchestrathrough Saint-Saëns’s score with lightness and restraint, reveling in the opera’s more reflective moments. However, I craved a harsher sound during the Philistine’s third act revelry and rougher blend in some of Saint-Saëns’s more unusual textures.

The orchestra was at its most radiant in the short interlude linking the fourth and fifth scenes of the first act, with finely-tuned woodwind playing adding a shimmer to Saint-Saëns’s sparser textures. Similarly, in the shuddering opening of act two, murmuring woodwind arpeggios conjured the kind of ominous atmosphere that Donald Holder’s garish lighting design never quite achieved.

A special mention must go to the Met’s ophicleides, who accompanied Tomasz Konieczny’s growling Abimélech with a malevolent blare.

The Metropolitan Opera Chorus were also on strong form. The first act’s complex choral fugues showcased the ensemble’s pin-point accuracy, even blend, and razor-sharp diction. The Met chorus were percussive and dexterous in act three as the jeering and cackling Philistines, responding deftly to Elder’s brisk baton.

It was a shame that this talented ensemble was often reduced to mere set dressing in a production that somehow failed to enliven one of the most dramatic operas in the French repertoire. 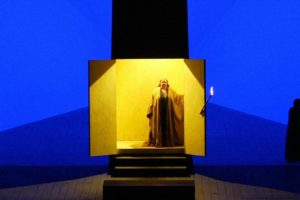 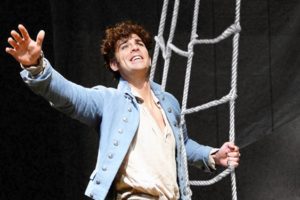 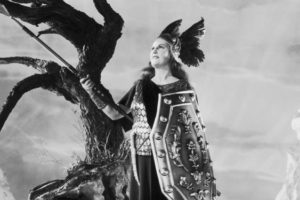 Daughter of the gods 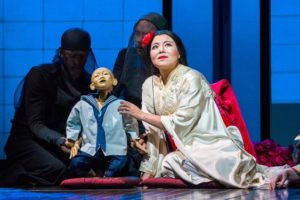