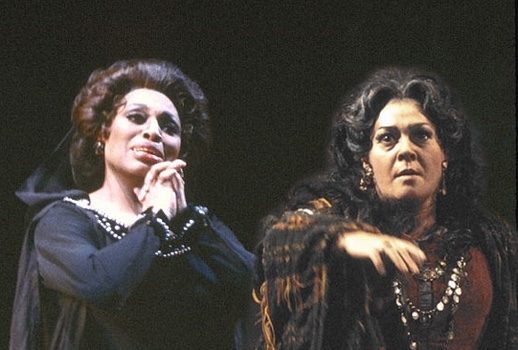 Despite its high-powered international cast, this Buenos Aires Verdi is a very un-Met performance. Although they performed together there more than 20 times in six different works, Price and Bergonzi never met in a Met Trovatore.

In fact, despite Bergonzi having opened the 1959-60 season in the role, he never sang Manrico again at the Met after Franco Corelli made his debut opposite Price in 1961. Once Corelli retired, Bergonzi only returned to Manrico on the Met 1977 tour opposite Cossotto and Renata Scotto.

Price and Cossotto sang Trovatore numerous times at the Met but never together despite their collaboration on the acclaimed studio recording under Zubin Mehta.

They would reunite eight years after these performances (alongside Cappuccilli) at the 1977 Salzburg Easter Festival when the Manrico was Franco Bonisolli. And we all are familiar with the sad tale of Cappuccilli’s absence from the Met except for his single performance as Germont in 1960.

This is Ms. Price’s belated “Trove Thursday” debut in a full-length work but there will be at least one more upcoming in 2019.

Trovatore can be downloaded by clicking on the icon of a square with an arrow pointing downward on the audio player above and the resulting mp3 file will appear in your download directory.