The Metropolitan Opera delivers on the promise of Wagner’s Gesamtkunswerk in a revival of Robert Lepage’s Ring. 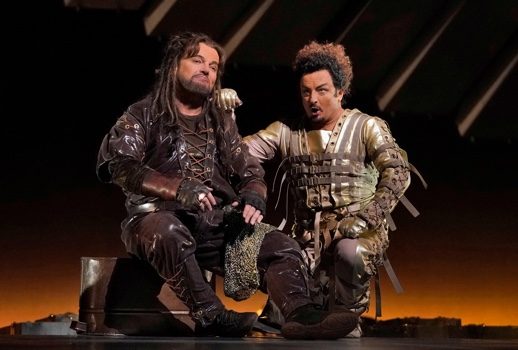 The Metropolitan Opera delivers on the promise of Wagner’s Gesamtkunswerk in a revival of Robert Lepage’s Ring.  The first installment, Das Rheingold, initiates one into ancient mythology and the composer’s harmonic landscape with conservative elegance.

Indeed, accepting Wagner’s text at face value is not a poorly considered approach. Such a large tapestry of topoi and plot demand precision and clarity—something Lepage’s production delivers. With a notoriously temperamental “machine” rising, swinging, folding, and twisting at the whim of narrative, the production offers cinematic sweep within the realm of theater.

Lepage’s machine (what else does one call it?), despite its technical difficulties in the past, suits an artistic work containing machine-like qualities. The set’s monolithic dimensions and steadfast, mechanical movements create a feeling of inevitability; this is relevant to the consequential register in which Das Rheingold operates.

The plot of Der Ring des Nibelungen unravels with startling momentum, like a colossal row of dominoes. Beginning with that terribly slight act of legerdemain when Alberich snatches a nugget of gold from the Rhinemaidens, Der Ring tracks the destructive path of accumulating and unstoppable political unrest.

Central to a narrative of radical decay is the political economy upon which the plot hinges. Wotan, lord of the gods, must pay the giants Fasolt and Fafner for building him a castle. In exchange for their labor, Wotan promises the giants Freia, his wife’s sister. However, Freia is a costly price because she is the goddess of youth—if she leaves, so do the deities’ vim and vigor.

At the suggestion of Loge, a demigod of fire, Wotan offers the giants a different prize in exchange for their work: the gold and treasure accumulated by Alberich, as well as his ring forged from the Rhinegold.

It is difficult not to impose modernity on such ancient material, especially within the economically stratified sphere in which the opera was composed. And it only feels natural to read politics into Das Rheingold, where a ruling class struggles to maintain control of the proletariat.

However, while a Marxist/Feminist dialectic might be productive for analysis, it doesn’t necessarily mean it would be fun to perform and watch.

Enter Lepage. What the director does best is infuse these proceedings with a childlike wonder. For example, it is hard to discount the sense of astonishment one feels at the tableau unfolding in the first scene, the sense of optical displacement invoked by the Rhinemaidens floating in clear water.

Their flippers brush against the riverbed and send pebbles askew.  Sunlight strikes the precious gold and illuminates the Rhine. And it is hard to dismiss the vertiginous effects of watching the gods proceed into Valhalla, over a rainbow, from a birds-eye view.

I am impressed when one finds creative gestures through conservative means—indeed, that might be the very game of form. In his effort to breathe new life into very old forms, Lapage doesn’t try to reinvent the wheel.

This is not some clever Regietheater production seeking to outsmart its audience. I’m talking meat and potatoes.

Where others might try to subvert and agitate, Lapage hunkers down and delivers the best version he can of an old story. The model upon which his artistic filigree rests is really quite traditional. I find this sensible, satisfying, and safe. It is not the only way to probe Wagner’s text, but it is certainly legitimate.

However, in order for this approach to work the singing must be beyond reproach. Otherwise, the performance becomes rote and uninteresting.

The current cast was extremely good, with a majestic Greer Grimsley, as Wotan, leading the pack. But Jamie Barton as Fricka, Wendy Bryn Harmer as Freia, and Karen Cargill as Erda were fast on his heels.

Tomasz Konieczny made a striking debut as Alberich (he thankfully avoided caricature), as did Norbert Ernst as an oily Loge. Amanda Woodbury, Samantha Hankey and Tamara Mumford were the ultimate girl group, frolicking as highly choreographed Rhinemaidens; their vocal passages were awash in rich color.

Regarding the orchestra, I found their presence serviceable—an ambiguous summation, in light of their absolutely essential role in enacting Wagner’s vision. There was something imprecise about Phillipe Jordan’s conducting. It lacked friction and heat; I wanted for more razor-edged specificity. Moreover, to my ear, there were a few intonation problems.

Sometimes, in its most confounding exercises, the Met appears to resist its own strengths. And at times it can feel like the company has a fundamental misunderstanding of what the operatic form enables.

The house, in its desire to access new markets, tends to sacrifice its own inherent virtues for the sake of something outside its wheelhouse. It denies its own capacities for gorgeous singing and creative direction in favor of HD friendly performances and watered-down productions.

But fear not: Das Rheingold shows its mettle and resists dilution, delivering a straightforward, substantial reading of an endlessly fascinating text.