Russell Thomas's opening aria, “Del piu sublime soglio” displayed an intense attention to the text and some surprisingly beautiful piano phrasing that I’ve never heard risked before and it brought wonder and gooseflesh. 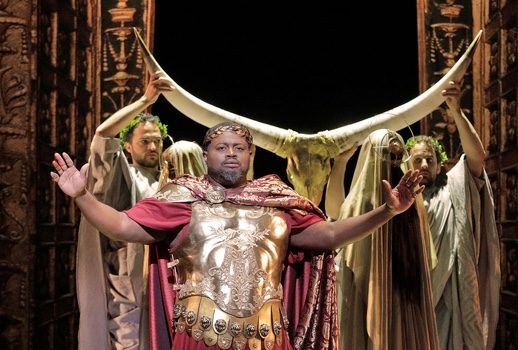 My guess is that I was introduced to Mozart’s final opera seria, La Clemenza di Tito, the same way that most of us were via the release by Deutsche Grammophon of Jean-Pierre Ponnelle’s film version which immortalized his famous Salzburg production. By the time I got around to seeing it (on Laserdisc, remember those?) I was already familiar with M. Ponnelle’s  production style with the crumbling edifices and ersatz 18th century costumes.

Yet I sat on my couch agog at the size and scope of this production. I called my voice coach at the time expressing bewilderment at the bazillions of dollars it must have taken to construct these sets.  She replied tartly, “They’re the ruins of Rome you boob!” You can tell I was raised on a very high level of Hollywood production values.

Our Music Director James Conlon does the pre-game lecture in the big reception area on the second floor of the Dorothy Chandler Pavilion. I’m consistently surprised at how it’s standing room only while Maestro Conlon shares his insights with a very diverse crowd about the evenings presentation.

He’s informative, full of historical and musical tidbits that surprise even me, and never, ever, condescending. You can feel his joy in music making and he’s dedicated to sharing it with all of us. The man talks for 45 minutes solid, usually right up until 10mins. to curtain, leaving us all scrambling to get to our seats but more excited to be there than when we arrived.

Last night was no exception and, with his ipod crammed with musical excerpts, he showed us the similarities between the four last works that Mozart wrote. Starting in early September of of 1791 with Die Zauberflote, then the Clarinet Concerto in A Major, La Clemenza di Tito, and his Requiem which was left unfinished at his death on December 5th of that year.

We also got a brief runup on the Roman history of the era in question just to prove that the libretto is  a work of fiction.

The plot in question involves Emperor Tito’s perspective choice of bride, one of whom is discussed but never makes it onstage, and  the lengths the characters are willing to go to make certain their choice joins him on the throne or has revenge for being slighted. Results include a plotted assassination and the burning of Rome for the finale of Act I.

An impressively strong cast was assembled starting with James Creswell with his unusually crisp and articulate voice as Publio holding down the bass clef in the ensembles.

The Annio and Servilia where Taylor Raven and Janai Brugger and they made a luscious pair. Ms. Raven, last seen here in November as a resplendent Sandman in our Hansel & Gretel, is a current member of the Domingo-Colburn-Stein Young Artists program.  She made a fine impression as the uncertain patrician.

She was suitably righteous in her Act II aria, ’Tu fosti tradito,” begging for her best friend’s life. If she was very briefly challenged by the composer’s more exacting fioratura I blame Herr Mozart’s ungainly writing which I have yet to hear anyone sufficiently conquer. There I said it.

Ms. Brugger, who has ruled the stage as Musetta in La Boheme here so completely she was asked back a second time, was a gossamer Servilia. She moved beautifully all evening and her last act showcase, “S’altro che lacrime” was one of its highlights.

I don’t think this little aria has ever made such a great impression on me until now thanks to her generous phrasing, opulent high notes and a penultimate pianissimo echo effect at the climax that set ears tingling. She and Ms. Raven took every musical advantage of their Duetto in the first act, ”Ah Perdona” which certainly ranks among the top of Mozart’s greatest moments of inspiration. Time stood still.

Interesting that both the travesti roles, Annio and Sesto, were given beards as part of their makeup plots and in the case of Elizabeth DeShong it worked well to her advantage. She has a baby face and the beard at least solidified the impression of a young man.

Having enjoyed her in a number of roles now, live and on video, I was looking forward to hearing her bring her formidable technical skills to Mozart’s tormented anti-hero. She did not disappoint. Maestro Conlon, when mentioning some of the more virtuosic moments in the score in his lecture pointed out that Ms. DeShong likes to sing fast.

Her “Parto, ma tu, ben mio” was a miraculous combination of breath and skill so ferocious it would be hard to better. The monumental runs at the piece’s finale were perfectly articulated, at a dizzying speed, without an over indulgence of aspirants separating the notes so her line was uncommonly clean.

She also rang out so forcefully a few times towards the end of the evening I couldn’t help to imagine that there’s a baby Amneris in there somewhere. She’s an ernest actor and my only wish is that someone in the costume department would have invested in a pair of ‘General Marilyn Horne’ boots to bring her closer in stature, as a young man, to her colleagues onstage.

The role of Vittelia, the intrigante of Rome, was taken by Guangun Yu. I have already enjoyed Ms. Yu as Rosina in The Ghosts of Versaillesand the Countess in Le Nozze di Figaro closing a casting circle in the  2015 LA Opera “Figaro Trilogy.”

In both operas she displayed an uncommon poise and gleaming voice. Her Vittelia added a level of technical skill that had only been hinted at plus added a fierce attack that was most welcome in one of Mozart’s most bloodthirsty (and enjoyable) villaines. It’s a welterweight size voice that easily distinguishes itself in ensemble and has a particularly beautiful, and clear, top.

In a role that would challenge any singer’s coloratura facility she effortlessly dispatched runs, trills, and staccatos, with aplomb. The quicksilver D at the finale of the Act I Terzetto, “Vengo…” held no terrors for her and her earlier, “Deh se piacer” was radiant and assured.

The great litmus test for Vittelia’s is, of course,  her grand scena, “Non piu di fiore” and Ms. Yu pulled out all the stops including an added cadenza that brought her up into the stratosphere (brava) before she plunged down into the earth’s core for the duet with the basset horn at the finale.

The Emperor Tito Vespasian was given to Russell Thomas who just last summer had success in this role in a new production at the Salzburg Festival directed by Peter Sellars. Having heard Mr. Thomas on two occasions as Puccini’s Cavaradossi and as Bellini’s Pollione did little to prepare me for his expertise in Mozart.

His opening aria, “Del piu sublime soglio” displayed an intense attention to the text and some surprisingly beautiful piano phrasing that I’ve never heard risked before and it brought wonder and gooseflesh. Sublime indeed. In the recitatives his authority was total and his voice rang out in true Heldentenor fashion to my surprise and delight.

Some composers show little affinity for the tenor voice in their writing (Richard Strauss, Beethoven) and I could compose an essay on how Mr. Thomas thoroughly and elegantly conquered every challenge in his path to mold his character through his vocalism. In the last Act Tito’s aria, “Se all’impero” is nothing short of a vocal minefield for the tenor.

Mr. Thomas ripped into it with such ferocity that fully a quarter of the audience burst into applause at the end of the A section before the da capo. I have no higher praise. Now I want to see his Idomeneo. He was also a far more commanding presence on stage than I had previously seen him and now I’m sorry I missed his fledgling Otello at the Hollywood Bowl under Dudamel this past summer.

Maestro Conlon in the pit proved once again how adept he is with Mozart and I would be hard pressed to find fault in his performance as a conductor or accompanist. In an opera where the utmost care has to be taken to sustain not only the musical architecture but the theatrical tension his constant bridging of tempos were perfectly judged. His support of the cast also showed an eagle eye to smooth the rare vocal misstep. The LA Opera Orchestra played with a suppleness and refinement that I’m now coming to expect from them.

With all this musical glory I’d love to be able to report that it was showcased properly and to a certain extent this production will satisfy those of the audience who are looking for a traditional Mozart staging. Thaddeus Strassberger, who gave us our recent Nabucco is here also presented as Stage Designer and Director.

His set is framed by glittering gold and ebony Roman columns with a large curtained window. Projections of classical paintings of Rome are thrown onto the curtain and used as a backdrop behind. This culminates in a final tableau reminiscent of the great Dutch painter Lawrence Alma-Tadema replete with his famous gleaming white marble and bowers of pink roses.

The problem lies in this production being obsessed with its own opulence at the expense of dramatic values. The stage is crammed with superfluous objects and people carrying out tasks that pull attention constantly from the singers. Tito’s opening aria becomes an excuse for a picnic with Sesto with Publio and his retinue sharing fruit as backdrop.

Chargers and torchieres are carried on and off and at one point the stage apron is covered with the busts of every Caesar. At the finale of Act I for the great quintet the set was bisected front and back by the palace gates with the principals on the wrong side looking through to the audience while the chorus, normally offstage at this point, occupies the sides.

Ms. Yu starts her great final scene in a fantastic darkened stairway with a crimson train measuring twenty-five feet handled by her ladies in waiting. This tableau alone has the makings of great theater if only Mr. Strassberger had left well enough alone and not directed Ms. Yu into a series of positions that were increasingly less visually powerful.

During the climactic portion of her scena a flowered carpet descends from the flies (the pre-bower roses which requires more ladies in waiting to handle) undercutting the most gala part of her performance.

From a design standpoint there are simply too many elements on stage and none of them unifying enough to bring about a cohesive whole. The costumes of Mattie Ullrich are opulent but become such a riot of color and design as the evening progresses it makes one wish for some subtlety.

Lighting by JAX Messenger and projection design by Greg Emetaz are tremendously atmospheric. All the gold glitters and the smoldering ruins of Rome at curtain up on Act II were much appreciated by the opening night audience.

So even in a production where ‘more isn’t more enough’ there are still so many moments where Mozart rings out around you and fills your ears making you so grateful to be alive to hear it.  Five more performances through the end of March so don’t fiddle while Rome…