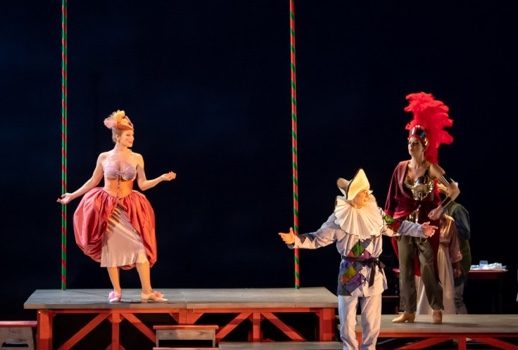 Isn’t it ironic that Baldassare Galuppi (1706–1785), “the father of comic opera”, is completely forgotten today?

This was the man whose works in collaboration with playwright Carlo Goldoni advanced the popularity of drama giocoso, and provided the blueprint of generations of opera buffa that followed. He introduced elaborate extended finales, perfected by Mozart and Rossini later on.

That two most influential playwrights and poets, Carlo Goldoni (for opera buffa) and Pietro Metastasio (for opera seria), both wrote libretti for Galuppi, many of those were adapted in centuries that followed.

Galuppi was born on Burano in Venetian Republic, and he spent pretty much all his life in Venice, holding various posts including maestro di cappella at St Mark’s Basilica. Despite that, he achieved international success in Vienna, London and Saint Petersburg; he and Gluck were at one time two of the highest paid composers of the 18th century.

Galuppi and Goldoni shared mutual respect, most importantly in recognizing the importance of both drama and music; music was no longer just to support the action (in contrast to Metastasio’s view of opera as a play performed by actors who can sing). In a sense, they were building the foundation for what modern operas became eventually.

The equal importance of both the vocal and the instrumental was clearly demonstrated in Galuppi and Goldoni’s 1750 dramma giocoso titled Il mondo alla roversa, and the radiant score were on full display Friday (2/15) night at Cité de la musique as performed by Françoise Lasserre conducting Orchestre Akadêmia with a group of talented young soloists and Chœur de l’Opéra Grand Avignon.

The one-night only production, a co-production with Opéra Grand Avignon and Opéra de Reims, was playing in both opera houses prior to this night.

The full title of the opera pretty much describes the plot: Il mondo alla roversa osia Le donne che comandano (Diego Fasolis’ 2001 recording translated it as The world turned topsy-turvy, or Women in Command). In short, a metaphorical “island in the Antipodes” is governed by a “council of women” who has assumed power over men.

In Act 1, the three protagonists, Tulia, Cintia and Aurora, are shown dominating their men, namely Rinaldino, Giacinto and Graziosino respectively. Aurora decides to conquer Giacinto, and Cintia finds out, leading to confrontation of the three. Act 2 opens with the council reconvenes and the three women bickering over power.

Tulia suggests to form monarchical government with a single woman on top, but when the council votes, none gets picked, as “no lady will consent to be subject to another”. A rebel, Ferramonte arrives on the island and, in a Mephistophelian role, tells Rinaldino that he refuses to be conquered by women.

Giacinto is forced by Cintia to kill 100 women, and the first one he sees is Aurora. Aurora tricks him and he reveals that it is Cintia’s order. Feeling justified, Aurora convinces Graziosino to kill Cintia. The four characters clashes in long finale. Act 3 is the shortest of all, where all women finally submit to their men, much to Ferramonte’s satisfaction.

When this was announced, I was very intrigued how they would stage this, especially since the theme is so politically incorrect in today’s environment, even though it’s a satire (Look what’s happened to The Mikado!) After all, the final chorus spells out the moral of the opera:

(Women in command
make for a topsy-turvy world
that is inevitably doomed to failure.)”

For that reason alone and the opportunity to experience Galuppi live on stage, this was my most anticipated show this winter. After all, who doesn’t love good chaos, right? (Here’s looking at you, Les Troyens!)

Director Vincent Tavernier solved the problem by providing a frame and setting the whole opera as a dream. At the beginning, during the Ouverture, the Aurora character was shown to be a modern housewife with an uncaring, bossy husband. They went to bed, and after she was dreaming of rowing away to the sea, the whole island inhabitants appeared on stage to start Act 1.

The ending was decidedly ambiguous, as Aurora was seen to enter said bed with Ferramonte, and woke up with her Graziosino character. (Maybe she got her wish come true finally?) Although setting opera in a dream is getting cliché, in my opinion, in this case it did help mitigating the problematic tone of the opera, as the audience that night seemed to have fun and didn’t have troubles with it.

Tavernier’s semi-staged production was charming and wildly inventive, particularly in the first two acts. Claire Niquet’s sets reused many props for multiple usage, many times they were played for laugh.

The aforementioned bed, for example, became Ferramonte’s ship in Act 2, complete with its sails. A pole covered with clothes turned into voting booth where the women foreseeably dropped their red ballots to a bowl, but when the bowl turned upside down, nothing came out. (It’s magic!)

A piece of golden cloth with opening on top indicated a castle for the complicated double murder plotting that hilariously ended Act 2. Unfortunately, the ideas run their course in Act 3, where I felt that using just a simple blanket didn’t help to explain why the women finally submitted to their men. Still, I think the whole performance was a winning one, and they helped greatly to liven up the night.

Erick Plaza-Cochet,though, spared no expense on the costumes, as they were luxurious and colorful. Although showing no specific time period, the clothes felt like a hotchpotch of influences, mostly dominated by British Victorian style.

The leads all wore different dresses; Aurora in pink Disney-style gown complete with the hairpiece (because of the name, I assume?), Tulia in British headmistress attire, and Cintia was in a cross between Roman general (with gold breastplate) and Vegas showgirls (golden helmet with long pink boas attached on top).

The men’s clothes were even more specific; the two baritone roles (Graziosino and Giacinto) specifically dressed as Pierrot and Harlequin, while Rinaldino simply as a shepherd. Thank goodness that Ferramonte was NOT dressed as Jack Sparrow as that was so overdone; instead he resembled Henry Hudson, complete with his ruff collar!

True to that vision, she didn’t shy away from taking interesting, and at times potentially controversial, such as this one and 2013 Orfeo, Crossing the Ganges, mixing Monteverdi work with Hindustani music to retell the story where Eurydice was a dancer dedicated to Shiva (I wish I could see that!)

It was clear this project was a labor of love, as Lassarre and her orchestra truly sparkled that night. Playing it lively and transparently, the 21 musicians made the best case for Galuppi’s opera, as they brought out the strong qualities of drama, comedy and even caricature. The highs and lows were craftily sculpted, and the pace just felt right.

I liked that Laurent Stewart’s harpsichord continuo was used sparingly. Chœur de l’Opéra Grand Avignon did sing well that night, and filled up the space with their presence, representing anything from council of women to Ferramonte’s fellow shipmates.

The variety of voices that Galuppi employed for this opera was pretty illuminating; the three protagonists were a soprano (Tulia), a mezzo-soprano (Aurora) and a contralto (Cintia) and correspondingly, their partners were in matching voices: a soprano for Tulia’s Rinaldino, a (high) baritone for Aurora’s Graziosino and a (deep) baritone for Cintia’s Giacinto. This is probably the only opera (at least, what I’m aware of), where the bad guy is a tenor!

Dagmar Sasková, who performed frequently with Lasserre, returned here as Aurora, the pivotal role in the Tavernier staging. She had a lovely mezzo voice, well supported for coloratura passages, and a good look, perfect for Aurora. She acted the role as an amorous vixen, beautiful but deadly, so it was no wonder that she involved in both confrontations that ended Acts 1 and 2!

As the wise Tulia, Marie Perbost had a bright and clear tone that scaled up and down the score with ease, and she did sound matronly (well supported by her costumes), just like what a councilwoman should sound. I particularly loved her rendition of the first aria “Fiero leon, che audace”, sang against agitated strings, where she compared men with chained lions!

Unfortunately, the last of the three protagonists Cintia, sang by Alice Habellion, didn’t impress me as much as the other two. Habellion had a good presence, but I felt like her lower notes rather nonexistent, and she tended to get drowned by the orchestra, particularly from the balcony where I sat.

The role of Ronaldino was written by Galuppi for the leading soprano at his time, and he supplied the role with difficult arias, particularly the showstopper “Nochier che s’abbandona”, which at this performance came right before the break. (The virtuosity and the placement of this aria reminisced of Mozart’s “Martern aller Arten” that came 30 years later.)

Armelle Marq sang and acted earnestly, unfortunately her top notes sounded strained. That song turned into an edge-of-the-seat moment for me; I couldn’t stop thinking that she would break as the song got higher and higher!

The two baritone roles couldn’t be any more different. Olivier Bergeron’s Graziosino sounded wimpy and underwhelming, although it was not inappropriate with his Pierrot costumes and submissive characterization.

David Witczak, however, was impressive as Giacinto. Employing a full round voice, Witczak worked very hard to portray the vain and clueless character (who thought himself as Adonis), and he provided the many comic moments of the night.

As Ferramonte, João Pedro Coelho Cabral stole the scenes every time he appeared with his bright tenor voice and great comic timing. In a character that could be interpreted in so many different ways, Cabral (and director Tavernier presumably) chose a happy pirate persona, played obviously for laugh.

This was understandable, as his lines were the most potentially problematic ones among all characters.

In summary, this was truly a great presentation of this Galuppi-Goldoni gem, and it did showcasehow charming the score truly was. I was so glad to find out about this performance. It’ll be a pity not to be able to hear this ever again, especially in such a fun production like this!