A view to a kill

You'd want to expect that every Met retread would draw the same curiosity, the same large crowds, to Lincoln Center. 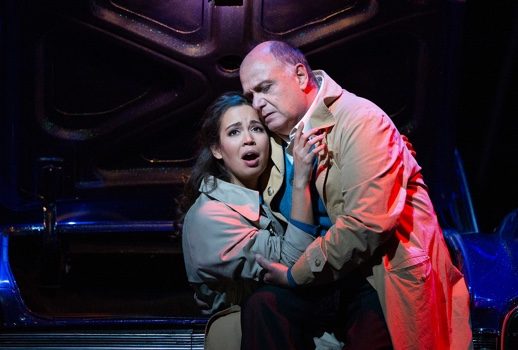 Reviewing Michael Mayer‘s “Rat Pack Rigoletto” for the Times back in 2013, Anthony Tommasini pondered who, exactly, this Vegas retelling was for.

“I wonder if Peter Gelb, who brought Mr. Mayer to the Met, thinks that new young audiences will relate to this modern production. Does the college-age set even know what the Rat Pack was?” he asked.

You’d want to expect that every Met retread would draw the same curiosity, the same large crowds, to Lincoln Center. While Tuesday’s opening night performance, which was broadcast live, certainly whipped parterre box‘s commenters into a frenzy, such enthusiasm wasn’t exactly mirrored live in person.

Good for the view, bad for profits: those in my ground-floor row were all able to bump a few untenanted seats closer to the aisle. Intermissions felt unusually hushed. And later in the week, another worried operagoer texted me a photo he’d snapped from on high of the rafters, where an unsettling blood-red abyss could be observed, a line of vacant pews whimpering for takers.

This is all doubly unfortunate, because in person, let me say that this was far from the middling display the reviews thus far have indicated. On the ground floor, it was in fact a totally pleasant run-through, featuring a number of singers in roles that seemed ideal and comfortable for them.

Roberto Frontali, a baritone who’d impressed me earlier this season as Amonasro and last year as Sharpless at the Met (opposite a scene-stealing Ermonela Jaho), was maybe a slighter and less overweening Rigoletto than we’re used to. But the voice was steady and warm, and gave Mayer’s reinvention of the character—now a kind of Don Rickles type—some psychological nuance I hadn’t seen in other, more shouty and ribald interpretations.

Especially evident in the second act duet with Gilda, Frontali was a sensitive and precautionary father, the species of sweater-dad who might steer a daughter away from a bad boyfriend and then apologize for overstepping.

I found this take refreshing, a welcome foil that grounded Mayer’s roaring Broadway aesthetic—as well as those playing opposite him.

As the Duke, tenor Vittorio Grigolo leapt into set designer Christine Jones‘ swingin’ neon landscapes with the preening swagger of an extra-Italianate Joey Bishop, brandishing a microphone in one act and winking at fan dancers and Tropicana Girls in another.

Grigolo is not always my thing: he gives enough ham for a hundred Christmases, whether  tossing his paws over his head for a climax or rolling onto his toes for a high note. But you know who else is a total porker?

This week, Grigolo made A-sharp ice cream out of “Mobile” and hit all of the Mantuan’s big marks. When he approached the Countess Ceprano (star-in-the-making Samantha Hankey, one to watch), you got the feeling the Count/Grigolo might actually be more turned on by a rejection because, heyo, change of pace.

This casting of course also gave the plum ingenue part of Gilda some major swagger to contend with. Fortunately, the Met has Nadine Sierra on hand to balance Grigolo out, and in a role that’s essentially become a signature for the star soprano.

I know people love to pile on Sierra lately—feels like it’s somehow become hip to resent her. I, however, tend to think she’s a marvel, truly the best of the best. The coloratura sound was, to my ears, extremely glamorous on opening night, lighting the room with laser top notes that conveyed both drama and girlish wonder.

Nadine Sierra on her back singing “Caro nome” to the ceiling is a golden-age image now burned in my memory. But Sierra is growing older, her trills are sounding increasingly precise and secure, and now she merits other challenges; as a recitalist she still plays it rather safe.

I really hope the company finds a few bel canto curveballs to cast at her in the future, I mean beyond stuffing her into the back of a Chevy.

This production also featured the supporting graces of Robert Pomakov as Montorone (still in a sheikh’s keffiyeh, still the same bizarro choice on the director’s part); Stefan Kocan as seedy barfly assassin Sparafucile (not quite as bizarre); and, as Maddalena for her Met debut, Romanian mezzo Ramona Zaharia, who could have projected a bit more.

Leading the orchestra, Nicola Luisotti turned in what has become his hallmark: a perfectly understated performance that offends nobody and galvanizes no one.

In twelve months I’ve been privileged to attend two vastly different takes on the Verdi masterpiece: the superior one was actually a much smaller company’s more traditional rendition out in Pittsfield, Mass.

But I happen to appreciate Mayer’s lurid Vegas staging. Even if it remains a somewhat “frustrating mix of inventive and half-baked thinking,” the show hasn’t lost its cinematic color. And the elevator fun and jivin’ subtitles (“You’re irresistible, baby,” “Easy now, fella”) are—baby—all still well intact.