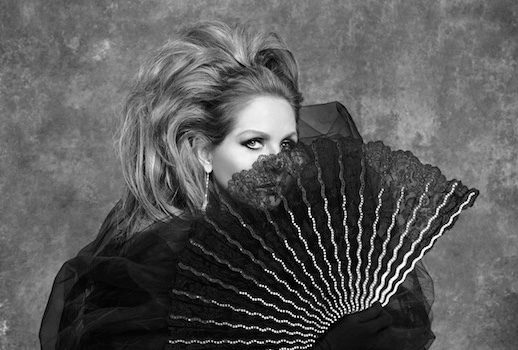 I first heard the now-sexagenarian soprano in 1988, a while before her first appearance at the Met, as a delightful La Folie/Thalie in Rameau’s Platéeat the Brooklyn Academy of Music.

Our next encounter wasn’t until the world premiere of Corigliano’s The Ghosts of Versailles in December 1991 in the same role/different opera as her surprise Met debut the previous season: Countess Almaviva.

In the early years of her career Fleming performed often with OONY, first as June Anderson’s cover for La Sonnambula in 1991. Anderson didn’t appear at the dress rehearsal and there’s a pirate recording of it documenting Fleming’s one and only stab at Amina.

Just a month after the Corigliano, Dame Blanche became her first outing with the group as prima donna, followed the next year by La Straniera and then Salomé opposite Grace Bumbry in 1995’s Hérodiade.

Following Armida, Fleming’s final opera for OONY was a triumphant return to the title role of Lucrezia Borgia in 2000 two years after her disastrous La Scala performances in that work.

Those who only know Fleming’s Armida from her less than happy Met performances of 2010 and 2011 may be surprised at this fiery version (I was there!) done a decade-and-a-half earlier.

The New York concert was a return to the opera that won her early international attention when she rescued the 1993 Pesaro production after Anna Caterina Antonacci dropped out. This Rossini evening was just one of the highlights of the 1995-96 New York season which served notice that Fleming had ascended to the Met’s reigning diva of the moment.

She opened that season as Desdemona in Otello just a few weeks after having a baby and then at the Levine Gala which took place 10 days after Armida she was the de facto headliner featured in three prominent selections including the celebrated Don Giovanni sextet perhaps most memorable however for Kiri Te Kanawa’s surprisingly hot-blooded Donna Elvira.

Less than a month later she was once again communing with Mozart in Frankfurt with the Met as Ilia in Idomeneo, a work she only performed a couple times in concert.

A number of world premieres are on the horizon for the resolutely not retired diva, like Norma Jean Baker of Troy beginning in April with Ben Whishaw at The Shed and The Brightness of Light partnered with Rod Gilfry at Tanglewood in July.

But she first makes a brief welcome return to the repertoire in which I’ve always thought she was at her very best—in March she will perform the final monologue from Richard Strauss’s Capriccio with Andris Nelsons and the Boston Symphony at Carnegie Hall.

As she seems to have bade farewell to 18th and 19th century opera, enjoy these St. Valentine’s Day/Happy Birthday blasts from her distant past, and then return to parterre box’s most ecstatic Fleming-appreciation via Joel Rozen’s famous/infamous October 2017 Renéegasm!

Dame Blanche, Armida and the Idomeneo arias can be downloaded by clicking on the icon of a square with an arrow pointing downward on the audio players above and the resulting mp3 files will appear in your download directory.

Over 200 other podcast tracks are always available free from iTunes, or via any RSS reader.