Looking at the Houston Grand Opera’s 2018/19 season, I think Hurricane Harvey subconsciously must have had an impact on the choice of operas. 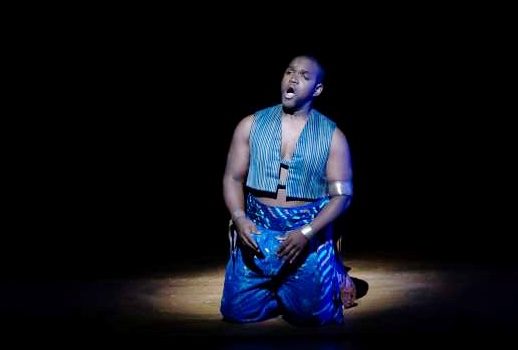 Looking at the Houston Grand Opera’s 2018/19 season, I think Hurricane Harvey subconsciously must have had an impact on the choice of operas.  In the fall we had Der fliegende Holländer and now for the winter season, more pieces with variously aquatic and (literally) turbulent themes.

In winter, the repertoire has taken on a tropical feel, so in a sense we can escape to the opera and forget about the rain and lower temperatures that the start of the year brings to Texas.  Les Pêcheurs de perles (The Pearl Fishers) and Florencia en el Amazonas at the Houston Grand Opera are most definitely worth braving the colder weather.

Both operas are in some sense exotic fantasies: in Les pêcheurs, Sri Lanka is mostly populated by Buddhists, so what’s a Hindu princess doing there, and why is she praying to Buddhist gods?  Also, last time I checked, the Amazon River ran through Brazil, so Portuguese might be a more obvious language choice of Amazon River steamboat passengers than Spanish. But who cares about a few trifling plot points when you’re in tropical paradise?

On the opening night of the Bizet January 25, at the Wortham Theater, the house was not full, but the fact that the Houston Young Professionals (a group of Houston millennial professionals) were in attendance must have brought the average age for the audience down to one of the lowest on record.

Despite the eye candy in the audience, it was a bit of a surprise to find a program insert informing us that hunky Alexander Birch Elliott was taking over the role of Zurga from Polish baritone Mariusz Kwiecien who had withdrawn “due to personal circumstances.”

At any rate, Birch Elliott had sung the role at the Met the previous season, so it was a natural fit on paper, and certainly his physique fit the role and the costume, but when it came to the vocals I was occasionally struck by a certain wooden characteristic to the commanding baritone necessary for the role, and the lack of mellifluence in places. (Here in particular I am thinking about the scene with Zurga and the Priestess, as well as the scene that opens the opera.)  Nevertheless, despite these shortcomings, Birch Elliott certainly did a competent job of stepping into the role at short notice.

For anyone who hasn’t seen this opera rarity, the story centers on a love triangle between Nadir, Zurga and Leila. The tenor role of Nadir, Zurga’s best friend, was played in outstanding fashion by Lawrence Brownlee, whose liquid tones perfectly suited the role.  His aria at the end of the first act, when he realizes that the visiting priestess is Leila perfectly illustrates this point, and he really also dazzled in the famous “friendship” duet with Zurga, which is about the only piece in this opera that audiences seem to recognize.

Andrea Carroll, who played the role of Leila, is definitely a name to watch too, as she nailed this role and had me thinking how someone with such a small frame could produce such an incredible rich soprano sound. And last but certainly not least, the sharply-dressed Roderick Cox, winner of the 2018 George Solti Conducting award, did a great job pulling the subtle melodic lines out of the score, and is definitely another rising star of the classical world to watch.

To balance all the relative newbies, the sets for this run were by veteran UK designer Zandra Rhodes, and they were superb in lighting up the stage and creating the tropical feel of Ceylon/Sri Lanka.  The orange, yellow and blues that almost had a psychedelic feel to them, made the whole set light up in spectacular fashion. 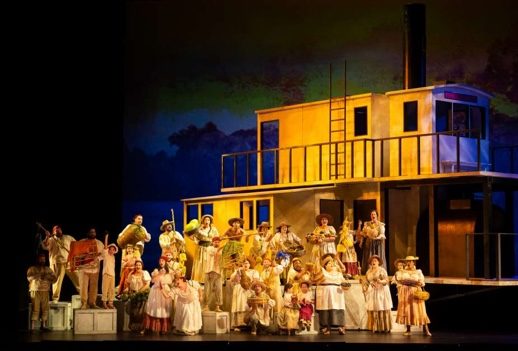 Also the bright and vibrant colors and patterns on the stage screen and back panels somehow didn’t noticeably clash with the more classic feel of the costuming, which was true to location. And as a wonderful surprise to crown a great evening, there was Rhodes on stage in a brilliant pink dress at the curtain call.

Anyone who has been on a cruise knows that being on a boat with a static group of people can lead to drama of its own type, including blowout dynamics and of course new relationships too.  Daniel Catán’s 1996 opera, Florencia en el Amazona is based upon just this kind of situation, a steamship journey up the Amazon sometime in the early 20th century to hear a famous soprano, Florencia Grimaldi (played by Ana Maria Martinez) perform in Manaus.

This isn’t a Fitzcarraldo type of Amazon voyage up the far reaches of the Amazon (the final destination is only Manaus) which means little interaction with any of the indigenous peoples, and no heroic pushing steamboats up and down hills while regaling the jungle’s inhabitants with opera.

The seven main characters on the steamship mix and mingle, with one couple, Paula and Alvaro (played by Nancy Fabiola Herreraand Thomas Glass), having trouble with their relationship, while the singles Arcadio and Rosalba (played by Joshua Guerreroand Alicia Gianni) hesitate to become another couple.

Lastly, diva Florencia cannot seem to come to terms with the apparent loss of the butterfly catcher Cristobal whom she had met and fallen in love with on a previous steamboat passage up the Amazon.  The ship’s captain (David Pittsinger) and the mysterious figure of Riolobo (Norman Garrett)—who at one point transforms into an elegant and stunning butterfly—round out an excellent cast.

The score of the opera is richly melodic and sonorous with echoes of film scores as well as some delightful twists and turns which keeps the listeners on their toes – so definitely no quick snoozes in this opera!  The first act ends with a climactic and highly theatrical storm, and the second act takes a sudden turn into despair.

While the opera is ultimately about relationship reconciliation in the context of journeys, whether in person or not, it does pose some interesting questions about how situation and circumstance can actually foster reconciliation. Surviving a storm prompts the realization of how fleeting life can be, with the Amazon as symbol of nature that gives life but can just as easily take it away.

The set consists of a steamboat front, with a cross section cut-through at the back, and the river itself is represented by semi-naked male dancers, who are almost too distracting in a couple of instances.  The singing quality was excellent, and although Martinez took a little while to warm up, by the second act she was in full throttle, and able to deliver a beautiful and exquisitely phrased conclusion to the opera.

The two other standouts were Garrett, who flawlessly executed a tough narration role, and tenor Guerrero, who really managed to capture the anguish of uncertainty in relationship dynamics and projected a beautiful upper register into the receptive hollows of the Wortham Theater.  The orchestral playing, directed by the experienced hands of conductor Patrick Summers, was really on point and had me rushing to purchase the CD for some repeated listening.