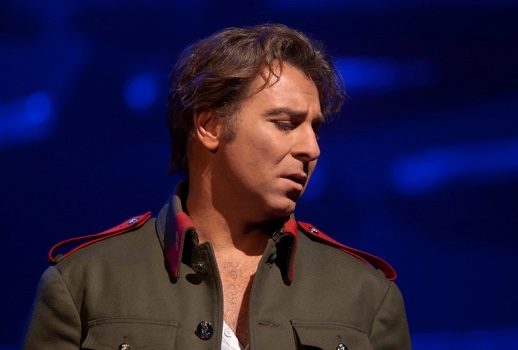 I primarily returned to Sir Richard Eyre’s production of Carmen at the Met to hear Roberto Alagna. After his misfire earlier this season, in Samson et Dalila, I wanted to see how he fared in repertoire with which I’m a bit more familiar. And indeed, his over-the-hill Don José was worth a revisit to the ubiquitous opera.

While at first, the tenor seemed miscast (despite that floppy hair, he no longer reads as youthful or naïve) his physical bearing and comfortably worn voice gave the character an edge of pathos. Instead of a petulant child pickling into toxic masculinity, his Act IV José was an old man—desperate, outcast, humiliated, used. Like a broken, Mediterranean Willy Loman.

While age doesn’t make José any less of a villain in my book, Alagna’s physical and vocal embodiment of the character lent his particular narrative a complication I hadn’t anticipated. His beautiful singing elicited sympathy. Instead of being merely dangerous, he was also pathetic; and yes, I’ll say it again, if begrudgingly: I found myself feeling sorry for him.

That’s a feeling I’m just not comfortable with.

But doesn’t Carmen, of all the operas in the canon, lend itself to discomfort? Its scorching flashes of sexual desire; its tediousness; the capricious I-love-you-I-hate-you motif; race; destiny; violence; delinquency; bulls; swords, blood; and Micaëla, that siren of bourgeois respectability. These odd themes and symbols add up to something disquieting, ambivalent, and elegantly difficult: infinite analysis and ageless relevance.

I struggle to enjoy Carmen. I find it even more difficult to dismiss it.

If Sir Richard Eyre’s production felt awkward and static, I believe a malfunctioned turntable was to blame. But even so, his vision for the opera was a bit too on-the-nose for my taste. The main intervention was a leap forward in time, but not place. Other than that, it was a run-of-the-mill Carmen—flamenco dancing and insipid caricatures of Romani people.

There were some twistedly kinky, grotesque moments to unpack. But just when they started to become noteworthy, things veered demurely toward cliché. For example, Act II featured Don José leading Carmen around the stage on a leash; she panted and purred, practically rubbing herself against strangers’ legs to secure freedom.

The sexually racialized female body is hardly inventive, accurate, or politically responsible. But issues like this are embedded in the text. And so, I argue on behalf of their exposure, their need for wrestling—a little intellectual rigor from the director and designers. Go further; try harder.

Carmen’s use of sexuality—her motivations, her cold calculation of resources—is left relatively unexplored in Eyre’s version of things: a rudimentary, cursory gloss. Whatever it is that makes the opera so uncomfortable, so difficult to forget or forgive, is imagined away here, soothed and ignored to a facile level.

Whatever heat could be conjured came from the performers. And Alagna’s performance was not the only one to blister. Something should be said of Clémentine Margaine’s robust Carmen, which has deepened and dilated over time. She certainly didn’t avoid the more trite tropes attending the character—legs thrust open, a swagger—but her voice has grown larger, rounder, and suppler (I would love to hear her Amneris and Dalila).

And it is not difficult to see why she appears so frequently at the Met in this particular role; she is as beautiful as she sounds, her looks perfectly suited for the Spanish-Romani character. (She reminded me so much of the actress Asia Argento—especially her performance as the tempestuous Spanish mistress in Catherine Breillat’s Une vielle maîresse.)

Alexander Vinogradov’s Escamillo contrasted nicely with Alagna’s José. Physically he is slighter, but vocally sturdier—his bass not only boomed, but bloomed.

But Aleksandra Kurzak, as Micaëla, was a disappointment. While she began with a focused, clear sound in Acts I and II, her voice disintegrated in Act III. Her singing of “Je dis…” was shallow, unpleasant, and insufficient.

And I found Louis Langrée’s conducting pretty boring. He didn’t make much of Bizet’s lush score, its sexy insouciance. Despite such excellent vocalism on stage, there was an interminable quality to the evening that seemed to fall within the orchestra’s jurisdiction. It was only during the Act II tavern scene that it actually felt like they were cooking with gas.

Margaine and Alagna will appear throughout the opera’s run this season. For them alone, I would recommend a revisit. If Eyre’s production feels like nothing more than empty garnish, then these highly competent performances should provide enough meat and potatoes to chew on.