Alban Berg’s compact yet potent oeuvre has long played an outsized role in shaping my understanding of music’s aesthetic evolution. 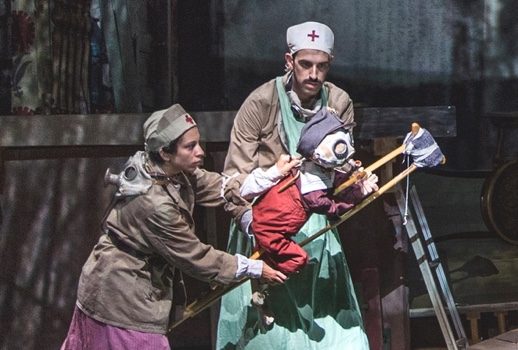 In the fall of 2015, I ended a seven-year hiatus from live opera with two of Alban Berg’s staged works. Both were new productions—the first being William Kentridge’s palimpsestic abstraction of a Lulu at the Met, and a week later, David McVicar’s stark, Weimar Republic inspired Wozzeck at the Lyric Opera of Chicago.

Musically, most artists in those productions rose above the composer’s difficult idiom to realize the harrowing social parables of Berg’s operas. From a creative standpoint, the directors’ innovative readings also challenged me to ponder about the artistry of developing theatrical concepts for the composer’s carefully constructed musicodramatic language.

That November really couldn’t have been a better time for a staunch lover of Berg’s music.

Berg’s compact yet potent oeuvre has long played an outsized role in shaping my understanding of music’s aesthetic evolution. Although he composed relatively little, the totality of his output reveals a meticulous painter of sound who devoted his gifts to a broad expanse of stylistic forms, mediums, and instrumental architectures that could be contained within a score.

Such musical innovations, when paired with the composer’s sensuous, Tristanesque aural backdrop, have the greatest capacity to seduce the senses, as exemplified by the great operas that continue to uphold his legacy.

Wozzeck and Lulu, which represent the pinnacle of the composer’s imaginative prowess, fascinate not only for their overwhelming modes of expression, but also for the intelligently crafted musical structures that Berg designed into their composition (e.g. the symphonic architecture of Wozzeck’s second act).

By this, I am not implying that one ought to tune a production to a Sonata form or a Rondo. Rather, in works where the drama’s extraordinary power is interlocked with such formal and rigorous musical structures, it becomes increasingly important for a director to unify their theatrical vocabulary with the score’s structural progression for maximal impact.

Berg may have written that it isn’t necessary for his audiences to understand and identify his musical formalities. However, I would argue that the most cathartic moments in great productions of Lulu and Wozzeck, be they conservative stagings or more spatially clever productions, always seem to draw parallels with the evolution of the music.

I’d like to bring my discussion now to one of the Berg productions that largely worked for me in channeling the music’s insights. William Kentridge’s visually mutable Lulu, noted for its projections of inky, expressionist sketches, proved powerful in its imagery’s subliminal communication of the score’s unstable and constantly shifting musical transitions and the mystique behind the antiheroine’s persona.

It’s not a production that works for everyone—the first act was made unnecessarily busy by the constant barrage of drawings, and when combined with the mimes can detract one’s focus from the character development. The organic flow of the characters interactions’ can also at times feel stilted when replaced by intentionally blocky and abstract physical movements.

But this is one of those productions that benefits greatly from repeated viewings and a familiarity with the opera. If Kentridge’s vision doesn’t quite represent what I regard as an ideal Lulu (what I would give to see the staging that was never directed by Herbert Wernicke, a master of specular visuals and musically insightful direction), it still is immensely rewarding for offering a visual representation attuned to Berg’s subtle orchestral gradations.

Kentridge’s Wozzeck, premiered in Salzburg during the summer of 2017, will visit the Met during the following season, reportedly with Peter Mattei in the title role. For those curious to see Kentridge’s treatment of the opera beforehand, a video of the festival production was filmed and is available from Harmonia Mundi.

Much like his Lulu, Kentridge’s take on Wozzeck weds projected imagery with a fragmented and expressionistic set, although here, the director’s interplay between visuals and stage direction is tighter and more elegantly executed.

To further underscore the production’s brutality, the supernumeraries and chorus members roaming the set are portrayed as physically broken victims of war. Nowhere are these effects more chilling than in Act 2’s tavern scene, where the crowd appeared to engage in a grotesquely choreographed dance of death during the Ländler.

Despite the abstract quality of the production’s optics, this is a theatrically straightforward and impactful Wozzeck, artfully balancing musically inspired character direction with a shifting image deck that draws us into our antihero’s broken mind.

Visually, the production appeals without overwhelming the senses, and the set’s aesthetic (stage design by Sabine Theunissen and costumes by Greta Goiris) has a Max Beckmann feel to it.

The thesis of this production, centered on the social oppression wrought by our species’ predilection for violence and militarization, extends to Kentridge’s thoughtful direction of his cast. Wozzeck, here played by Matthias Goerne, does not begin the opera disturbed, but rather progresses towards his devastating end as he is tormented and abused by his superiors and even Marie.

Goerne wields his gritty lyric baritone with a Lieder artist’s palette, projecting the character’s descent with dark and haunting colors and phrasing. If Goerne doesn’t possess the most impressive baritone for the part, his mastery of the role’s interpretive possibilities mesmerizes the listener and dominates the production.

Asmik Grigorian, who blazed through Salzburg’s new production of Salome last summer, is simply riveting as Marie. The youthful gleam and rich textures of her soprano create a vastly different impression of a character normally portrayed by mature artists.

As a result, her searing reading of the Bible in Act 3 gains greater potency as an act of penance, her death bleaker because she knowingly created the monster at the opera’s end.

Apart from these strong leads, this production’s supporting characters are carried by singing actors of exceptional dramatic acumen. As Wozzeck’s shoulder devils, Gerhard Siegel and Jens Larsen play the Captain and the Doctor as sadistic and humorous antipodes of the other.

John Daszak’s sinewy vocal production generates little sympathy for his Tambourmajor, but I suppose that hits the mark for this boorish character. Special mention ought to go to Mauro Peter, who as Andres displayed a wonderful voice that straddles the boundaries between a lush Mozartean lyric and a young heldentenor (e.g. the kind of instrument that would fit Das Lied von der Erde’s odd songs like a glove).

Vladimir Jurowski leads the virtuosic Vienna Philharmonic orchestra in a skillfully modulated reading that builds the drama towards its gripping denouement. Under his baton, Berg’s remarkable instrumental voicing and structural logic emerge as integral elements of the narrative, here enhancing rather than sacrificing the work’s theatrical pulse.

And in the third act, arguably one of Berg’s greatest musical constructions, Jurowski coaxes his Viennese forces into delivering that climactic D-Minor interlude like a Mahlerian dirge of extraordinary power.

Wozzeck, with its grim plot and atonal orchestration, is by no means an easy opera. But for all its musical rigors, I also find it an incredibly accessible and moving work of theater. With my review, I hope I’ve convinced you to examine Kentridge’s powerful vision of the work, and to consider attending one of the shows when the production visits the Met next season.

What Kentridge’s creative team achieved with this Wozzeck is no less than serious art, innovative theater, and powerful social commentary merged into one. At the end of this vision, when all that remains on the barely lit stage is Marie’s gas-mask clad puppet of a son, one hopes that the audience leaves the auditorium dazed, reflecting on the still resonant messages of Berg’s parable on social oppression.

Postscript: Preparing for Berg’s music by listening to recordings, watching the opera on video, or even studying the work with a score brings out so many more riches when experiencing his operas live. I suggest the following materials for your viewing/listening pleasure:

The totality of Barenboim’s audio recording works spectacularly for me. I love the Mahlerian sweep he applies to Wozzeck’s orchestration, and the intensely dramatic performances he gets out of Franz Grundheber and Waltraud Meier are outstanding. Great supporting cast in Graham Clark, Mark Baker, and the late Endrik Wottrich.

The Abbado is a great place to steep oneself in the complexities of the orchestration due to the recordings’ placement, but I find the Barenboim set’s singers more organic and powerful both musically and theatrically.

As a newer alternative, Hans Graf’s Houston Symphony recording (which won the Grammy Award for opera in 2018) offers a layered, well paced and nuanced dramatic reading of Berg that impresses on many counts, even if it doesn’t quite approach the thunder Barenboim commands from his reading. Graf’s new recording is especially recommendable for the amazing Marie of Anne Schwanewilms, easily one of my favorite readings of the part.

This Salzburg production has many things going for it.

If the Chereau is affordable used, I’d seek that out but there don’t appear to be many copies floating around the marketplace.