“Non mi dispiace” seemed to be the general consensus in the loggione December 7 when Verdi’s Attila came roaring into La Scala to open the 2018-19 season. 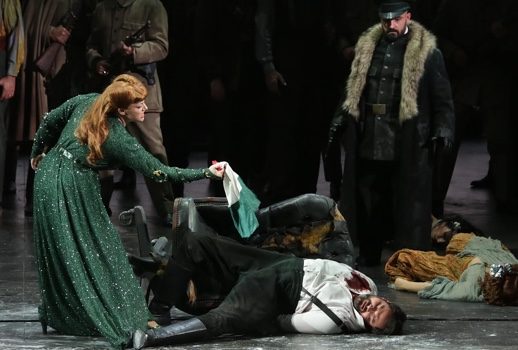 “Non mi dispiace” seemed to be the general consensus in the loggione December 7 when Verdi’s Attila came roaring into La Scala to open the 2018-19 season.

But this oft-repeated tale of the Hun’s unsuccessful conquest of Italy, a weirdly neutral blend of patriotism and bellicose romantic politics, was called into legitimate relevance when the audience greeted President Sergio Mattarella with a four-minute standing ovation before the lights had even been dimmed.

Mattarella, in a mostly ceremonial role, has earned he affection and admiration of Italy’s liberal elite that coalesced once again for the traditional St. Ambrose festivities.

Indeed, if “non mi dispiace” was the synthesis of the evening, “resti l’Italia a me” was the rallying cry.

Davide Livermore’s neorealistically busy production, gently updating the story to a postwar Italy and peppering the staging with visual references to both Renaissance artworks of conquest and the celebrated films of or about the era (Attila’s transmigratorily hedonistic court was branded with Visconti’s La caduta degli dei, for example), was innocuous without being uninteresting.

If anything, the iconic ruins in the background (evocative, era-bending sets by Giò Forma) emphasized that many times since the days of the huns has Rome been a città apertaand Attila’s exploitative power grab, if without a historical equivalent, seemed plausible enough.

But it was up to Ildar Abdrazakov to bring it to life and admirably so he did. Though his underwhelmingly indistinct bass can only muster up a tangy growl instead of an authoritative roar, he acted the part with laser-focused commitment and his singing followed suit.

From his assured first-act arrival on horseback, his reading of Verdi’s weakly-sketched Hun was crisp, incisive, and vividly emotional.

Saioa Hernandez, in her Scala debut, answered back with moxie as his chosen consort, the rebellious Odabella. Though she wasn’t the memorably savage feminist that Maria Jose-Siri delivered in Parma this September, her more anguished, quietly passionate Odabella founded herself in Hernandez’s even, bronzed sound.

Capitalizing on a significant register break, she carved the distinct parts of her sound into seemingly different personalities. While high notes were hurled out securely with a clenched fist, her midrange notes poured out with pained introspection. And she even threw in some tasteful ornaments in both her arias. The loggione seemed pleased.

Nobody pleased the loggione more, though, than Fabio Sartori as Odabella’s impotently restless lover Foresto. Contrary to Hernandez, though, Sartori has an unbelievable timbral evenness, maintaining a woody, squillo-free sound from top to bottom.

His singing may be rough-around-the-edges, but he keeps up an admirable line with a voice of understated uniqueness in its capabilities.

George Petean’s taut baritone afforded the Roman general Ezio’s music long, generous lines, as he supplicated to Attila to spare Rome and Gianluca Buratto made a memorable impression as a horsebound Pope Leo I, throwing out his lines with a stinging bass.

La Scala Music Director Riccardo Chailly has said that Attila forms the second part of a trilogy of young Verdi operas he wants to raise in profile at La Scala (the first being Giovanna D’Arco and the final being Macbeth).

Attacking the score without pretense or bombast but with a vivid, mutable sense of atmosphere, the La Scala Orchestra simply sings with undulating, detailed cohesion under his baton. The chorus responded the same way, especially the men who sang with both rich sound and crystalline diction.

La Scala’s 2018-19 season is admirably outward-looking. With new productions of Khovanschina, Die Tote Stadt, Die Ägyptische Helena, and the first outing of the Balanchine Nutcracker in Italy sharing space with Manon Lescaut, I Masnadieri, and Elisir, the opera house seems to be clearly articulating its globalist orientation in an increasingly fractured Italy.

But this very worthy Attila felt representative of the Italy Verdi himself wanted; one that prioritizes unity over exclusion, the rich lessons of the past over the uncertainty of the future. The audience, in their lengthy applause of both Sergio Mattarella and the performance, seemed to agree.