The singularity of Stephen Sondheim contributes to the conception of him as a camp figure. 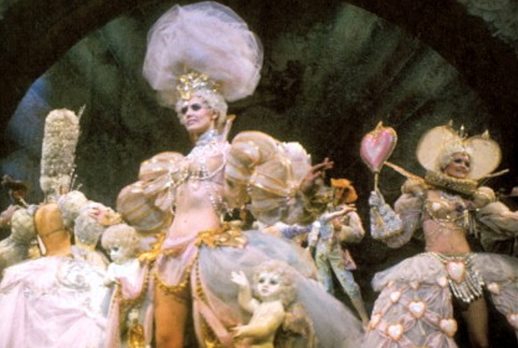 Though composer and lyricist Stephen Sondheim’s works are famous for their structural and modular diversity, a closer look at their elements of cultural criticism embedded in each work give insight into philosophical and structural undercurrents that stay consistent through his career, chiefly camp and postmodernism.

To understand Sondheim’s cultural philosophy is to reconcile the moments of anti-serious camp sensibility that pepper his work within his general postmodernist philosophy in storyline and structuring.

However, the ambitious structural and genre experiments that have characterized Sondheim’s career can cast a shadow of ambiguity as to who Sondheim the artist is; a camp figure or a postmodern prophet?

Examining how Sondheim manifests on both ends of the spectrum, as what can be perceived as “camping” with Follies in 1971 and issuing a postmodernist (if not warmly affectionate) manifesto with Sunday in the Park with George is 1984, demonstrates the best way to orient oneself with a composer whose work is so varied and multifaceted.

In her seminal 1964 “Notes on Camp,” essayist Susan Sontag lays out a comprehensive list of criteria she thinks constitute the Camp aesthetic. The chief amongst these is that camp involves a “dethroning” of seriousness in favor of praising the artificiality of whatever element it was that made the item being discussed seriousness.

To look at something with the camp eye, to camp, is to consider it as being performative of its function and poke fun at it; “Being-as-Playing-a-Role.” On a superficial level, camp is highlighting and delighting in the slightest exaggeration of existence.

On a deeper level, it’s a playful condemnation of any perceived excess or artificiality in society. But viewing and conceptualizing camp is easier to do when the subject enjoys a degree of removal from the object being camped by way of time or deterioration.

In this sense, it makes sense that camping is a defensive method of cultural criticism, one that grew out of an economically privileged but socially marginalized social subset – homosexuals and Jews, the two groups that Sontag argues have been instrumental in shaping the aesthetic sensibilities of the 20th century.

Because camp functioned so long in association with “passing,” providing a means for gay men to engage with mainstream culture – often swimming against the current, as it were, but subtly enough that their ripples would be noticed only by insiders – any claims it may have to authenticity are fundamentally undermined.

The camp sensibility, therefore, has a privileged place in the gay subconscious as a way of viewing a world that largely negated the viewer’s existence.

As both a Jew and a gay man (and one who spent much of his life in the closet), Sondheim should be an eager prophet for the camp sensibility, especially considering his primary medium, that of musical theatre, which is exclusively performative and includes many camp elements (artificiality, Being-as-Playing-A-Role, depiction of deterioration or age, removal from the action via the proscenium, etc.).

The singularity of Sondheim also contributes to the conception of him as a camp figure. (Sontag: “What the Camp eye appreciates is the unity, the force of the person.”)

The Sondheim sensibility, though it may not be entirely the Camp sensibility, pervades his work – though he may dabble in different sounds or structures, much of Sondheim’s oeuvre is distinctly and recognizably his. And Sondheim’s career ambition is as recognizable as his creative output.

Gaudí’s lurid and beautiful buildings in Barcelona are Camp not only because of their style but because they reveal – most notably in the Cathedral of the Sagrada Familia – the ambition on the part of one man to do what it takes a generation, a whole culture to accomplish.

Similarly to Gaudí, Sondheim attempts to depict the work of a generation, of an entire culture. Sondheim’s genre experiments are a testament to this, each one a modular attempt to analyze human relationships using different conventions.

Using the conventions of theatrical modes like Kabuki, operetta, and vaudeville, amongst others, Sondheim provides top-down diagnostics of society and the humans that make it up. Though the insights he yields each time may seem different, his novel and manifold ways of doing it encapsulate so many performance traditions that to look at the Sondheim oeuvre is almost like looking at a miniature history of world theatre or at least the various uniquely American performance traditions.

But of all of Sondheim’s works that seem most prone to camp, Follies (1973) seems his strongest invitation to it. The creative team for Follies (Sondheim, Hal Prince, James Goldman, and Michael Bennett) was inspired by a 1969 photograph taken of actress Gloria Swanson, done up in an evening gown and jewels, standing amidst the rubble of the demolished Roxy theatre.

The photo is a powerful statement about nostalgia and a communion of the past and the present (themes the musical dwells on), but it also pushes the camp-identifying buttons of people that understand the context of the photo better (or are familiar with the accompanying photo of Swanson being carried by the photographer to the rubble pile). 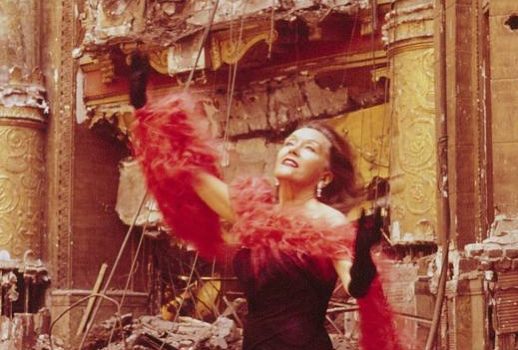 La Swanson, out of context.

The story is that of a reunion of showgirls on the eve of the demolition of the theatre they all once performed in during the Interwar years. In Follies, Sondheim wrote both book songs, ones about the characters that advance the plot, as well as pastiche songs, songs the Follies girls would have performed.

As the evening traces the stories of the derelict marriages of two couples, Buddy and Sally Plummer and Ben and Phyllis Stone, Sondheim reveals brutal truths about aging, failures of the American dream, and the poisonous nature of indiscriminate nostalgia.

Between its nostalgic vibe and the casting of several notable aged actresses in its original and subsequent productions, Follies seems prime territory for camp in both its aesthetic and the way it communicates its message. However, though Follies may be about frivolity, and requires frivolity in its presentation, it isn’t frivolous because its conclusion and message are so tragic and such a rejection of that frivolity.

In being considered as camp, Follies is greater than the sum of its campy parts and for one to look at the show with such a discriminatory aesthetic eye as the “camper” must do is to miss its broader message. 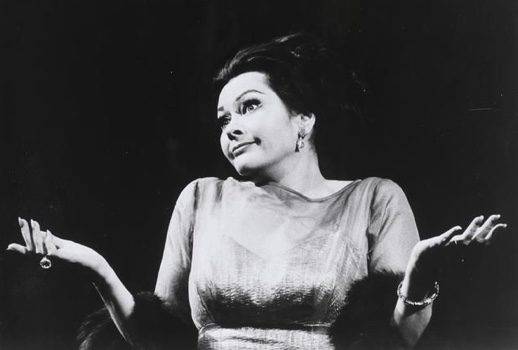 The character Carlotta Campion, one of the showgirls who once enjoyed a high-profile show business career though might now be called a “has-been,” frames this best with her song “I’m Still Here,” one of Sondheim’s most excerpted numbers. A list song of pop culture references from the 1920s to the 1950’s, “I’m Still Here” is at once a nostalgic romp through the interwar years and a powerful statement about survival on the part of one character.

As Carlotta enumerates events and characters, like The Great Depression, the Red Scare and Brenda Frazier, she interweaves her own struggles, each one underlining her stick-to-itiveness.

Suffice it to say that “I’m Still Here” holds a great deal of subtext and though it has a surface camp value of an older woman reflecting on a career through a (perhaps) diegetic song, it also has plenty of additional significance that can be furnished by the interpreter’s personal experience or interpretative ability.

However, it’s these interpretations that walk the line between camp and something more meaningful and the cultural prevalence of the various performances reinforce a cultural perception of Sondheim, and ofFolliesin particular, as camp.

One performance that falls into this camp stereotype is Christine Baranski’s barely-sung, breathy rendition of the song from the City Center Encores! presentation of Folliesin 2005. The drink in one hand, the primping and gesticulating with the other, and the blown out hair and heavy eye makeup only reinforce this.

Baranski lies significantly out of the age range for most of the actresses who play Carlotta, and the sardonic gloss (and phony Transatlantic accent) she maintains throughout her performance gives little dimension to the character.

Potentially in order to compensate for a lack of pathos that would have been afforded by a longer or more challenging career or personal life, her twitchy and overly blowsy performance falls into campiness, though it can stand on its own outside the context of the larger musical.

On the other end, Carol Burnett’s performance from the 1985 New York Philharmonic Folliesconcert is a much understated and therefore more human one. Burnett’s background as a comedienne tee the audience up to find the humor in this first monologue and indeed it’s almost delivered with a standup cadence.

However, she then sings the song in such a controlled way, building in volume with the orchestra at the context and varying her tone throughout the song, reflecting the fragility and candor the song prescribes. And though the number has the potential to tend towards a dirge, Burnett brightens her tone at certain points (“Black sable one day…”) and turns the song into a powerful exultation of struggle surmounted.

Especially when viewed in light of Burnett’s varied career, it’s an authentic, candid ballad that defies the artificiality camp loves to wallow in. And the enthusiastic audience response at the end of the song confirms that.