At the opening of the Scottish Opera’s 2017 production of Turnage’s opera Greek, I was very sorry I’d missed Anna Nicole. 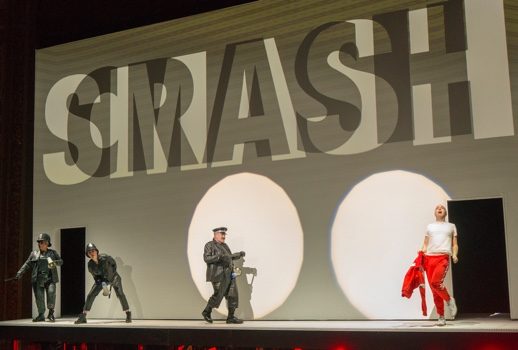 To put the matter succinctly: I missed Mark-Anthony Turnage’s Anna Nicole when New York City Opera presented it at BAM five years ago. Wednesday night, at the opening of the Scottish Opera’s 2017 production of Turnage’s previous opera, Greek, at the same place, I was very sorry I’d missed Anna Nicole. And I am thinking of returning to Greek.

Because this Turnage guy has got something to say, know what I mean? Something that entertains, about the myths, the traditionsthe politics of his era (which is still ours), something to tell in story and song on an operatic pattern if not exactly in what we think of as operatic style—Greekis too vastly, iconoclastically, hilariously, obscenely avant-garde for that.

And Turnage’s use of operatic methods and effects is proper to the tale he wishes to set before us, in a way that is not true of a great many modern operas, which seem to call themselves operas (near as I can figure) solely because there’s music playing and some of it is sung.

In Greek,the score combines illustrative tuneful phrases with harsh intrusions, bluesy brass cries, police whistles and percussion eruptions. Greek sounds like jazz heard two rooms away in a smoky boite, with all the clinking of glasses and hysterical conversation in half-caught phrases and screeches filling up the intervening space.

Greek is a tale told by a drunk who has caught the arm of the person beside you, doesn’t care how much you hear or understand of it, but has to go on clinging to the end, by which time (and round of drink) it begins to make sense to you.

The virtuoso slang of the orchestral players led by Stuart Stratford echoes, compliments, derides the traditional orchestra that might have been having a ripsnorting good time with the show.

Greek is based on the play of the same name by Steven Berkoff, which I saw years ago in a tiny Seattle theater. It is a violent flood of verbal fireworks (flood of fireworks? Why, yes) in low London slang that tells the story of Eddy, perhaps familiar to you (in operas of Stravinsky, Enesco, Leoncavallo and Pacini), a young man who flees home because a carny has predicted that he will kill his father and “bunk up” with his mother.

They’ve never told him he’s adopted, but he’s fed up with them anyway. Across slummy London, he gets in a fight with the owner of a fish n’ chips shop, then resolves to console the dead man’s attractive widow, though she is somewhat older than he and never reconciled to the disappearance of her only child in a steamship explosion…. 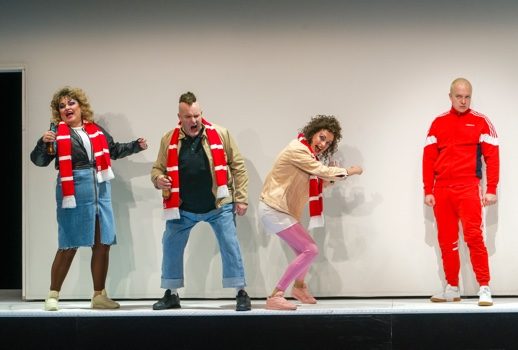 Years ago, in a tiny black-box theater in Seattle, I attended the play, fodder for a brilliant local actor spouting Eddy’s great endless colorful speeches. The operatic version was commissioned from Turnage back in 1988 by none other than Hans Werner Henze.

Playwright Berkoff gladly helped with the libretto, and both he and Turnage knew that, with an opera, you can tell more than one story at the same time, quite clearly, by having more than one character sing.

The opera would not work without four spectacular singing actors, adept at phrasing and slapstick in turn, and the Scots Opera, I’m sure, would not have attempted it without just such a cast. Greek uses four singers, who (aside from Eddy) perform many roles.

It requires skillful operatic voices who must also croak and bellow and whine and change accents, as the story wends its way through a lot of story, some of it mythic, some of it contemporary, savage and satiric.

The performers have to dance, to act, to sneer, to faint, to change costume quickly, to dash off stage to juggle effects that are projected on the great white wall of the set. Sophocles had messengers to report this or that offstage or long-ago event.

In Greek, these events are often seen first-hand.

Thus Eddy confronts the riddling Sphinx (two ladies, each in half a mask and singing mostly at once or in jagged harmony); we see him mocked by haughties in a wine bar; we see him beaten to a pulp by coppers; we see him commit murder and mayhem and success.

We see him resolve to tear out his eyes after his terrible sins, and then he cries “Bollocks to that!” and decides his crimes weren’t so bad. He’s a cocky chap, our Eddy; bouncing about from foot to foot like a boxer dodging the piledriver of fate, singing gutter slang in a breezy manner, spouting poetry, sneering like every limey in the East End. 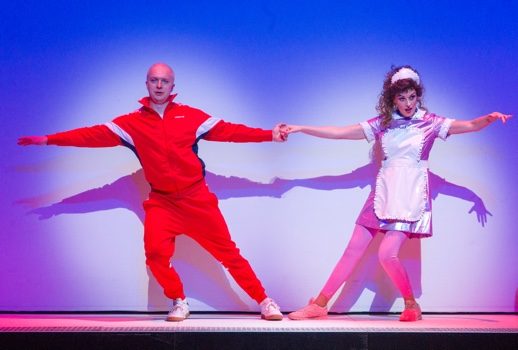 Alex Otteburn, whose light baritone swims so high so easily I could have sworn he was a tenor,is fantastic in the part. He has sung Offenbach’s Pluto, Strauss’s Harlekin and Bernstein’s Chip, thus falling into a musical theater side of opera, but where he has a line to display, the voice is distinctive and lovely.

The part is written all over the place, but Cook inhabits it in a theater-filling style, Sprechstimme howl and arching phrase, the voice used as a sensual dramatic touchstone.

Susan Bullock, whose dramatic soprano is familiar as Elektra and Brünnhilde, portrays waitresses and prim Joe Orton-ish mums with drab flare, but she reminds us who she really in the great scene of the Riddle of the Sphinx.

Andrew Shore sings Alberich, Beckmesser and Falstaff, among many other character, humorous and villainous roles, all of which provide context for the ribbing and the drubbing he must endure or dish out or inhabit as Eddy’s two fathers, a role that obliges him to become other characters he is merely describing, while describing them.

Johannes Schütz’s set is a white wall with two doors on it. The wall pivots on its central point, and the doors go around the characters as often as they race through the doors to change costume (Alex Lowde did the costumes) on the narrow platform backstage.

As it circles about, we follow Eddy strolling from one London borough to another, and the high blank white space is ideal for Dick Straker’s projections.

This is opera that keeps up with the most shocking and immediate events of the form without forgetting that the story and the voice are unevenly hitched to the ox-cart of the drama.