The proceedings took the virtue of longevity too much to heart; the night stretched on interminably. 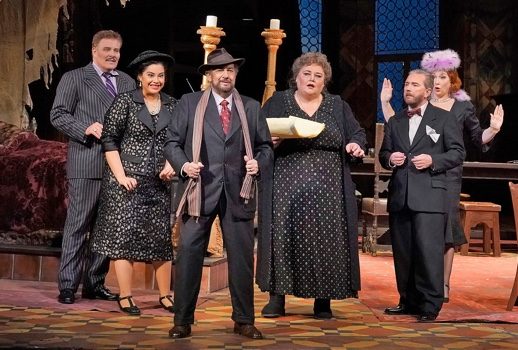 With a performance of Il Trittico that showed every instant of its age, the Met celebrated both the centennial of the opera’s premiere at the house and Plácido Domingo’s 50th season with the company. Perhaps in the spirit of the latter honoree, the proceedings took the virtue of longevity too much to heart; the night stretched on interminably.

To start with, Il Tabarro failed to find its groove. The smoldering, menacing Michele of George Gagnidze overwhelmed Amber Wagner and Marcelo Álvarez as the illicit lovers. But, it wasn’t for want of effort.

Wagner, especially, seemed to give her best—vocally secure; a dowdy, sympathetic Giorgetta—but still, the disparate aspects of her performance did not coalesce into anything organic, seamless, or passionate. In contrast, Álvarez’s Luigi was feverish, but imprecise. He lacked grace. His singing had a shallow quality; it was stripped of cultivation and beauty.

Jack O’Brien’s lush production for the opera reminded one of the burning of Atlanta in Gone with the Wind. There were warm, glowing embers diminishing against a crepuscular sky; a Technicolor Seine, artificial and stiff; gas lamps lining the streets of Paris.

Afterward, before the intermission, the company celebrated Domingo’s august career with a short video documenting his artistic accomplishments at the house. Then, General Manager Peter Gelb presented Domingo with two gifts: a piece of the Met stage and a costume jacket worn by the tenor, dipped in gold to celebrate his Golden Anniversary (very “Krystle Carrington”).

Gelb also singled out four of Domingo’s colleagues in the audience. They each stood to receive polite applause: sitting in the orchestra were James Morris, Sherrill Milnes and Teresa Stratas. Martina Arroyo waved graciously from her seat in the (say it with me!) parterre box. 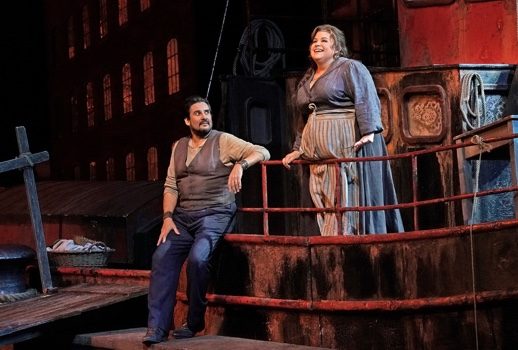 After this fanfare, events took a depressing turn. Kristine Opolais chirped her way through Suor Angelica, managing some brief passages of beauty. But when the soprano was required to sing with passionate gusto, she squawked—high, shrill, unpleasant.

Opolais sings like a fool. No, I’m not a voice teacher. But my diagnosis (take it for what it’s worth) is that the soprano seems to possess a lovely instrument, but yet has no idea what to do with it.

Her technical ineptitude contrasted bluntly with Stephanie Blythe’s seething Princess. Vocally, Blythe is a wide lava flow of sound. But where she deserves credit is in her ability to bring depth and dignity to material that could easily shift into haughty camping. Her Princess was not so much a perversely cruel puritan, but a woman bound by rigid custom. I found this approach refreshing.

The production was clunky, with odd flubs in lighting that felt like technical difficulties. And the static direction was devoid of imagination and creativity. Nuns wandered the stage in unexplained clumps. Nothing was made of the mystical feminine energy latent within the homosocial sphere of the convent. Nor was there any reading of Angelica’s witchy preoccupation with medicinal herbs and flowers. (Indeed, with a bit of sly editing, a convent can become a coven!) 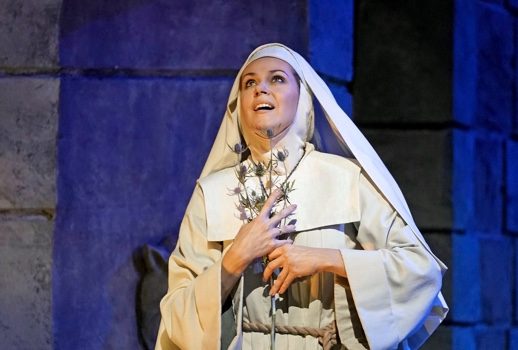 Finally, after a second languorous intermission, the evening ground to a close with Gianni Schicchi. The final opera in the triptych was meant to showcase the storied Domingo. He was… fine: charismatic, adept, and confident. But as is true with all of Domingo’s recent performances, he’s a tenor in baritone drag; a perfect storm for disappointment.

Kristina Mkhitaryan made a lovely Met debut as Lauretta. Vocally ebullient, from my seat in the orchestra she reminded me of a plainer, more approachable Monica Vitti. She was a perfect fit for O’Brien’s production, with costumes and set eschewing Dante’s Middle Ages in favor of post-war excess. Rooted in sumptuous materialism, the whole exercise felt like a cross between Buñuel and Guadagnino—very haut-bourgeois.

The rest of the cast chewed (and stole) as much scenery as possible. Blythe, having cast off the gloomy mantle of the Princess, delivered a zesty Zita. Atalla Ayan also shined as a lusty Rinuccio: sweet, in tune, and vibrantly youthful.

However, by the time the curtain came down on the third opera, my attention had wandered. It was after midnight, and having been at the house for four-and-a-half hours, I was ready to be done. All things have a shelf life, even Domingo’s career. And while I understand the obligatory fanfare over the singer’s golden anniversary, it made the night swell, distended and laborious.

This may be in part due to Bertrand de Billy’s lethargic conducting—or just that three one-act operas make for a long evening, no matter what anniversaries are marked and celebrated. Hopefully, the later performances this season, sans Domingo’s trips down memory lane, will be tighter, sweeter, punchier.