Dancer in the dark

Patrice Chéreau's Elektra brims with ideas beyond its eschewing of the opera’s standard, hysterical trappings. 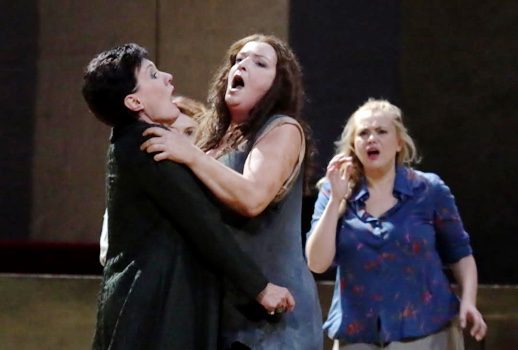 One of the highlights of my college experience thus far was trying my hand at stage directing for the first time with Hugo von Hofmannstahl’s Electra in February. As I worked through the busy, evocative script with a group of talented young actors, I remember being continuously struck by just how much Hofmannsthal gave us to work with.

The deeper we dug, the richer the text got. I had selected Electra because the opera I knew it gave way to is a dramatic thrill ride (one of my absolute favorites) with vibrant characters utterly unlike the ones you’d normally find on a university stage. I still got even more than I bargained for.

In his valedictory production of Richard Strauss’s adaptation of the play, Patrice Chéreau encountered that same bottomless inspiration. His Elektra, which has made the rounds internationally, brims with ideas beyond its eschewing of the opera’s standard, hysterical trappings.

On my fourth viewing of it (twice in its original New York outing with Nina Stemme and once in March with Christine Goerke), the production, diligently re-staged by Peter McClintock, still reaches across the proscenium arch, dares to make Strauss’s off-the-wall expressionist score diegetic noise, and pushes its iconic, subverted characters ever closer to the audience.

It continues to be a staging that disappoints those who prefer their pancake makeup with a side of geschrei, but as this inspired but rigid envisioning of the fall of the house of Atreus enters the international circuit in revival and gradually sheds its iconic creators (Evelyn Herlitzius/Stemme, Adrianne Pieczonka, and, maybe most importantly, Esa-Pekka Salonen), it has proven itself surprisingly versatile to a host of daughters of Agamemnon.

La Scala, in its first revival of the production, entrusted hosting duties to the idiomatic German soprano Ricarda Merbeth, a Chrysothemis as recently as last year, in her debut performances in the title role. Her fawn-colored soprano sometimes came out disconcertingly tense and bottled, especially when she reached into the depths of her lower register during the monologue, and pitch responded accordingly. 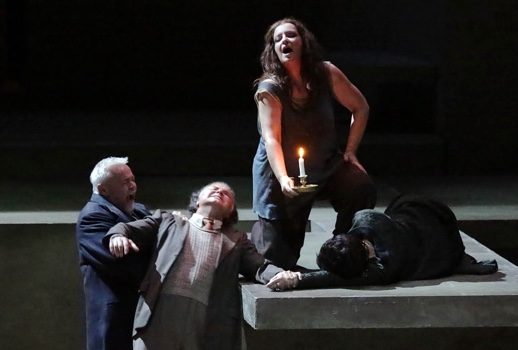 However, her high notes shone as impressively versatile and she most gratifyingly uses them to ride the orchestral climaxes, gaining energy from, instead of being overtaken by, Strauss’s swells of sound.

And beyond that, she moves with an arresting beauty and naturalism that was both unexpected and welcome (and her port-de-bras would make Ulanova proud). Merbeth’s Elektra shows dramatic potential for the role and though the Chereau production leaves minimal wiggle room for individual interpretation, that might have been for the best as she grows with the part and (hopefully) works it into her voice a little easier.

The Chrysothemis of Regine Hangler proved both a refreshing and enigmatic choice. It’s a uniquely youthful sound, projected with ease and evenness, though it exemplifies what happens when a voice that gleams is also a voice with glare. As Elektra’s homebound sister rockets her soaring, idealistic vocal lines into the atmosphere and away from the Mycenean palace, Hangler’s high-set, hyperfocused pleas sounded more like juvenile whines.

Though Chrysothemis is, indeed, the little sister that gets on Elektra’s nerves, the lack of vocal coloring or sumptuousness here left the sympathetic role seeming only partially inhabited.

More curious, though, was how Waltraud Meier’s well-traveled Klytemnestra also felt partially inhabited. There remains little as yet unsaid in this forum about Meier’s assumption of the part, exchanging the Agamemnon’s consort’s commonly-seen harridan histrionics for a glamorous housewife’s understated anxiety.

But despite history with the role, she projected on Wednesday mere familiarity rather than authority with the music and text (something that couldn’t be said for her Met performances). She relies on an increasingly thinning voice, speaking/declaiming less of the role than she probably ought to, to conjure up the character, but a three-dimensional Klytemnestra only occasionally appeared. Her scene came and went with surprisingly little impact.

The Orestes of Michael Volle merited the long wait, both for his stern but enveloping vocalism and his fascinatingly skeevy paternal manner onstage. The Recognition Scene was as compelling here as I have ever seen it, both because of Volle and because of Markus Stenz in the pit.

Coming over from La Scala’s current acclaimed run of Fin de partie to replace an ill Christoph von Dohnányi, he drew from the spirited La Scala Orchestra a swirling, detail-rich reading of the score that revealed nuance without stinting the opera’s trademark visceral thrill.

Roberta Alexander, sympathetic and in luminous voice, reprised her performance as the Fifth Maid and Roberto Saccà sounded like an especially impotent Aegisthus, pinched and forceful in his delivery.

As Elektra fantasizes about reclaiming her father’s memory in his house, she imagines what others will say when Elektra and her brother and sister are joyously restored to power: “Behold how great a king is here exalted, and happy is he whose children on his mighty grave dance so royal a dance of triumph!”

In reviving this Elektra, a production I had once thought unrevivable, we exult three great kings and the bountiful artistic inheritance they left us: Strauss, Hofmannstahl, and Chéreau himself.

But as audience members, especially repeat viewers, the triumph is ours. Let the dancing begin.