Saturday night I navigated the Music Center concourse, or what’s left of it with it’s seemingly eternal construction to the main plaza, wending my way to the Dorothy Chandler for the opening night of LA Opera’s Hansel and Gretel. 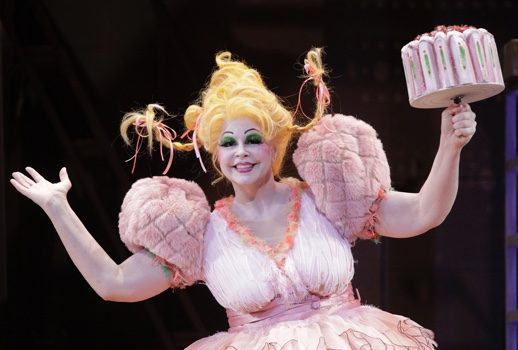 Saturday night I navigated the Music Center concourse, or what’s left of it with it’s seemingly eternal construction to the main plaza, wending my way to the Dorothy Chandler for the opening night of LA Opera’s Hansel and Gretel.

After having checked out the new Upstage Burger venue (Oh, hooray) I was suddenly standing in front of a young gentleman wearing what could only be described as “dress” Lederhosen (black with opulent silver thread-work), a smoking jacket, and a string of blinking, mini-Christmas lights around his neck. “Well”, I thought, “This must be the place.”

I think my first exposure to any opera at all came from a Disney recording of the story with of Hansel and Gretel with excerpts from the opera. I was reunited with it thanks to a friend recently and was surprised to discover that the Gretel was none other than Marni Nixon, famed Hollywood voice-dubber (!)

When this production debuted at LA Opera in 2006 I wasn’t much interested in spite of a solid cast and Alan Gilbert in the pit. I had just seen artist Doug Fitch’s “ice blocks lit from within” production of Turandot at Santa Fe Opera the previous summer and had been decidedly underwhelmed. So I took a pass on his Hansel in spite of the wonderful reviews it received at the time and enjoyed the KUSC radio relay. I don’t mind eating a little gingerbread now and saying that was a wrong call.

But first the pre-game talk by Music Director James Conlon who took us through an illuminating tour of composer Engelbert Humperdinck’s musical influences and those conductors who championed his score.  I almost started to wonder why you never see this piece performed in concert. The orchestrations are so lush and grandiose. 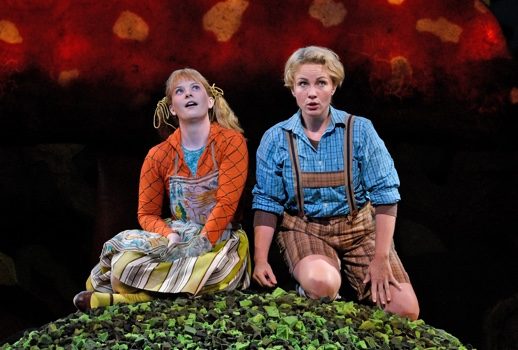 But the visual elements in Fitch’s production, for which he designed not only sets and costumes but directed, answer that question handily. So many moments of stagecraft and magic that they would be impossible to recount here. Influenced by everyone from Mary Blair to Maurice Sendak and Jim Henson, and maybe a little David Hockney, the forest shape shifts constantly in abstract forms.

Its inhabitants, a motley crew of dwarves and creatures of all sizes, are delightful and add a welcome poignancy to a staging that eschews the traditional symbols (no angels, sorry).

The importance of lighting designer Duane Schuler’s work cannot be underestimated either. Giving the forest scenes, with their three dimensional elements enhanced by rear projections, a sense of unending depth. He deftly lit the first desirably edible looking gingerbread house I can recall which was full of surprises including a Fireman’s pole lollipop.

The cast, almost half of which are alumni of our Domingo-Colburn-Stein Young Artists Program, was superb. Liv Redpath whom I’ve admired since I first hear her beguiling soprano in a range of character parts was spot on as Gretel. The roles difficulty is often underestimated and it’s not an easy sing. She was particularly enchanting in the forest scenes and her voice increased in size as the evening progressed and her confidence grew.

Sacha Cooke as Hansel was a charming and vivacious Hansel who had all the right body language for the part. She also possesses one of those rare, rich, voices that projects into the theater with a completely even scale regardless of pitch. Funny that I noticed the other night, while bingeing Hansel’sin preparation, that she was the Sandman for the Met’s relay 10 years ago. A perfect promotion and a most welcome debut with the company. 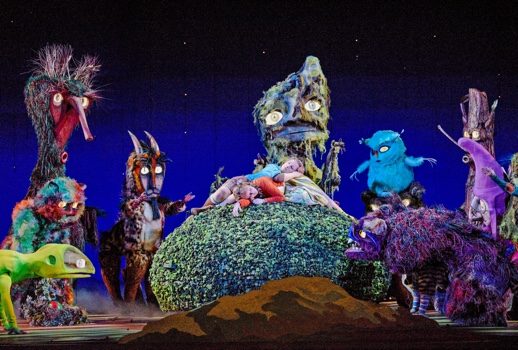 Craig Colclough as father Peter began his career with LA Opera not too long ago and returns regularly having matured into larger international assignments. He was a rousing Monterone in our recent Rigoletto and his warm bass-baritone rang out wonderfully on his entrance and made his scenes, and in particular his role in the finale, especially moving.

As his wife, Gertrude, soprano Melody Moore, who was last seen here as Tosca, was an embarrassment of riches. Having admired her Desdemona on the recent Pentatone release of OtelloI was excited to hear her live on stage. Dauntlessly made up 20 years older than she really is she invested the role with equal parts of vocal thunder and warmth. I’d say Humperdinck’s writing here is pretty shrewish but Ms. Moore gave it her all with her refulgent tone and even did some nifty dominating of the ensemble in the works final pages that did not go unnoticed.

Two other members of the young artist’s program brought delight in their cameos as the  Sandman and the Dew Fairy.  Taylor Raven proved a gifted choice as the former glittering in gold from head to foot and relishing in the long lines of the vocal writing as she wished the children a good night. Sarah Vautour’s Sandman is a showstopper in every way imaginable as she glides across the stage at the top of a her twinkling perch in sumptuous voice greeting the dawn.

The announcement of none other than Susan Graham as the Witch raised a few eyebrows, mine included. Ms. Graham is esteemed by many, myself included, as one of our greatest artists. Her recitals are veritable masterclasses and I don’t think I have ever recovered from the performance she gives of Reynaldo Hahn’s “À Chloris” on her live recital from Carnegie Hall.

Justly famed for her interpretations of Berlioz, Strauss, and a dozen other composers she’s also known for a having a pretty healthy sense of humor. Nonetheless sometimes nothing worse than a great artisté out having a lark as it were. All apprehension flung aside from the moment of her first entrance as a cross between Baby Jane Hudson and Cindy Lou Who gone to seed. 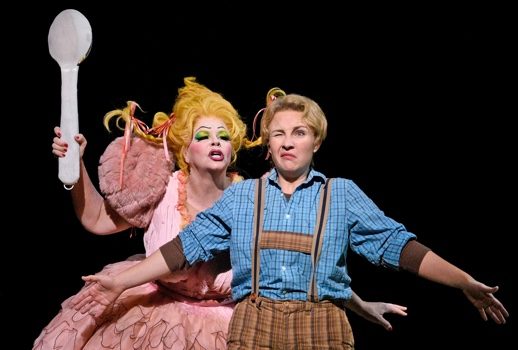 She worked the role for every last drop of comedic and diabolic inspiration. Her diction was clean (maybe the best of anyone’s all evening) she sang every grace note and trill the composer wrote (even on recordings you don’t get that) and had the audience eating out of the palm of her crooked hand.

Her “Witch’s Ride” was not only Wagnerian in scale but beautifully sung. When she paused to take a tired drag on a cigarette while complaining about her age I was in stitches. She even knocked her own knees together in time with her trills. I bow low.

None of this would have been possible without Conlon coaxing the LA Opera Orchestra onto glory throughout the evening. The horns and percussion especially commending themselves in this difficult piece. The score just gushed out of the orchestra pit all evening, My only regret is that the staging and performances are so strong many parts of the score went by before I could concentrate on appreciating them. So much for the eye and ear at once can be overwhelming.

I do have a minor quibble and that’s with English libretto of Richard Sparks which is nothing resembling a translation and more a complete re-writing. Not that we’re talking about a sacred text by any means but it’s maybe even more foolish, frankly, that what it replaces. David Pountney’s translation for his 1987 English National Opera performances seems to be the modern consensus (Charles Mackerras even used it on his Chandos recording) and Mr. Sparks “no-rhyme-left-behind” approach grew tiresome even before the spilled milk.

I’ve intentionally held back on so much of the staging because it really is magical and enchanting and just grows more so as the evening progresses. The participation of the Los Angeles Children’s Choir in the last scene, with it’s medley finale, is just the icing on this beautiful cake. Five performances remain until 15 December and this is as close as I can get to enticing you to the Music Center before you make the same mistake I did 12 years ago.