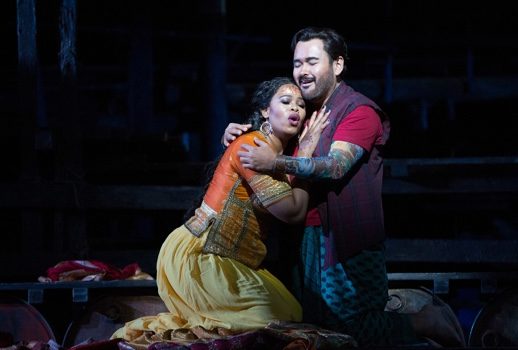 During the intermission of Les Pêcheurs de Perles at the Met Saturday night, I mused to my friend that I had missed out on Wednesday’s newsworthy season premiere when everyone went gaga over a “star is born” moment when a young baritone made his surprise debut mid-performance replacing an ailing colleague.

But, wait! Lightning sometimes does strike twice: as the lights went down came an announcement that Mariusz Kwiecien had—again—suddenly taken ill and Alexander Birch Elliott—again—would take over! Elliott’s dynamic if gauche Zurga at least added some pizzazz to an otherwise bland evening.

A return was quickly scheduled for this season with a new soprano, tenor and conductor and the results were markedly less happy.

Pretty Yende and Javier Camarena have recently been paired a lot—there was a single Puritani at the Met a few years ago when she jumped in for Damrau and they just finished a run of that same opera in Barcelona. After this series of Pêcheurs they will be back at the Met in February as Marie and Tonio in Donizetti’s La Fille du Régiment which I suspect may be a better fit—at least for the tenor who was here miscast as the pining Nadir.

Camarena has had a startling string of successes in bel canto operas at the Met since his debut in Il Barbiere di Siviglia in 2011. His eager and appealing demeanor combined with an inexhaustible meteor shower of pinging high notes has made him an audience darling. Bizet’s hero though requires a subtler approach than he delivered, and his bright and tightly wound voice made an uneasy fit with the opera’s two swooningly lyrical show-stopping numbers, Nadir’s “Je crois entendre encore” and the rapturous duet with Zurga.

It’s not as if he didn’t try—fining down his voice to deliver his aria introspectively at the side of the stage—but he, like most, couldn’t resist adding the show-offy high reiteration of the final phrase, an effect Bizet never intended. That his French was just awful didn’t help. His most successful moment was the passionate reunion duet with Leïla in the second act in which he spun an appealingly seductive line.

That duet was also when Yende excelled in an otherwise troubling outing as the delinquent virgin. After an appealing Met debut as Ad?le in Le Comte Ory and a pleasant Pamina in Die Zauberflöte I’ve been troubled by her most of her performances. The Porgy and Bess duet with Eric Owens at the Lincoln Center 50 Gala was distressing and last spring’s Lucia strikingly uneven, but Leïla which one might expect to pose fewer challenges was equally problematic.

Intonation was often erratic and for someone whose repertoire this season boasts further performances of Lucia, Elvira and Amina in La Sonnambula the occasional intricate melismatic passages Bizet provided for his heroine were distressingly off-kilter. Trills came and went but none were particularly successful and the same could be said for her high notes. Ravishing phrases alternated with pedestrian ones and the intensely dramatic duet with Zurga found her sounding nearly pressed beyond her means.

While she has an immediately attractive stage presence, she doesn’t come across as a particularly effective actress. Woolcock gives Leïla lots of business with her veil which Yende executed very awkwardly which ended up just looking silly. Given their frequent pairing, I was surprised how little chemistry with Camarena came through, either vocally or dramatically.

Last season’s Adina suited her better, charming and by the end of the run nicely sung. Returning to Mozart could prove wise—Susanna might be quite lovely but I just don’t hear her commanding these big bel canto heroines. That she’s scheduled to take on Violetta in a new production of La Traviata in Paris next fall is downright alarming.

Bass-baritone Nicolas Testé returned as Nourabad, a role which doesn’t do much but look stern and make a few solemn pronouncements. He sang well enough and his native French style was a genuine relief to hear.

I was relieved when I heard Kwiecien during his single act; after Wednesday’s cancellation I was prepared for worst but he sounded as well as he has lately. The voice has now lost any plush or beauty but it rang out sturdily and he partnered Camarena in an efficient if unmagical “Au fond du temple saint.”

I shouldn’t have been that surprised though when he dropped out at intermission: he does it quite a lot it seems. Just last year he twice fled Don Giovanni in mid-performance. A source tells me that if a singer completes at least the first act he receives his entire pay, so the Met has so far gotten a pair of half-Zurgas from Kwiecien for two full fees!

In the over 30 years I’ve been going to the Met, such a dropout has only happened to me once before: Eva-Maria Westbroek gave up Sieglinde at the premiere of the Lepage Die Walküre after Act One although the announcement wasn’t made until just before the third! 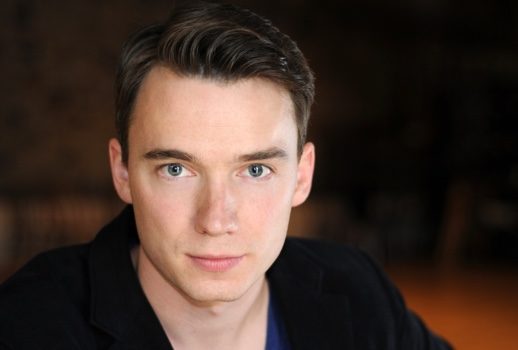 By Saturday Elliott was fully ready for his close-up and he had to take over at the role’s most challenging moment, Zurga’s fiery denunciation of the discovered lovers as the roiling storm threatens the assembled community. The American baritone revealed a sturdy voice of good size endowed with a pleasing fullness and bloom missing from Kwiecien’s.

The long duet with Leïla found him gesturing rather chaotically which might suggest he hasn’t had a lot of stage experience—at least not in as grand a theater as the Met. But he evinced a touchingly wounded vulnerability as he slowly realized that she was the one who had once saved his life as well as the mystery woman desperately in love with his best friend.

All in all Elliott acquitted himself well, probably more confident after Wednesday’s baptism by fire. In addition to his sizable voice, he also revealed—as Zurga is gratuitously required to strip off his shirt at the beginning of the third act—big Instagram-ready pecs and guns.

Emmanuel Villaume who had led such an elegant Thaïs last season struggled with Bizet’s colorful if naïve score. In the first act in particular he seemed to be battling his singers rather than leading and supporting them but matters were calmer by the time the storm hit. The chorus which has been doing a lot of heavy-lifting this season seemed slightly off-form, maybe devilishly depleted by Mefistofele.

Perhaps the novelty of Pêcheurs andthe striking production and strong cast three years ago made it easier to overlook the slight score and oftentimes silly libretto but this go around its minor charms had substantially faded.

And perhaps after Samson et Dalila and Die Königin von Saba, I’d become sated by mid-19th century exotically-flavored faux-religious spectacle. At least this time no one died, although there was severe property damage from Zurga’s altruistic act of arson.