Too bad, then, that this season’s tossed flower was a bit of a wilted one. 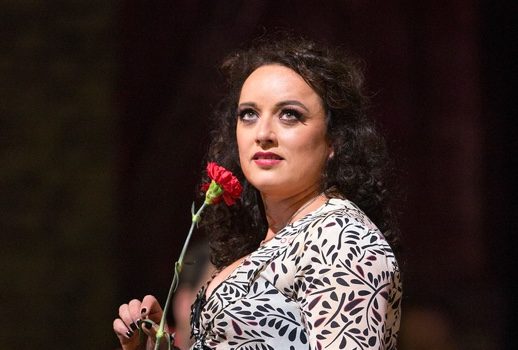 Since it debuted in 2009, the Met’s Richard Eyre production of Bizet’s Carmen has beguiled audiences with its tense, vivid portrait of tormented love in Spain. Here, the old yarn about a corporal of dragoons who swaps reason, virginal girlfriend, and mama-love for a vampy seductress is reset in Civil War-era Seville.

It’s an update that usually works. Not only do Rob Howell’s turntable sets, bull carcases, and bolero costumes evoke a Picasso exhibit; they offer more than enough scenery-chewing material for the show’s big numbers.

And despite the occasional treacly choice—why we’re replacing the opera’s spoken dialogue with Ernest Guiraud’s half-baked recitatives is something I’ll never comprehend—for me the staging feels germane and mostly relatable overall, while balancing pomp with earnest psychological depth, a core Carmen requirement.

Too bad, then, that this season’s tossed flower was a bit of a wilted one. While Saturday’s performance served up several welcome moments of expressiveness, the vocalizing fell largely flat, with characterizations that sounded alternately phoned in, distant, or… surprisingly unmusical?

The main culprit here may well have been conductor Omer Meir Wellber, direct from Be’ersheva, who’s making his Met debut with this production. A brazen, hammy maestro slated to helm the BBC Philharmonic next year, Wellber bounded into the ring with a whip-fast overture that drew gasps, a quintet that didn’t jaunt so much as sprint, and an entr’acte so bizarrely molasses-slow and cloying I felt as though I’d just deep-throated the flute.

Aside: someday someone will write an award-winning dissertation on lady actors who think hyperextending their crotches when they take a seat is enough to evoke “earthy.” If I were to write said thesis, I would definitely devote a chapter to Katrina Lenk’s lusty performance in The Band’s Visit, Anna Magnani, or basically anyone who tries on Minnie in Fanciulla del West.

Other earthy episodes included Migraine washing her feet in a bucket, engaging in a floor-rolling brawl with another cigarette girl, and singing the Seguidilla with unblottable blood dripping from a gash in her romany thigh.

On the night I attended, the mezzo’s voice was occasionally straight-toned and hollow, her sound oddly muted on the Habanera. But there were echoes of past glory: a few soaring high here and there, and some exquisite examples of  messa di voce in the card scene.

Opposite her, the Don José of Korean tenor Yonghoon Lee posed other contradictions. Lee has a hunky, muscular top to his voice, especially handy for his Flower Song. But in the midrange, the sound thins and turns metallic, with some breath control issues that at times caused him to emit some supremely unattractive bleating.

All the same, I was intrigued by the man’s flair for theatrics: Don Jose must be one of opera’s most Freudian and pathetic figures, and Yonghoon laid the pathos on thick, clutching Carmen with schizoid conviction.

Unrelatedly, someone should get him a haircut. A bowl cut is unbecoming of a soldier.

The evening’s star turn belonged to Guanquin Yu as Micaëla. I do wish Eyre had given the heroine a bit more to do onstage than wander around in her espadrilles and French braid, clinging virtuously to a girl-scout purse. But Yu—no great shakes as an actress, though her lyrical soprano should get recruited more—acquitted herself gloriously, delivering a melting “Je dis que rien ne m’épouvante” that all but stole Act 3.

Supporting players were all nicely cast. Representing Granada, barihunk Kyle Ketelsen’s Escamillo was a swaggery vision in sequined hot pants; he endowed the Toreador song with equal helpings of sex and machismo. As Frasquita and Mercedes, Sydney Mancasola and Sarah Mesko dialed up the comedy. And both the Moralès of Lindeman member Adrian Timpau and the Zuniga of Richard Bernstein showcased the performers’ acting chops.

I do wish Christopher Wheeldon’s choreo were a bit less literal and “Spain=flamenco.” Still, I found myself transported by the balletic interventions of Martin Harvey (gloriously demi-nu) and Maria Kowroski, both of whom danced with this production in 2009.