Logistically, a large-scale revival of the operas of Giacomo Meyerbeer is an unreasonable request, much less an expectation. 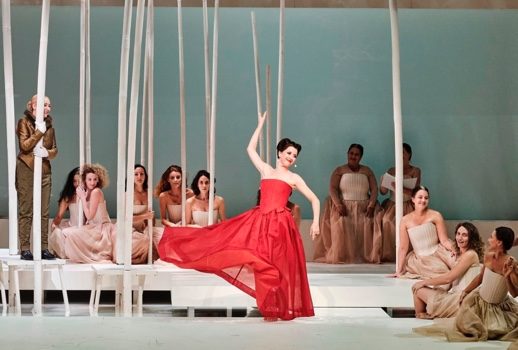 Logistically, a large-scale revival of the operas of Giacomo Meyerbeer is an unreasonable request, much less an expectation. They’re big, they’re long, and they are rather difficult to wrest from their gilded frames – that’s all money better spent pushing the medium forward with new opera. This isn’t to say that his operas aren’t good – far from it, in fact. There is, however, lots of good opera.

In a glorious bit of historical irony, though, if there were to be a revival of performances and interest in Meyerbeer’s works, we might have Richard Wagner, whose antisemitism was never uglier than when it was spent wiping Meyerbeer off the map, to credit for it. We view Meyerbeer (as well as almost every other opera performed) in 2018 through a Wagnerian lens, a closed-door, world-eschewing performance practice dependent on the synergy of music and theatre that was built and tested at Bayreuth and shipped worldwide.

Les Huguenots did not breathe its first (or most of its subsequent breaths) nor achieve its success amidst Wagner’s idealized contemplative darkness, recessed orchestra pit, and painstaking theatrical realization – but it is how we appraise it today, and how I took it in at the Opéra Bastille last week.

But whether or not you enjoy Les Huguenots from a gas-lit box while feasting with your wife and friends as your mistress arabesques onstage or from the comfort of a modern opera house that offers an overpriced jambon-beurre and a soggy éclair for its intermission nibbles, both can agree that there is plenty to enjoy. The story of forbidden love between a Catholic and a Huguenot, orchestrated by the Queen of Navarre, a surprisingly gripping confection of historical fiction that would make The Other Boleyn Girl blush, sprawls across some five and a half hours, more than several characters, and the looming threat of the St. Bartholomew’s Day Massacre.

Meyerbeer’s music, richly orchestrated and compellingly married to a libretto by Eugène Scrib eand Émile Deschamps, cuts incisively through the story and distributes both dramatically and vocally demanding scenas across its principal characters. He even does that thing where certain passages of music connote elements in the drama. You know the thing. It all makes sense and manages to captivate across its generous duration (somewhat less generous here since Paris jettisoned the entire ballet in its 350th anniversary production).

A true occasion from the first day it was announced, this remounting of an Opéra staple was delicately undertaken by Andreas Kriegenburg. Playing out on pristine, grid-like sets (that could have benefitted from some WD-40 during squeaky mid-act transitions) by Harald Thorand in streamlined period costumes by Tanja Hoffman, the story received a suggestively evocative realization.

Kriegenburg opted to develop characterization over concept which seemed a smart choice for a piece whose moral of religious intolerance feels so relevant but its setting not as much. Smarter nuances in the staging (the self-indulgent, literally masturbatory nature of weaponizing religion) compensated for smaller, superfluous ones (the group executed onstage at the end of the opera in modern dress!) contributing to a smooth, emotionally rich rendering of the opera.

This angle might not have played so well were it not for the extraordinary acting abilities of much of the cast, chief among them Ermonela Jaho as Valentine. Though she was announced as ill from the stage before the overture, her performance didn’t let on. As I’ve seen her do before, her chestnut-colored soprano bit into the material, gnawing on the text and wincing with conviction.

As the repressed daughter of a Catholic nobleman, she displayed such visible torture and anguish, especially in Acts III and IV, that the agonized writhing was sometimes hard to watch. Vocally, though, she never strayed from a well-supported if grainy tone, even whilst being manhandled (then eventually murdered) by her father, the Count de Saint-Bris (Paul Gay as a wiry and effective leader of the militant Catholics).

Valentine meets such a miserable demise because she is relentlessly in love with the Huguenot Raoul de Nangis that once saved her from an attack. Over the course of the opera, she’ll be repeatedly spurned by him, having instead to marry his Catholic friend the Comte de Nevers, until he finally reconciles their original love as the threat of the massacre becomes imminent. If only Yosep Kangas Raoul had seemed so worth fighting over.

Though I desperately wanted to like the Korean tenor who jumped in for Bryan Hymel several months back, I found myself at a loss. His tenor, both nasal and muscular, became dense and blunt in alt high notes, and he otherwise spent much of the performance “hiding” in falsetto. It wasn’t the falsetto that bothered me, per se (what’s a French opera without a little voix mixte?), but the gear shifting that was audibly uneven. While his Act I aria was phrased with some forceful authority (maybe more than necessary for such a delicate aria), things really fell apart in the Act IV duet with Valentine, with cracking, flatting, and inappropriate falsetto making more of an impact then his enthusiastic acting.

If the singing wasn’t quite as congenial as the character is, Kang at least provided a good counter for the other singers, especially Florian Sempey as de Nevers. With a firm, idiomatic baritone, flexible but with enough authority to make him ideal for this kind of rep, this sympathetic Catholic benefitted from Kriegenburg’s diligence, moving in an outsized arc from well-meaning frat boy at his Act I party to indignantly refusing to take part in the massacre in Act IV.

That Act I party also provided the successful complement of Nicolas Testé’s Marcel, a fanatical Huguenot that behaves at de Nevers’s the same way your cousin that voted for Trump does at Thanksgiving. Testé’s melancholy bass, shallow but commanding, was antagonistic in its solidity and maintained its virulent character even when the character becomes something of a Friar Lawrence to Raoul and Valentine.

But the vocal honors of the evening absolutely belonged to Lisette Oropesa’s recording-ready Marguerite de Valois. New Yorkers have, until recently, had the privilege of following Oropesa’s steady rise, but it’s the French that are reaping the benefits with this Marguerite and her ongoing Adina in Elisir. Also a late-in-the-game replacement (for Diana Damrau), Oropesa’s charm and agility onstage almost outshone her exquisite singing.

Marguerite’s murderous opening aria, “Ô beau pays,” equitable to performing “Großmachtige Prinzessin” over breakfast, held absolutely no fears for her as she unrolled her milky, ebullient soprano like a satin ribbon with not a single note out of place. It was one of the most perfect executions of anything that I have ever heard (live or on recording), and she only grew in impact as the flirty, lighthearted Marguerite (whose court sits around all day reading and sipping rosé) became gradually weighed down and overpowered by the conflict surrounding her. If you’re used to a formaldehyde-scented Dame Joan’s

?t=2476″>issuing edicts from a gilded throne, Oropesa’s Marguerite will really throw you for a loop.

Happy is the court run by Oropesa’s Marguerite that also hosts the Urbain, the Queen’s very pre-pubescent page (just look at that tessitura!), of Karine Deshayes. Plucky and androgynous, Deshayes’s warmly-received mezzo cheerfully shone out over the orchestra and delivered “Nobles seigneurs” (as well as several letters) with vigor.

In the end, not even Marguerite’s sovereignty nor matchmaking can avert the ugly manifestation of religious intolerance. It’s a theme the opera makes grimly apparent and one that conductor Michele Mariotti teased out over the course of the evening. Driving tension in scenes both public and intimate, Mariotti whipped the Orchestra into a propulsive, violent frenzy that made the opera’s grim conclusion all the more imminent but nonetheless impactful. The Chorus followed suit, combining powerful sound with wonderfully together French diction.

Maybe it’s all the “Marias” and “Somewheres” we overdosed on during this Bernstein centennial year, but as I watched the starcrossed lovers struggle in Les Huguenots, I couldn’t help but think of this seminal piece’s wide-reaching influence which seems to hint at musical and dramatic themes from Verdi to Strauss and beyond.

Civil blood has made civil hands unclean for centuries – for whatever reason, we like to accompany the dramatic representation of that with ballet. That we can do it in different, yet effective ways across the centuries is certainly as much a testament to Meyerbeer as it is to the creative spirit. Two productions of Candide later, I think that watching Les Huguenots in Paris last month was the best way I could honor the Bernstein centennial, the Opéra’s 350 years, and this grand old operatic tradition that continues to reel us in only to set us adrift anew.

In a way, I think that watching Les Huguenots in Paris last month was the best way I could honor the Bernstein centennial. Its story of forbidden love amongst strained factions, woven with complex characters on a loom of historical strife, feels bristling relevant, and that’s not just because we all just finished a year rife with “Maria”s and “Tonight”s. Civil blood has made civil hands unclean for centuries – for whatever reason, we like to accompany the dramatic representation of that with ballet.

The degree of removal we feel from the St. Bartholomew’s Day Massacre lends Meyerbeer’s sprawling musical tapestry a specificity in its timelessness and its airbrushed and contoured depiction of history makes it a piece of historical fiction as entertaining as The Other Boleyn Girl.

Back at the Ranch, the natives (and those who want you to know that they’re in the know) are getting restless for a revival of Meyerbeer’s operas, pieces packed to the gills with virtuosity, spectacle, dramatic coherence, and ambience. While logistically, that’s an unreasonable goal, mathematically, a Meyerbeer revival seems inevitable, though its motives are paradoxical.