With Liber scriptus came the biggest discovery for me, the vocal talent of Elena Stikhina. 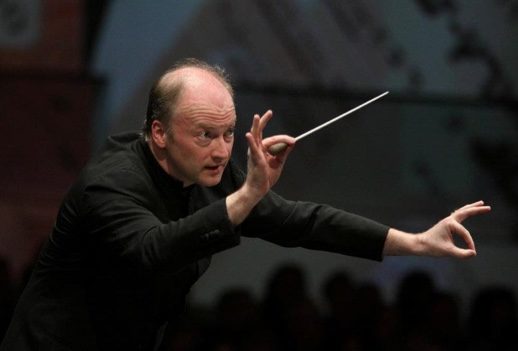 In 1962, commissioned to mark the consecration of the new Coventry Cathedral, Benjamin Britten wrote War Requiem, Op. 66, a massive choral work where he set the traditional Latin Mass of the Dead interspersed with nine poems about war by English poet Wilfred Owen.

The requirement for this work is truly enormous, as it is scored for soprano, tenor and baritone soloists, chorus, boys’ choir, organ, and two orchestras (a full orchestra and a chamber one); the chamber orchestra accompanies the intimate settings of the English poetry, while soprano, choirs and orchestra are used for the Latin sections.

Britten intended that the soloists to be Galina Vishnevskaya (a Russian), Peter Pears (an Englishman) and Dietrich Fischer-Dieskau (a German), to demonstrate a spirit of unity. Unfortunately for the premiere the Soviet authorities did not permit Vishnevskaya to travel for the event, so Belfast-born Helen Harper ultimately stepped in. Britten, however, managed to gather the trio for his definitive recording the following year.

When this program was first announced, Mariss Jansons, Royal Concertgebouw Orchestra (RCO) Conductor Emeritus, was scheduled to conduct. Jansons was no stranger to the score; he performed and recorded the piece with Emily Magee, Mark Padmore, Christian Gerhaher and Bavarian Radio Symphony Orchestra in 2013.

Unfortuntely, a month prior to these concerts, he withdrew because of illness, and Italian conductor Gianandrea Noseda, making a Concertgebouw debut, replaced him.

Noseda too had championed the work with his 2011 acclaimed performances with Ian Bostridge, Simon Keenlyside, Sabina Cvilak and London Symphony Orchestra, which subsequently traveled to Avery Fisher Hall as part of Lincoln Center’s White Light Festival.

For these concerts RCO had painstakingly assembled a trio of soloists that mirrored the nationalities of Britten’s original trio; Russian soprano Elena Stikhina, veteran British tenor Mark Padmore and German baritone Michael Volle. This was also my main reason for seeing this. In addition, they took great care regarding the sonics.

The chamber orchestra, led by concertmaster Liviu Prunaru and consisted of a few musicians of the RCO, were placed to the right of the podium, with Padmore and Volle right in front of them. The Nationaal Kinderkoor (National Children’s Choir) situated behind the chamber orchestra. The rest of the stage was populated with the RCO, and the combined force of the Netherlands Radio Choir and Flemish Radio Choir directly behind them on the left. Stikhina sat far at the back of the hall, behind the choir, next to Concertgebouw’s majestic organ.

From the start, Noseda led the performance (seen on 10/12 and was recorded for Mezzo liveHD) with assured hands. The hushed opening of Requiem aeternam was rendered beautifully, with prominent bells. The boys choir were truly an asset in this performance, as they sounded angelic and ethereal.

Padmore took the performance super seriously, he didn’t even let a single smile throughout the performance. His opening “What passing bells” was very lyrical, every word was coaxed with emotion, almost to the point of being painful. (I was sitting second row from the stage in front of him, so I could see his facial reactions clearly.)

Britten admitted the stylistic influence of other Requiems especially Verdi’s on his work, and to me, this manifested most obviously in the Dies Irae. In Noseda’s hand, that inspiration made even more pronounced. Noseda, who seemed to prefer extreme dynamics, made this section almost as terrifying as Verdi’s. I loved Volle’s take on “Bugles sang,” equally lyrical but sounded effortless, made a striking contrast with Padmore.

With Liber scriptus came the biggest discovery for me, the vocal talent of Stikhina. Making her Netherlands debut with these concerts, she was truly a voice to reckon; seemingly unfazed by her placement at the back of the stage. Her warm, commanding soprano boomed across the stage, and she negotiated the many interval jumps in Liber scriptus courageously.

I particularly loved the few duets between Padmore and Volle, especially on “Out there, we walked quite friendly up to death” and the final duet “Strange Meeting,” as their voices contrasted and complemented each other. Volle’s resignation on the last words “I am the enemy you killed, my friend” of “Strange Meeting” made an exceptionally poignant statement. I was also super fond of Lacrimosa, where Stikhina and the chorus traded melodies back and forth, making a truly spectacular sonic effect across the stage.

Noseda worked really hard conducting this, and by the end he looked sweaty and disheveled, but extremely satisfied. This was a very fine debut for him. The audience showered the performers with full-house standing ovations that lasted more than 15 minutes, enough time for Noseda and the soloists to traverse the steps of the Concertgebouw three times (or maybe four? I lost count).

The last opera of the trip was the one that I was truly anticipating, the super rare pastorale héroïque by French composer André Cardinal Destouches, Issé. Thiswas Destouches’ first opera. His life was a story in itself; he was a student of the Jesuits, and age 15 he went on a mission to Siam and entered military career upon return. On the battlefield, he decided to become a musician and studied under Campra.

Issé’s libretto was by Houdar de la Motte, who also wrote Campra’s L’Europe galante. It was first performed in a concert without prologue at the Palace of Fontainebleau on 7 October 1697. At the request of Louis XIV, a prologue was added for the official premiere, a concert performance on 17 December at the Trianon (Versailles) for the marriage of Princess Marie Adélaïde of Savoy to Louis’ grandson, the Duke of Burgundy.

The first full staging by the Paris Opera was on 30 December 1697 at the Théâtre du Palais-Royal in Paris. Destouches revised it in a grander five-act form for its revival at the Palais-Royal on 14 October 1708, and that was the version being presented at Opéra royal de Versailles in concert style on 10/13.

To see this rare French baroque piece at its birthplace was indeed a special occasion, to me at least. I decidedly dropped Les Huguenots at Opera de Paris for this, and I wasn’t disappointed at all, as it was truly an awesome night with delightful singing. My only quibble was that while Opéra Royal had had English supertitles on their shows of late, unfortunately for this performance they decided not to have it. (Understandable for this was one night only performance.)

For an opera this rare, I would prefer to know what they were singing about. Fortunately, the program included the full French libretto, so that I could follow through and prevent myself from falling asleep.

The story itself was pretty slight, although it was filled with all the required amorous twists and turns; Apollo, disguised as the shepherd Philémon, has turned his attentions to the nymph Issé, while Pan takes an interest in Doris. It all ended happily (or so I thought, as they were all smiling at the end!)

I wasn’t familiar with the conductor Louis-Noël Bestion de Camboula sand his period-ensemble Les Surprises beforehand. I was pleasantly surprised indeed (pun intended) for their playing was spectacular and his conducting (and harpsichord playing) was lively and exciting. He emphasized the dance element of the score, and that made a very fun evening.

The singers were all excellent. I was most impressed with Mathias Vidal as Apollo/Philémon. His agile, bright tenor voice was perfect for the haute-contre role, and he was extremely expressive as well. As the title role, Judith Van Wanroij, with her rather dark-colored soprano voice, embodied a womanly Issé.

In stark contrast, Chantal Santon-Jeffery’s bright soprano gave a flirty, playful side to Doris, complemented the gruff, masculine voice of Matthieu Lecroart’s Pan. Those two couples were very well matched, and they were having so much fun singing the score. Other comprimario roles were handled efficiently, many of them were also part of Les Chantres du Centre de musique baroque de Versailles, who commented on the action  effectively.

Although this show was billed as opera in concert, it was actually semi-staged, particularly in terms of entrances and exits. Doris and Pan especially were acting flirty and suggestive with their glances and even embraces.

All in all, this was a truly outstanding night at the Opera, and perfect show and venue to end my trip with a bang! The website mentioned that this program was recorded by the label Ambronay, and I did see various recording devices at the opera house, asI truly wish to relive this moment again, preferably with English translation this time!