I really cannot exaggerate the extent to which I truly did not know what was going on in New York City Opera’s production of Maria de Buenos Aires. 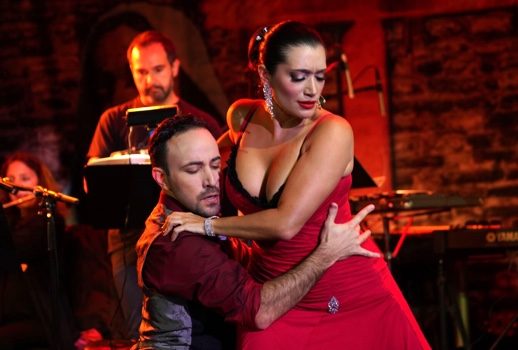 I really cannot exaggerate the extent to which I truly did not know what was going on in New York City Opera’s production of Maria de Buenos Aires.

Staged immersively on Monday night in the basement venue of downtown nightclub Le Poisson Rouge, with singers and dancers moving freely from the club’s small stage to the aisles between its candle-lit tables, the show is significantly higher in energy than it is in creative concept.

The result of this lightly-sketched approach is that one’s encounter is really with the show itself. And the show, a 1968 “tango operita” by tango revolutionary Astor Piazzolla is so truly bizarre that neither the fabulous music nor the impressive performances it showcases can make it feel like a piece of relevant or important storytelling.

Maria de Buenos Aires is, as far as I could tell, about a woman who is sexy in the way that in opera is as good as a death sentence. So, of course she dies—or maybe she only dies metaphorically, I couldn’t tell—and then is perhaps reborn, potentially as her own shadow, and psychoanalyzed at the circus.

This is not to knock the performances, which are uniformly full-blooded and committed. In addition to two singing roles, one speaking role, and a small ensemble, Maria de Buenos Aires features two first-rate tango dancers, Analia Centurion and Jeremias Fors, who bring a level of intensity and drama to their choreography more outsized than Le Poisson Rouge’s small nightclub stage.

Catalina Cuervo holds the record for the most performances of Maria in the role’s history, and it is easy to see why; her smoky, powerful chest voice handled gloating tangos and overblown ballads alike with confidence, energy, and sex-appeal.

Equally self-assured are the men; although Marcelo Guzzo as El Payador seemed a little uncomfortable with having his rich baritone mic’ed for the nightclub space, he still gave his all to a role that mostly involves belting out ominous proclamations of Maria’s imminent fate.

So too does Milton Loayza as El Duende, a second narrator figure. This is a more impressive feat, as the role is non-singing, and the arcane purple prose of the libretto is far more believable sung than shouted. Loayza did his best, stalking between tables with a steely squint and a steelier voice, but no amount of aplomb—or volume—can rescue lines like “the underground blondes will give her 13 bites to the palms of her hands” and “the sexy Easter announcing Maria!”

It is possible that the fault here lies with the supertitles, by director Tomer Zvulun, but it can’t be counted out that Maria de Buenos Aires might simply be an incoherent piece of theater.

Of course, this is not necessarily a bad thing—there are far worse ways to pass an evening than to spend it listening to slightly surrealistic tango music performed by charismatic singers and dancers, in a venue where you can sit and drink while you watch.

But Maria de Buenos Aires is not just an evening of theater; it is the opening of the New York City Opera’s season. On Monday, before the band tuned up, while those of us at tables flagged down waiters and the less lucky settled in for two hours of standing, NYCO’s General Director took the stage and announced that as New Yorkers are 30% Spanish speaking, and as the NYCO remains the people’s opera, works like Maria De Buenos Aires represent an important facet of the company’s new identity: opera for the people, performed by the people’s opera, in the people’s language.

This is a noble sentiment, and an exciting goal for the rebirth of a company I am eager to see re-find its footing, but I’m not convinced that an outré piece like Maria De Buenos Aires, while enjoyable enough and undeniably in Spanish, is in line with a mission that purports to be above all accessible and relatable to the people of New York.

The NYCO season continues from here with two works for its other big initiative, LGBT themed operas: Laura Kaminsky’s As One and a new opera from Iain Bell and Mark Campbell called Stonewall. It is my sincere hope that these works will feel more like they not only know who they hope to speak to but like they truly have something to say.