How do we celebrate a long career in opera, particularly one as illustrious as Plácido Domingo's? 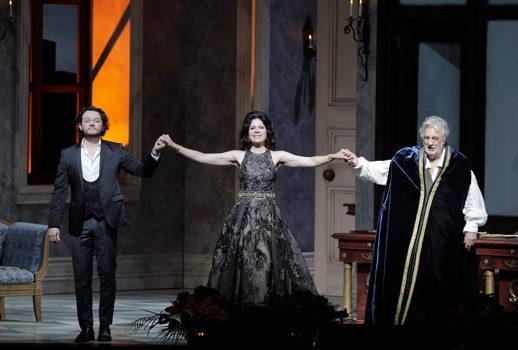 How do we celebrate a long career in opera, particularly one as illustrious as Plácido Domingo‘s?

To my mind, there’s no more fitting tribute than a performance on stage, and that’s what San Francisco Opera did on Sunday (10/21). Although the sold-out concert (with extremely full standing room) was simply billed “Plácido Domingo in Concert,” this was truly a 50th year career celebration, akin to the star-studded LA Opera concert last year.

Domingo made house debut at War Memorial Opera House in 1969, singing Rodolfo from Puccini’s La Bohème. Over the next 40 years, he portrayed 14 different leading tenors, all in French and Italian repertoire, the final one being the title role of Alfano’s Cyrano de Bergerac in 2010. Looking back, I found that interestingly we never heard his famed Wagner portrayals, nor the roles he took on in the baritone repertoire from recent years.

Unlike the LA Opera Concert, the concert yesterday really took the focus on two things that are close to Domingo’s heart; Verdi’s paternal roles and Spanish zarzuelas. Aided amply by his protégés Puerto Rican soprano Ana María Martínez, Mexican tenor Arturo Chacón-Cruz and Spanish conductor Jordi Bernàcer, the generous concert (run for more than two and a half hours) and its euphoric reception by the audience truly showed how much Domingo’s presence was missed by San Franciscans, a fact that he himself acknowledged on stage.

The first part of the concert was dedicated to two Verdi roles that have been Domingo’s calling cards in recent years: Giorgio Germont and Simon Boccanegra. After a slow traversal of La Traviata’s prelude, the curtain opened for a fully-staged Act 2 Scene 1 from the same opera. Borrowing Robert Innes Hopkins’ set from Act 2 of the currently playing Tosca, Morgan Robinson directed the scene simply and clutter-free, putting the action squarely on the singing.

After acclaimed performances as Zurga in Salzburg (his 150th role) and Rodrigo in Don Carloin LA, the choice of opening with this scene was a smart and logical decision, as I found Domingo in fresh and relaxed voice as Giorgio Germont, imbued with natural acting as the weary father.

In a role that he could probably sing in his sleep (this season alone, he will sing the role in New York, Milan, London, Muscat and Munich), he packed a lifetime of experience into a performance far from routine. If anything, it was eloquent and heartfelt.

I think it helped that Giorgio Germont role had a rather high tessitura for a baritone, so the role and the characterization fits him like a glove. It was astonishing how much power his voice has even at 77 years of age. The audience greeted his entrance passionately, almost interrupting the flow.

Joining him on stage was Martínez as Violetta and Chacón-Cruz as Alfredo. Unfortunately, I felt Martínez rather underpowered in her delivery although she sang earnestly. Chacón-Cruz sounded a bit grainy in the beginning, but he gained power quickly. It was obvious that Domingo had good rapport with both Martínez and Chacón-Cruz, and this long scene from La Traviatahighlighted that fact nicely.

Things were much better during the next offering, a section from Act 2 of Simon Boccanegra, particularly with regards to Martínez. She felt more alive and less strained here. Using the same set as the Traviata scene, once again the direction was focused towards singing. 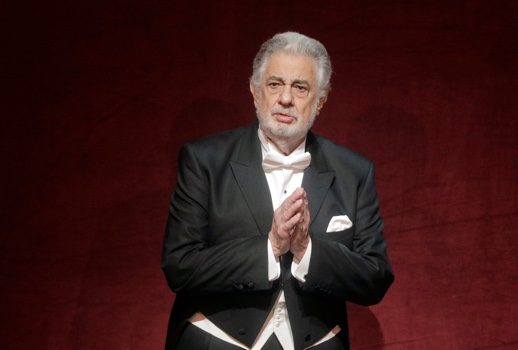 Simple costume changes for Domingo as the Doge really helped to differentiate the performance, and it was a truly gripping performance from the trio. If anything, I noticed that Domingo struggled a bit during the final trio (“Perdon, Amelia … Indomito”) as it lay pretty low in his voice. Acting wise, the trio ended up with group hug that was truly heartwarming.

After the break, came the highlight of the concert (at least to me), as the audience was transported to sunny Madrid for a lovely series of Zarzuela songs. This was evident starting from the moment Bernàcer led the San Francisco Opera Orchestra in rousing rendition of Giménez’s Intermediofrom La Boda de Luis Alonso, a sharply detailed reading with prominent castanets that truly set the mood.

This traversal to the wonderful world of zarzuela made a truly welcome, enlightening even, presence in War Memorial, particularly since the last time we heard such songs was during Domingo and Pilar Lorengar’s concert 34 years ago!

For this part of the concert, the stage was simply the gold-pleated red curtain drape borrowed from Roberto Devereux’s set. It turned out to be an effective set, as the spotlight was right on the singers performing in front of it.

All three singers truly stepped up their game for the second half, while evidently having so much fun performing the songs. It was obvious that the three singers have zarzuelas running in their blood. After all, both Martínez and Chacón-Cruz won Zarzuela Prizes at Operalia, the renowned vocal competition for young singers that Domingo created and continues to oversee. (Our current Tosca, Carmen Giannattasio, was another Operalia winner.)

Domingo himself tirelessly championed zarzuelas over the years, and later next year he, with all three of his protégés from this concert, will mount Penella’s El gato montés at LA Opera.

The festivities started with “Quiero desterrar” from Soutullo and Vert’s La del Soto del Parral, a love song from husband to his wife. Domingo popularized this song in his concerts, and here he presented it with so much emotion, obviously thinking of his wife during the song.

Martínez followed with “De España vengo” from Luna’s El Niño Judío, performed with sassiness and style. She also looked like a million bucks in white mermaid gown embroidered with red roses with matching shawl. Chacón-Cruz upped the lyrical content in “La roca fría del calvario” from Serrano’s La Dolorosa, before Domingo, always a generous one, performed additional off-program song, long associated with his career, the famous “No puedo ser!” from Sorozábal’s La Taberna del Puerto, and brought the audience to its feet.

After a brief Farruca from Falla’s The Three-Cornered Hat, the concert continued with a selection of Torroba’s Luisa Fernanda, arguably the last great romantic Zarzuela. Domingo has been a long champion for this zarzuela; his 2006 performance at Teatro Real is available on video, and he performed it in 2014 with Bernàcer at Palau de les Arts Reina Sofía.

In this concert, Domingo assumed the role Vidal (the duet “En mi tierra extremeña” with Martínez as Luisa and the romanza “Luche la fe por el triunfo”) and Chacón-Cruz as the reckless Javier (“De este apacible rincón de Madrid”). They performed this selection so well in their corresponding roles that I hoped SF Opera General Manager Matthew Shilvockwould be persuaded to present this great zarzuela with these principals and conductor sometime soon.

Four encores were added to this packed concert, and they closed the show with a bang, starting with Chacón-Cruz’s “Te quiero, Morena”, followed by a spirited performance of “Amor, vida de mi vida” from Domingo whose delivery in the darker colors of his voice today gave it more anguish than this reviewer recalls hearing it from him, and finally, Martínez raised the roof with gorgeous take on “Lamento de María.”

A cabaret-style singalong version of “Bésame mucho” (yes, with mics) concluded a glorious afternoon at War Memorial, and a fitting anniversary celebration for one of the opera legends, or (should we say) opera superheroes.