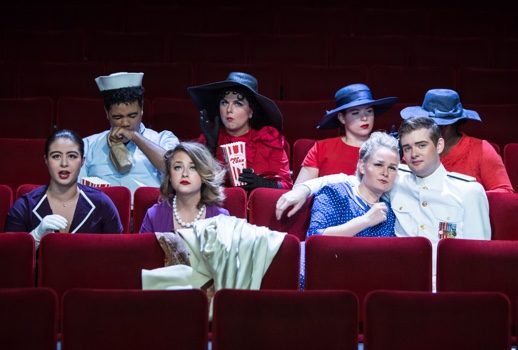 Never was this clearer than in Chas Rader-Shieber’s mash-up double bill with the umbrella title Trouble in Paradise, where the director paired Tahiti intriguingly but ultimately pointlessly with Purcell’s Dido and Aeneas in a pretentious conflation that was simultaneously over-conceptualized and insufficiently thought through.

I had expected Tahiti to be an easy fit for promising young opera singers—in particular, Curtis’s rising star mezzo, Siena Licht Miller, who played Dinah, the wife in a couple whose souring marriage is Bernstein’s subject (he wrote both music and libretto).

Instead, the cast struggled with the low-lying tessitura and the need for a punchy, text-forward delivery.

This was instantly evident from the jazz vocal trio at the beginning, whose bebop delivery felt page-bound rather than improvisatory. All three singers—soprano Tiffany Townsend, tenor Colin Aikins, and baritone Dennis Chmelensky—have fine voices, but they didn’t sound entirely comfortable. (Soprano Townsend, who has some measure of the style and a lot of stage charm, transposed up whole phrases by an octave.)

Miller certainly cut a glamorous figure, styled here as if for a Douglas Sirk melodrama (costumes were good, though the program lists no designer). She’s a committed artist with an easy command of the stage. But the words were often unclear and she lacked the oomph for key low phrases in her big aria, “What a Movie!”

(Sidebar: my fantasy wish is that around the time of the Broadway premiere in 1959, there was a crossover studio recording of Trouble in Tahiti, starring Sarah Vaughan and Billy Eckstine as Dinah and Sam, and featuring a jazz trio of Nat King Cole, Mel Tormé, and Anita O’Day.)

Both Miller and baritone Patrick Wilhelm (a stiff Sam whose impressive baritone was below best form) were also disadvantaged by Shieber’s direction in a kind of stations of the cross staging, which moved them from one vignette setting (kitchen, analyst’s couch, Sam’s office, etc.) to another in a messy assemblage of furniture that remained onstage throughout Tahiti.

But if Curtis’ production failed to ideally showcase Trouble in Tahiti, and words were often lost, I’m not sure it’s much of a tragedy. Time has not been kind to this one-act opera, a fatuous piece of Bernstein finger-wagging to which he brings no psychological insight. (Its sequel, the ghastly, homophobic A Quiet Place is far worse.)

A few pieces are fizzy and fun, notably “What a Movie!” aria, a favorite concert selection. (Though so often singers get it wrong interpretively—Dinah says she hates the movie she’s seen, but clearly she’s in love with the fantasy it represents. It’s at least as much sad as comedic.) But the unmistakable takeaway is that Trouble in Tahiti is far more effective when heard through a few good bits than in its entirety.

But it wasn’t over yet. For Dido and Aeneas, Shieber unveiled his coup-de-théâtre, which involved moving the audience to seats on the stage, while the second opera was performed in the house.

I felt like the director was nudging me in my side, whispering, “It’s a change in perspective—get it??” Trust me, I got it. I would also have gotten it if I stayed in my seat.

Instead, this gambit killed any sense of momentum, and meant that Dido would be staged with maximum awkwardness, the characters singing from within confining rows of seats.

As the audience struggled to climb onto the stage and find their way to new location, the Tahiti trio struggled valiantly to cover the shift by singing Gershwin songs. The bright spot here was soprano Ziyi Dai, whose lovely, pearly performance of “The Man I Love” was the afternoon’s musical highlight. (Dai also sang very beautifully as Belinda.)

For Dido, the look suggested World War II, with groups of sailors roaming around the stage. (I assume this was Shieber’s wink to On the Town, but like so much of the production, it didn’t add up.) It was musically a middle-of-the-road reading, though conductor Lisa Keller and her musical ensembled coped extremely well with the shifting sonic landscapes needed for these very different works.

Wilhelm was better as Aeneas than as Sam, though still not in best form. Emily Damasco had dramatic fun as the Sorceress, but made little impression vocally; her attendant witches, Olivia Smith and Lindsey Reynolds, were excellent.

Miller was a striking Dido, making much of “When I Am Laid in Earth,” despite the particular challenge of having her recit and aria separated by Dai’s vocalizing a wordless reprise of “The Man I Love.” (Don’t ask.)

The final chorus, “With Drooping Wings,” was omitted here. But if Dido’s aria ended the afternoon abruptly, the lingering WTF? questions continue.