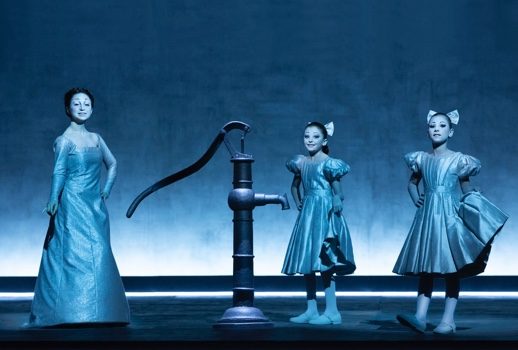 Charles Dickens, who had his share of opinions about ghosts, observed of the occasion of a 1846 visit to Parma the monumental and austerely majestic Teatro Farnese, “if ever Ghosts act plays, they act them on this ghostly stage.” And so it came to pass that America’s longest-standing theatrical lightning rod, Robert Wilson, there premiered his ethereal, time-collapsing production of Le trouvère this weekend as part of the Teatro Regio di Parma’s sprawling annual Festival Verdi.

It was almost inevitable that the matter became something of a revisionist history lesson, a scored parade of opposites. Verdi conceded to requests by the Opéra after a successful premiere of Il trovatore (in Italian) at the Théâtre-Italien to produce a version that would suit Parisian audiences.

This meant addition of a ballet during Act III as well as a suggestive translation of the viscerally fakakta libretto into French undertaken by Émilien Pacini and some tweaks to the music here and there (gone is “Tu vedrai” amongst other small revisions).

Wilson’s reframing of the story (which used David Lawton’s new critical edition of the score), visually, looks exactly like you’d expect it to (lights by Wilson himself! hard surfaces! no set! black, blocky costumes by Julie Van Leliwa! heavy makeup! the color blue!) and moves about the same.

But such a cool distancing of the headstrong opera’s elements from each other (Verdi’s text-painting is never gesturally or visually obeyed, the singers never make eye contact, and the limited motion is spurred by the emotional declamations in the libretto instead of the physical ones) rearranges the semi-cohesive elements of the opera and gives it a dramatic clarity that is drawn in and by contrasts.

The libretto’s graphic terror has a haunting immediacy in its static narration and the humanoid characters’ emotional motivations are given a transparent visual language (“acting” is removed from the picture) through gesture that becomes verified and restated as Wilson blends time onstage, mingling silent characters, young and old, with the protagonists that serve as unknowing reminders to the audience of the drama’s far- and long-reaching impact.

The Act III ballet, for example, finds Verdi’s wonderfully innovative and self-referential suite of dances accompanied by a multi-generational boxing match instead of rip-roarin’ gypsies en pointe. It not only separates the score from implied physical motion, but underscores the production’s point that the human experience is a one-size-fits-all past, present, and future. Our present actions have repercussions on both ends and Trouvère shows that human experience at its ugliest and most chaotic.

In this mode, Azucena assumes a greater importance as a sort of generational conduit amongst the characters, especially as performed by Nino Surguladze, whose inky mezzo unrolled the vengeful gypsy’s lines with crackling generosity. 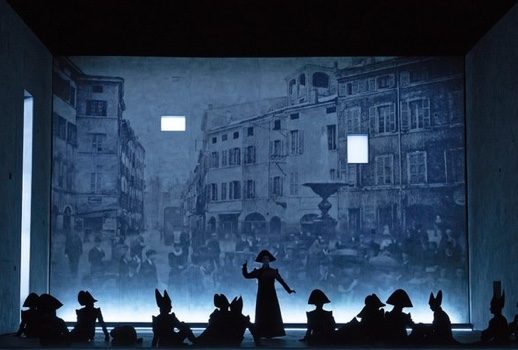 With a refreshing immediacy, incisiveness of both gesture and voice, and thread-of-voice piannissimi as attentively executed as trumpeting high notes, the 40-year old Surguladze gave Azucena a vivid complexity and tangible conflict. If her colleagues were similarly capable, they lacked her spark.

Giuseppe Gipali’s rather diminutive Manrique was augmented by a steady if serviceable tenor and high notes of surprising security and sheen that found their release in an earthy “Supplice infame,” (“Di quella pira”).

His Léonore was the statuesque and clarion-voiced Roberta Mantegna, though her flexible instrument was better-suited to the musical line than it was to the texty French translation.  “La nuit calme et sereine” (“Tacea la notte”) flowed measuredly until words started to tumble out of her mouth during the cabaletta and her Act IV scena proved heavier on filigree than on much actual virtuosity.

They were all lorded over by Franco Vassallo’s imposing and generously emotive Comte de Luna whose contoured if unsympathetic baritone brought “Son regard, son doux sourire” (“Il balen”) to a towering finish.

The Orchestra and Chorus of the Teatro Comunale di Bologna sounded well-prepared by conductor Roberto Abbado, though both the chorus’s words (and those of the principals, for that matter) and the orchestra’s sound were obscured beyond a general impression by the Farnese’s cavernous acoustics. The Orchesta’s occasional fortissimo outbursts here came across as a glittering cascade of sound.

Robert Wilson productions will never be considered standards unless they originate with the opera. This was confirmed by the cool reception afforded by the famously opinionated Parmiggiani. And Wilson’s production does, as one audience member furiously noted at intermission, rather roughly remove the opera’s Romantic backbone to such an extent that one senses that it might have rather significantly stifled the interpretive capabilities of some of the singers.

But if you’re coming to Trovatore to kiss the feet of the “four greatest singers in the world,” then you probably don’t have much of an idea of what opera’s about, anyways.

When Manrique comes to rescue Léonore from the convent, she greets him with “are you descended from heaven, or am I in heaven with you?” Wilson founds his production at that temporal crossroads and for 3 ½ hours, we’re right there, wherever there is, with him.