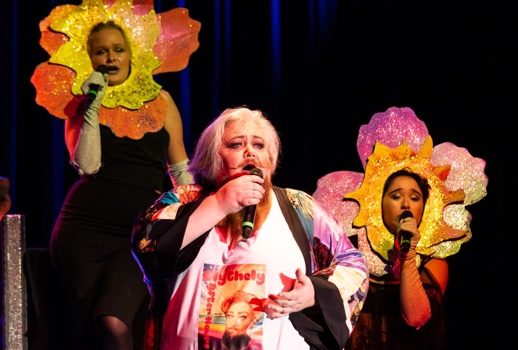 So Stephanie Blythe announced early into Queens of the Night Part I, responding to the shout-out of an adoring fan. Blythe said it with a twinkle but also a sense of point, and it would prove to be significant factor for the next 95 minutes or so.

First, though, a word about the event, which is  conceived as a three installment arc, pairing the great mezzo soprano with Dito van Riegersberg, a Philly icon who performs in a variety of personae but is best known as his drag alter-ego, Martha Graham Cracker.

Last year, an Opera Philadelphia event that brought the two together was a sellout hit, so the pairing returns in this somewhat more formalized sequence, though formal would be the wrong word to describe something so freewheeling and improvised. (All three evenings move us back to the TLA nightclub.)

There is, though, the thread of a plot that brings together “Blythely Oratonio,” (SB in a semi-drag tenorial persona) with MGC, who is dubbed the world’s tallest and hairiest drag queen. In the two parts of Queens of Night, we have first Blythely and then Martha hosting, as we see each prepping for their date with the other. Presumably, the grand finale—Dito and Aeneas, on Friday—will put the two together and focus on that date, and perhaps also its aftermath and the future of their relationship.

More than the plot, what’s notable here are some overarching themes that feel very much a part of not only Martha’s world, but also writer/director John Jarboe’s. He’s another beloved Philadelphia figure, a performer and deviser, known for working both in and out of drag.

As you’ve probably already guessed, a celebration of gender in all its glorious ambiguity is a central focus, as is sexual and personal positivity. Also, the private lives of artists, which here become a kind of jam session.

I loved the energy and excitement of Queens, though its lack of structure and deliberate sloppiness wore down my patience as it went on.  It’s best appreciated as a public after-party for O2018 Festival devotees, who got to experience some favorite artists with their hair down (sometimes literally), and can appreciate the many in-jokes.

A few specifics of what went down… 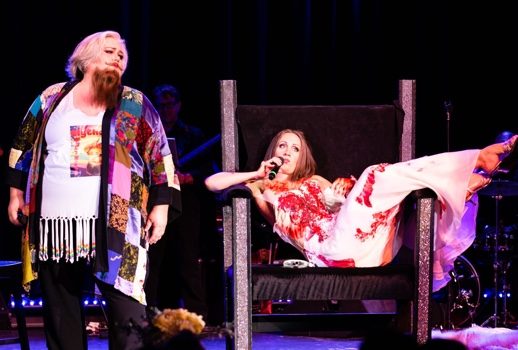 This was Stephanie-as-Blythely’s evening, with Martha appearing only briefly via video (though Dito was in attendance near the bar, and beamed throughout the show).

It was for sure a different Blythe than her opera fans know, and it manifested itself dramatically in both her singing and her relationship with the audience.

The show began with Blythe seen only from the back in opera warrior drag, singing the whole of “Nessun dorma.” Pushing her powerful chest voice even into the aria’s highest reaches, the message was clear—we’d be hearing Blythe in what I think of as Merman mode, where she’s gloriously at ease.

In repertoire that ranged from “Jessie’s Girl” to “We Are the Champions” to “Perhaps Love” (a duet with guest star Justin Vivian Bond), Blythe demonstrated complete mastery of the pop idiom—so much so that I fantasized about any number of possible future roles. How about Mama Morton in Chicago? (And by the way, we could all think of current first-rank tenors whose versions of “Nessun dorma” are less idiomatic and musically satisfying than hers.)

But amazing as her vocal transformation was, even more startling was Blythe’s easy banter with the audience. I’ve always found her a committed, intelligent actor in opera roles, but that’s a far cry from handling the conversational, often sassy by-play with the audience, which she did with the ease of an old pro. Who knew the Blythe had all the tough savvy of Lenny Bruce, and some of the vocabulary, too?

Soprano Brenda Rae also appeared as a special guest, costumed in a bloodied white dress—it was her night off from appearances as O18’s Lucia di Lammermoor, which noted several times. Over her gown Rae casually draped a fur chubby, and the net effect suggested a particularly brutal encounter on Real Housewives of New Jersey. In addition to sparring gamely with Blythe, Rae played the piano and sang in a pretty spot-on imitation of Tori Amos.

Installment #2 belonged to Martha (though Blythe was a visibly present guest and briefly appeared via video), who started at a disadvantage. Inevitably, the second time around the idea had lost some luster. Blythe’s tour-de-force on Monday truly proved to be the proverbial tough act to follow.

It didn’t help that Martha has little connection to the world of opera. It’s a good voice in the right material—which here included Barry Manilow’s “Weekend in New England,” a compelling  performance that nicely tread a fine line between mawkishness and sincerity—but not capable of the kind of astonishing hat trick that Blythe pulled off in her classical-to-pop style transformation.

Of course, Martha should have the upper hand in terms of experience and comfort—nightclubs are her natural habitat, and she knows how to work an audience like nobody’s business. (By the way, costuming on this evening was pure Liza: a sequin bowl-neck shift falling off the shoulders, with long elegant legs fully visible, and a mop of dark hair cut in a sloppy bob.)

But here, even Martha’s veteran status proved a liability in a show where too much of the material was already familiar and only gently reworked for the occasion.

Some of it was masterfully done, and there were a few good jokes. Patricia Racette was the guest star, throwing herself into the fun and delivering a game rendition of “Milord.” Dancer Virgil Gadson (another celebrity guest) contributed some spectacular moves.

Still, for me the two hour evening was double the length it should have been. A few times, Martha sang some operatic phrases—in her own pop baritone, but still it was nice to hear, and added a welcome sense of connection to the previous evening. I wish there had been more of that—maybe “Vissi d’arte,” which Martha began promisingly, could be heard in its entirety?

Or perhaps we’ll get this on Friday, when Dito and Aeneas, the final chapter of the trilogy, takes the stage. I’ll report back later…