For opening night of the new LA Opera season Placido Domingo decided to return to one of his best Verdi showcases, Don Carlo, only this time as the baritone, Rodrigo the Marquis di Posa, instead of the title character. 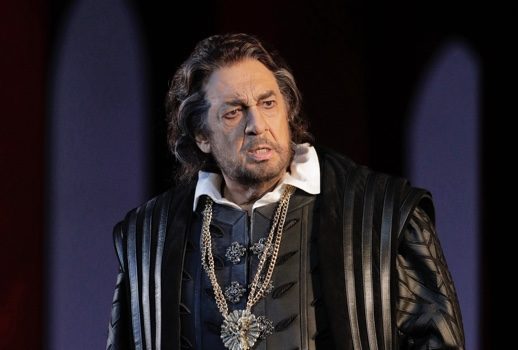 Opera for me is the very definition of escapism. The reasons are too obvious to list and, most especially, in the hideously tumultuous political times we find ourselves in. So last night at the Dorothy Chandler Pavilion it was a relief to cast your mind back in history to a simpler time: the Spanish Inquisition.

Since our Grande Signeur, General Director, and Star has migrated his repertory south of the ledger lines for comfort we’ve been the guinea pigs for many a role debut. Some more successful than others. For opening night of the new LA Opera season Placido Domingo decided to return to one of his best Verdi showcases, Don Carlo, only this time as the baritone, Rodrigo the Marquis di Posa, instead of the title character.

Mind you this isn’t the first time our Baritonissimo has contrived to have the LA Opera mount Giuseppe Verdi’s drama surrounding the Spanish court of Philip II at his behest. Back in our 1989/90 Season we were excited at the prospect of forthcoming performances of Tchaikovsky’s Queen of Spades.

Our then tenor was announced for his first Hermann and Mirella Freni was set to debut with the company as Lisa.  I recall rather late in the game, mere months even,  it became known that learning the role of Pyotr Ilyich’s hapless gambler had become too much of a challenge with a busy engagement calendar. So doing what any other company would do they announced an entire change of opera to Verdi’s Don Carlo.

Sadly Ms. Freni became unavailable (seeing her renowned Elisabetta would have been no small consolation) and suddenly we had a near total Russian cast for an Italian opera.That evening’s baritone, Vladimir Chernov in his U.S. debut, apparently liked what he saw of Los Angeles since he now teaches voice at UCLA and has stewarded a number of fine young singers.

Opening night at LA Opera is always a motley affair with the ladies of the old guard stuffing the fur closet of the Founders Room while patchouli-dipped hipsters congregate downstairs in the lobby in their purpose ripped jeans and eyebrow piercings. I am pretty certain everyone enjoyed themselves because there was a lot to enjoy.

The late John Gunter’s sets, which debuted here in 2006, provide shifting angles of endless colonnades, perfect for palace intrigue but perhaps a little awkward in the great Auto-de-fé as everyone is pushed to the front of the stage. The reason for the upper half of the set being covered with bloodied Caravaggios eludes me, however. 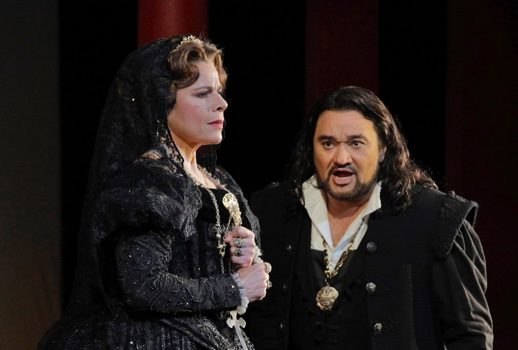 Still it provided a menacing atmosphere and the costumes of Tim Goodchild enhanced the mood while presenting the chorus as decorative backdrop. I didn’t see Ian Judge’s production when it was new and the playbook has now been handed off to Luisa Muller who made certain that no one bumped into each other.

However there was a great deal of singer’s pacing and returning for “one more thought” during their extended scenas which seemed more often than not like they were modeling their costumes more than inhabiting their character.

Ramon Vargas as the Infante enjoyed a successful, and long awaited, return to LA Opera after his Werther here in 20 years ago (!) The hallmarks of his craft remain the same: a beautiful middleweight Verdi tenor with an elegant delivery. His phrasing remains generous as are his emotions and as the thwarted son of his overbearing father he was more desperate than pitiable. If it took until the Garden scene in Act II for the top of his voice to start phonating regularly it was little price to pay for some transcendent singing.

We had two singers from the most recent Met Live in HD transmission of 2010, the Princess Eboli of Anna Smirnova and Ferruccio Furlanetto as Philip II.

Ms. Smirnova is a powerhouse for sure but I think Eboli requires some subtlety and it was in short supply while our mezzo showboated everything above a F-natural.  I’m happy to report she sings her lines, and most especially the upper reaches of this high role, with absolute security; nay fearlessness which is a rare thing. Yes she was often over brash but she slowed down for surprisingly varied, “O don fatale.” She was also tremendously affecting during her confession to Elisabetta before she’s sent into exile.

This was doubly difficult since she’s given an unforgivably comic hairdo that makes her resemble the Red Queen from Alice’s Wonderland. I only wish that the staging had been a little more conscientious about putting a proclamation in front of her announcing Carlo’s doom rather than have her divine it suddenly, like Cassandre, in a vision. 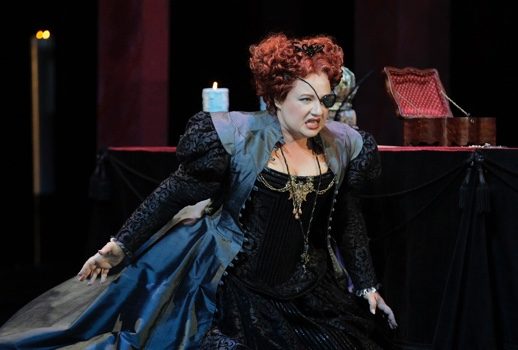 Furlanetto, at nearly 70 years old, is a practiced Philip and with his height and hauter he made a monster of the forlorn ruler. His torment of not knowing the hearts and minds of those around him was clearly the source of his anguish. He lashed out at Elisabetta in the scene in his study with an animal cruelty and a shockingly harsh tone. For once you understood the Queen’s sudden faint. His “Ella giammai m’amo” started with a dreamy despair and just deepened as layer upon layer of misery was peeled away.

He met his match in the Grand Inquisitor of Morris Robinson who once again astounded with sheer opulence of tone. This voice grows every time I hear it and last night he was an absolute deluge and made his every utterance riveting. We’re lucky to have him as a regular company member.

Liv Redpath is in such high demand (and we knew this would happen) that she was also singing the soprano solo in the Mozart Requiem across the street at Disney Hall with the LA Master Chorale. She proved a dazzling (and discreetly mic’d) Celestial Voice. Soloman Howard gave his formidable talents the the Friar who opens and closes the opera.

Domingo’s Marquis di Posa found him in good form and even a good fit for his gifts. He was firm and ardent of tone perhaps even more so than last season’s Nabucco. Posa sits higher than Verdi’s “father” roles and he lavished his remaining gifts on it to the audience’s absolute delight.

He didn’t attempt the party trick of joining the two phrases in his death aria a la Cappuccilli and frankly I didn’t expect it. But done up in Prince Valiant wig and with his beard darkened you’d have no idea you were listening to a 77 year old man. I want to see the portrait in his attic.

The evening really belonged to our Elisabetta di Valois, Ana Maria Martinez. Her’s isn’t the big spinto Verdi sound but she meets her objectives with style and finesse rather than attempting to over power the listener with volume. Her voice draws you in. I’m not certain when Ms.Martinez developed one of those pinpoint pianissimo, because it’s not something I had heard in her vocal arsenal before, but she deployed them throughout the evening. 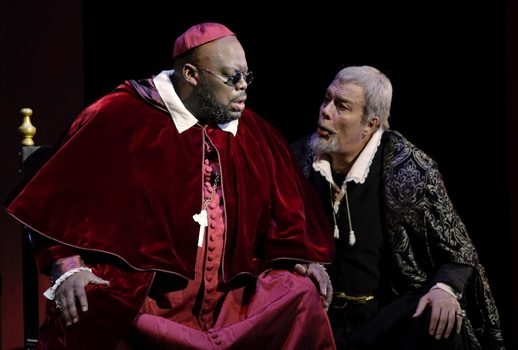 She was given both verses of her farewell to her lady-in-waiting and on each ascent to the climactic phrase dazzled with the beauty and clarity of the top most notes. Throughout the final duet with Carlo too she lavished us with ppp’s that would have had Montserrat Caballé gnashing her teeth.

She blazed during the first interview with Carlo where she admonishes him against his love and proved a equal consort to her King when she was betrayed in the last act. Her command of phrase during ‘Tu che le vanita” was magnificent and it was justly the cornerstone of her performance. She also moved beautifully in her costumes and made a very tender portrait of the young queen, an outsider in a poisoned court, forced into a loveless marriage.

James Conlon led a majestic reading of this score with its dark tinta. Once the horn’s got the opening prelude out of the way no one set a foot wrong. Yes, they opted for the Italian 4-Act instead of the French 5, which frankly I’d prefer for once. You keep hearing the music from Fountainbleu throughout the score but it doesn’t relate to anything.

Conlon kept propulsion in a piece that can have more than its share of longeurs in the wrong hands. That said they did stop for applause after Posa’s death aria (blah) which made starting back up for the insurrection awkward and was one of very few missteps.

The maestro brought all the color and vitality out of the score he could and the double basses ripped into the Grand Inquisitor’s theme to the point where you could hear the strings rattle. It lacked the restrained dignity of some other Verdian’s I could name but it was theatrical, terrifying, and delicious.

Score points for Maestro’s Conlon and Domingo to take a moment after the curtain calls to say hello to the outdoor audiences watching the show live from the Santa Monica Pier and in Sylmar’s El Cariso Park. As the two men stood there, holding inflatable beach toys, I thought to myself, “Only in LA”. You have to hand it to them that they’re up for it. Plus that’s how DVD’s are made.  A most excellent beginning and five performances remain.