Those who want a rethought Lucia to allow the heroine more sense of agency will be especially confounded at Laurent Pelly’s reading. 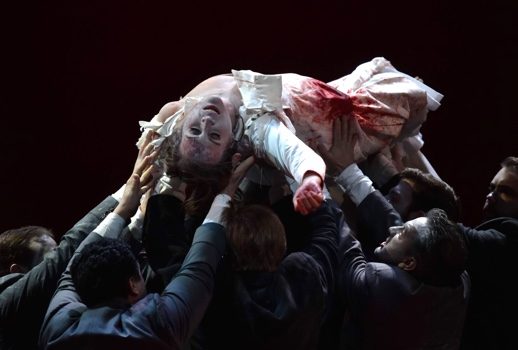 If only Donizetti’s Lucia di Lammermoor, a setting of Walter Scott’s gloomy novel in which the heroine is traded like a piece of merchandise in a battle of brutal family politics, felt like an historical curiosity. Alas, we see daily headlines that confirm its relevance.

Sure enough, in recent years a number of opera companies and prominent directors including Katie Mitchell and David Alden have been remounting and rethinking Lucia. Opera Philadelphia joins the group with a production by director Laurent Pelly, which has its first stand as part of O18 before moving on to other houses.

I’ve been a great admirer of some Pelly productions, notably his enchanting La Belle Hélène, but his cheeky wit feels like an odd fit for this work. What would Pelly bring to the party, I wondered?

About a few things I’m fairly certain. We’re meant to see much of the opera through Lucia’s perspective. This vision of Scotland could hardly be grayer or more bleak, and although there is a momentary glimpse of Victorian charm in the form of an idealized mini-manor house seen in the distance, it quickly disappears into the mists…

Shortly after, the house is essentially consumed by a strange constructivist structure that increasingly engulfs the stage. (If I’m correct that these stage pictures are Lucia’s psyche at work, I’m struck by her ability to imagine the work of Mies van der Rohe nearly a hundred years before he arrived on the scene.)

If the images are visually confounding, the interpretive ideas are more troubling still. From the very start, Lucia is jittery and childlike; over the course of the opera, it only gets worse.

Those who want a rethought Lucia to allow the heroine more sense of agency will be especially confounded at Pelly’s reading (which, by the way, soprano Brenda Rae in the title role executes unstintingly). Frankly, I think Lucia embodies the lack of agency women faced in the early 19th Century—in fact, that’s rather the point.

Still, Pelly takes this to extremes that deprive the character of any sense of development or growth. Effective as Rae is in playing the role, a moment or two of quiet dignity would not be unwelcome. 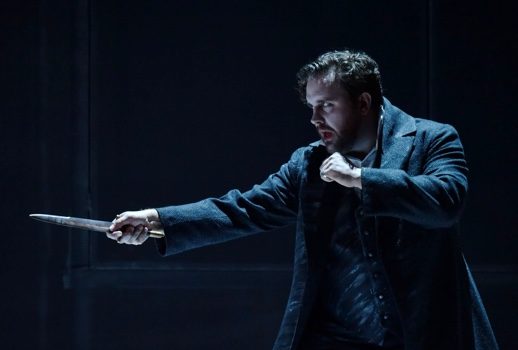 Pelly does make some intriguing points. Rather slyly, he finds some moments of dark humor, as in the wedding celebration, which looks about as joyful as Lincoln’s funeral cortege. The remaining characters are played more conventionally to type.

In any case, I rather think Pelly is more interested in direction as a pictorial or illustrative idea than in detailed thinking about character and motivation. The net effect is a puzzling Lucia in which the title character is more off-putting than sympathetic.

Musically, things were on a surer footing. Corrado Rovaris brought his accustomed brio to the podium, though he used considerable rubato which was especially surprising in several cabalettas. (It did, however, seem all of a piece with Pelly’s dramatic conception, which downplayed the shifts of moods that often accompany transitions from cavatinas into cabalettas.)

Brenda Rae’s soprano is at its best in the upper register. Her high filigree work has an exquisite airiness to it, and she also has fine command of bel canto shapes. This served her well in much of the mad scene, which as it should be was a tour de force. But there’s not much Mediterranean warmth in the sound, and the more lyric moments didn’t always have the weight they should.

For me, this was the performance of the day, though there was excellent supporting work by bass Christian Van Horn (as Raimondo), baritone Troy Cook (Enrico), and mezzo Hannah Ludwig (Alisa). Her rich and rounded sound confirmed the very positive impression she’s made while a student at the Academy of Vocal Arts. Chorus and orchestra deliver on a generally high level.

Perhaps the Pelly production will find a firmer footing in the future, as theatrical details settle in. Here in Philly, this Lucia has some strong musical elements and a few interesting dramatic ideas, but falls short of a cohesive evening of music theater.