Elle is other people

Soprano Patricia Racette is superb in La Voix Humaine, a work that she makes absolutely her own. 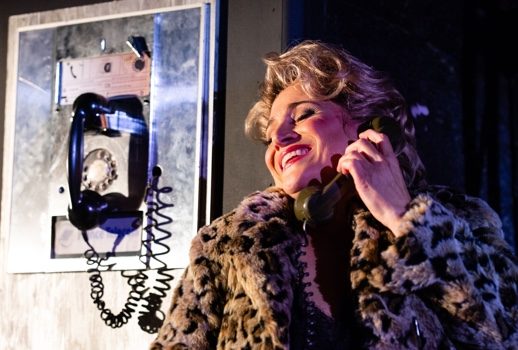 Not arch, but a triumph.

Let’s start in the middle, which in this case is the very best place to start. Soprano Patricia Racette is superb in La Voix Humaine, a work that she makes absolutely her own. Seen here, the rather dated piece feels like a great painting. (Also one that does not need or benefit from an ornate frame, but more on that later.)

Frankly, I’m a little surprised to find it as powerful as I did. I’ll admit that while I’m intrigued by the solo opera concept, I’ve never before warmed to Voix Humaine either musically or theatrically.

Poulenc provides a flawlessly idiomatic setting of Jean Cocteau’s perfervid text, but for me the score lacks the passionate beauty of his Dialogues des Carmelites or Gloria, not to mention the lilting boulevardier charm of his mélodies. Voix Humaine is heard here accompanied by an excellent solo pianist, Christopher Allen.

And then there’s the problem of basic idea—a women driven to suicidal frenzy whom we meet only on one end of a desperate phone call to her unseen lover.

I first sawVoix Humaine in the 1970s, where it featured Maralin Niska and the New York City Opera on tour in Los Angeles. Even then, it felt to me melodramatic and passé. It didn’t help that while Niska was a theatrical powerhouse for sure, she seemed more like a hardboiled film noir dame than a comme il faut French matron.

A sense of style is just one qualities Racette brings to Voix Humaine. With her mop of blonded hair in chic disarray, wearing a snazzy leopard coat, black slip dress, and elegant mules, all the while fussing with her handbag and its contents, Racette’s Elle is the essence of a mature Parisian woman of stature—think Simone Signoret or Danielle Darrieux.

More importantly, she’s in absolute command vocally and dramatically of every nuance. Voix Humaine is not a difficult score in terms of range or power, but it is certainly a marathon, and she makes it sound easy, her French fluently articulated and always comprehensible.

But it’s the acting that really grabs us, as Racette’s face registers every emotional response with heartbreaking clarity. (As acting teachers always say, it’s about re-acting, and tellingly she is as gripping to watch when she’s listening silently as when she’s singing.) 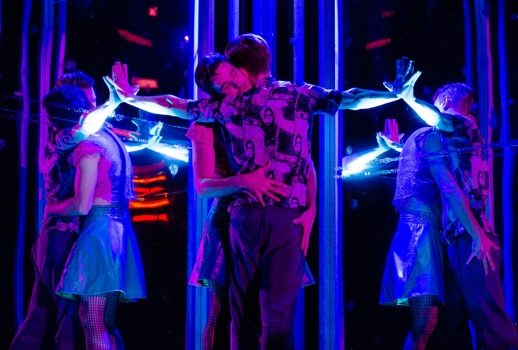 If only I could stop here… but there’s that fancy frame. At O18, Voix Humaine is part of an umbrella evening called Ne Quittez Pas, where it is reset in a nightclub (the actual venue is Philadelphia’s storied TLA, more often a home to indie pop music acts). While it feels a little odd to watch Racette moving from bar to stage, it does no real harm.

But there’s more. Bigger changes afoot here in director James Darrah’s “reimagining.” The time period is moved to 1979 or 1980, and Voix Humaine is preceded by a Prologue in which Racette does not appear.

Instead, the focus is on a small group of stoned-looking club denizens wandering around the night spot after hours, as they play various mind-games which become increasingly psychologically and sexually charged.

Or so they’re meant to. I found them growing steadily more tedious. To their credit, though, the performers (including pianist Allen, who deserves some kind of MVP award) commit fully to Darrah’s vision.

But why is the Prologue here? I had initially assumed it would provide some ironic distance from Voix Humaine, perhaps to counteract its now hard to tolerate view of women. Yet Darrah largely leaves the Poulenc work alone (it looks far more like the 1950s than the ‘70s, for example), for which we ultimately feel grateful.

The whole thing feels very high concept, but frankly just what that concept is remains opaque. My best is guess is that a number of things were tried out in rehearsal but ultimately failed to cohere, and what we see isn’t thoroughly worked-through.

Alas, the only thing Ne Quittez Pas adds to Voix Humaine is unnecessary extra time, and an intermission that dissipates energy rather than builds it. Still, it doesn’t spoil what is ultimately a stunning evening. Darrah’s self-conscious frame is merely arch. Happily, though, Racette provides the triumph.

For the second year in a row, Opera Philadelphia will boldly go where few if any companies have gone before. Between September 20th and 30, Festival 018 brings (by my count) 11 consecutive days and nine events that cover the broad spectrum of opera, and in some cases push the definition into new territory. There are traditional works (Lucia di Lammermoor) and world premieres (Sky on Swings by Lembit Beecher, whose evocative I Have No Stories to Tell You was a hit at last year’s O-Fest); famous names (including Frederica Von Stade, Stephanie Blythe, Marietta Simpson, and Patricia Racette) and young artists about to make their mark; and a mix of Philly venues, traditional and unexpected. You can find more information about the O Festival on their website.