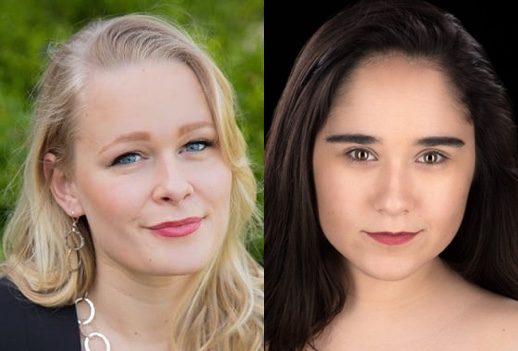 Fleshing out the staged opera offerings in O18 are two afternoon musicales in the intimate Field Concert Hall at Curtis, reinforcing the partnership that has become a prominent aspect of Opera Philadelphia’s outreach.

The programs, each an hour long and conceived as two parts of a whole, feature Curtis rising stars, soprano Ashley Marie Robillard and mezzo Siena Licht Miller. The singers have, in fact, already performed with Opera Philly, and both are exceptionally promising.

The first, called “Postcards from Europe,” is a collection of songs in several languages that together evoke a journey to Paris, Venice, Berlin, and London. (Next week comes the bookend piece, “Snapshots of America.”) The material is largely unhackneyed, often bracingly so. But even familiar pieces (including Rossini’s “Anzoleta dopo la regata,” a song I thought I’d never want to hear again) felt new-minted in this context.

Perhaps because these concerts are part of O18, the afternoon took on a kind of theatricality. Robillard and Miller shared the program and regularly related to each other and to their superb pianist, Grant Loehnig. There was much walking around on stage and shared glances; at one point, though Robillard stood by the piano, it was Miller, seated at the side of the stage, who sang a solo.

The net effect suggested a pair of delightfully enthusiastic traveling companions, seeking out European pleasures of all kinds—until refreshingly and without fuss, they slipped into a noticeably romantic relationship for the Contes d’Hoffmann Barcarolle. (“Our Hearts Were Young and Gay” seems a fitting phrase.)

If you judge your recitals by the “What Would Fischer-Dieskau Do?” yardstick of platform decorum, you’d likely disapprove of the breezy informality. I do not, and I enjoyed it thoroughly.

At this point, Robillard is the more finished artist. Her fresh-brook lyric soprano is forwardly placed, with  texts well projected in all languages (though her German is noticeably accented). She was at her very best in two “Wanderlieder” by Fanny Mendelssohn, where the youthful impetuousness and smile in her tone recalled the young Helen Donath.

Robillard was also terrific in some cabaret-inflected songs by Poulenc, and pulled off a real parlor trick with Lou Reed’s “Berlin,” where she channeled her inner Peggy Lee to dazzling effect.

Miller’s words aren’t always so clear, and her soprano-ish mezzo occasionally fails to etch a firm musical line, especially in brisk music, where the legato can get lost. But it’s a gorgeous instrument, its golden color reminiscent of Régine Crespin—and like Crespin, she suggests a glamorous, distinctly European sophistication that is remarkable in a young artist. (Last year, Miller bowled me over playing Baba in Curtis’s The Medium.)

And even if you can’t always make out the text, she’s alive to every dramatic nuance. Two selections in particular showcased her special qualities: Poulenc’s sensual “Hotel,” and Weill’s evocative “Berlin im Licht.”

Capping the trip were two charming duets in the form of drives around London – Bennett Scott’s “Take Me in a Taxi, Joe,” and Flanders and Swann’s madcap “A Transport of Delight.” It was a delightful afternoon, and I look forward to hearing more.

For the second year in a row, Opera Philadelphia will boldly go where few if any companies have gone before. Between September 20th and 30th, Festival 018 brings (by my count) 11 consecutive days and nine events that cover the broad spectrum of opera, and in some cases push the definition into new territory. There are traditional works (Lucia di Lammermoor) and world premieres (Sky on Swings by Lembit Beecher, whose evocative I Have No Stories to Tell You was a hit at last year’s O-Fest); famous names (including Frederica Von Stade, Stephanie Blythe, Marietta Simpson, and Patricia Racette) and young artists about to make their mark; and a mix of Philly venues, traditional and unexpected. You can find more information about the O Festival on their website.