Congas on the Roof

In Hatuey, composer Frank London and librettist Elise Thoron have created something that crosses boundaries from cabaret romance to flashback historical pageant to revolutionary thriller. 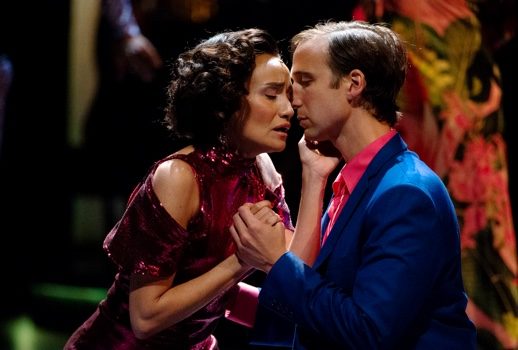 It’s something of a relief, on attending a brand new opera, to find that it’s not some wishy-washy attempt at a traditional piece—composers do traditional operas so badly these days—but something quirky and innovative, hitting vocal, stylistic and other bases in a manner that might be slighted by some as “pastiche.” If those bases are, in fact, fairly and entertainingly hit, it’s okay to call it an opera for want of a more precise term. Hasn’t opera, music-drama, always been a pastiche?

That was my thought on attending Hatuey: Memory of Fire on Sunday in New Jersey. The opera is having a week-long engagement at the Alexander Kasser Theater of Montclair State University, produced by the Music-Theatre Group and MSU’s Peak Performances. It’s the premiere of the full version; a shorter one was given last year in Havana, of all places, and in Havana it was given in Spanish of course. Opera crosses all boundaries. Hatuey continues at Montclair through next weekend.

Composer Frank London and librettist Elise Thoron have created something that crosses boundaries from cabaret romance to flashback historical pageant to revolutionary thriller, templates a modern audience can easily follow as we jump about from one to another, with discreet surtitles to keep us clued when the story changed languages. There was lots of singing, lots of dancing, and a tense storyline, and I was much entertained.

But the decision of the creators to cross boundaries grew naturally from its multiply-cultured source. Hatuey was the Taíno hero, a native of Hispaniola who was captured attempting to rouse Cuba against the Spanish conquistadors, refused Christianity (“If there are whites in heaven, I’d prefer to go to hell” the libretto phrases it) and was burned alive in 1512.

Hatuey is also a Cuban beer, which I only mention because the opera makes use of the fact: At a nervous moment, the naive hero is asked to remove some cases of Hatuey, unaware that they really contain guns for a revolt against the Cuban dictator. But the original Hatuey also turns up, in an opera-within-the-opera recounting his rebellion and defeat.

The most famous epic treatment of Hatuey until now has been a hundred-page poem about his uprising, written in 1931—in Yiddish, by Oscar Pinis, later Asher Penn, a refugee from Ukraine whose family were stuck in Cuba by American immigration quotas. He fell in love with Cuba and its story, but later became an editor of New York’s Yiddish newspapers.

Extended scenes from the poem, sung in the original Yiddish, are dramatized here and set to a heavily rhythmic score that subtly mingles Yiddish roots with tribal log drums and gently modern tonalities. The composer and his librettist wished to preserve the original cultural clash, to bring out the plight of the oppressed Jews vis-à-vis that of the oppressed Taíno.

Performing the ancient tale straight on and in Yiddish did not seem a realistic proposition. So the Taíno/Yiddish scenes are intercut with Spanish/English scenes from a fictionalized “life of the poet,” Oscar, who becomes involved, sympathetically and then romantically, in an uprising led by a sexy cabaret singer, Tinima (stage name “La India”) against Cuban dictator Gerardo Machado, a revolt centered about a Havana nightclub dubbed “El Dorado.”

Ironies galore here—at one point, in the Yiddish scenes, the Taíno melt down their gold and pour it in the sea, hoping the Spanish will then go away. The intercut stories have been directed with impressive clarity by Mary Birnbaum, with choreography in many, many styles by Maija Garcia. 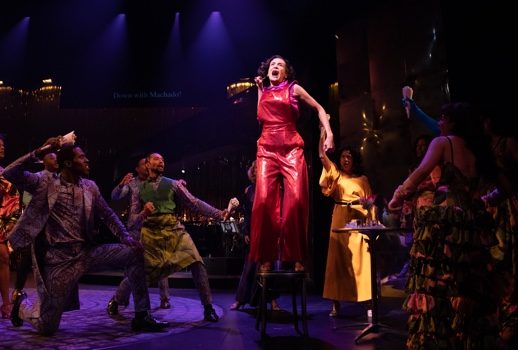 There are pastiche pop songs in both Cuban and American vintage, including Irving Berlin’s “I’ll See You In C-U-B-A,” to remind us of the “golden age” of this American playground, when liquor was illegal Stateside. Dance numbers suit both, as well as Taíno rituals. Oana Botez’s costumes mingle feathers and shells with tropical prints and elegant satins.

In Camellia Koo’s cabaret stage set you always know whether you’re on the dance floor or in the middle of the jungle, but the characters themselves wander among eras, taking on and dropping identities. And in a first-rate coup from lighting designer Devorah Kengmana, the metallic ribbons that give the cabaret its silvery, Art Deco ambience become the flickering pyre that burns both Hatuey in 1512 and the El Dorado Club in 1931.

The music, alternating pop styles and Afro-Cuban rhythms with its own pleasingly modernistic thunder, gives the singers both jazzy and operatic moments of glamour. And all this activity held me and entertained me for most of the opera’s hundred ten minutes.

But then the politics rather got the better of the opera. Too much of the climactic showdown was merely spoken. Señor Machado (or is he Governor Velazquez in 1512?) is not to be toyed with. His victims writhe but they are crushed. It’s all very clear but—where is the music? These moments intended to lift the heart in freedom-loving fervor, require musical expression, sung performance, to persuade us these sordid events are archetypal.

There have been brief dialogue scenes all night, but an opera’s climax should be musically vivid. Maestro London, explore the souls of your characters, both good and bad, in melody. The early scenes crackle and gleam. Complete that arc,por favor.

My only other serious problem, which won’t bother many others, is that the singers are all “amplified.” Frankly, I don’t think they don’t need it in a house as intimate as the Kasser. A member of the production team told me it was a question of balancing the singing with spoken dialogue, and that is indeed an issue modern operas must increasingly confront. John Adams likes things mic’d. I don’t. Singers know how to project when they sing—how much more difficult can it be to do so when they speak?

Mic’s or not, a number of healthy young voices I would love to hear again—unamplified—came over the footlights. Jennifer Jade Ledesma has the moves and the charisma, as well as the urgent vocalism for Tinima/La India, and there were truly sparks flying as she became fascinated by her Jewish poet, sung by Matthew Patrick Morris, who did not have as many chances for impassioned outburst as I think would suit his eager bass. The role exploits acting and reflecting more than vocalism.

Nathaniel Stampley, too, has had more of a career as an actor than a singer, but he puts Hatuey’s heroics on firm bass-baritone standing. Tenor Tomas Cruz, in the double role of armored conquistador and white-suited dictator, is effectively effete but does not have enough to sing to give his tenor scope.

The losers get the best tunes in the fight for freedom, and Ethan Simpson’s baritone is enjoyable in both Yiddish and Spanish as Vito/Behike. Nicolette Mavroleon has stage confidence and a soprano of distinct potential, as both a confidante of the rebels and a Cuban princess martyred by the Spanish.

The ensemble, kept on stage impersonating the “house band,” moved effortlessly among the many different styles they were expected to accompany under the leadership of Constantine Kitsopoulos.