The career of our beloved Renée Fleming deserves to continue... by whatever means necessary. 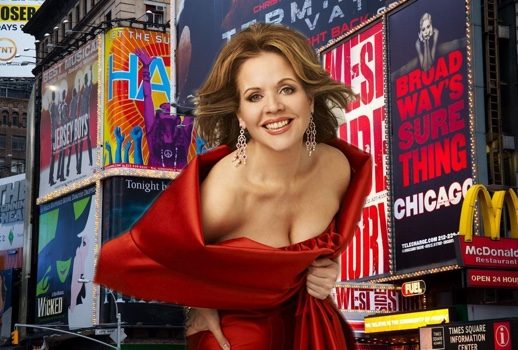 I think most of us knew this day would come. Let us not collapse in unattractive spasms of shame and anguish but, rather, let us show fortitude in our belief that the career of our beloved Renée Fleming deserves to continue… by whatever means necessary.

For as certain as the New York Times announced her retirement from the operatic stage she recanted immediately with a “I never said I was stepping away… for good” and waving a copy of her Living Will with the “do not resuscitate” clause clearly crossed out and initialed in triplicate.

Shortly thereafter she emerged from her chrysalis on the Broadway stage (for the second time) and spent the past six months at the Imperial Theater in Rodgers & Hammerstein’s Carousel singing about the month of June and, in Justin Peck’s acclaimed Tony-winning choreography, dancing with pies.

Decca, smelling fresh coin and spotting a kiosk space in the lobby, immediately put into production a CD of musical theater songs for The Beautiful Voice™  and, lo, we have Renée Fleming Broadway, though surely  the exclamation mark is implied.

The “crossover album” has become a near compulsory rite of passage for any popular classical singer. As a matter of fact there are classical singers who’ve built their entire discography from crossover albums. It’s a practical necessity since when voices lack proper training, stamina, and the requisite carrying power to reach over an orchestra. But let these neophytes not detain us. Our Renée is blameless.

Opera singers have always championed popular music and show tunes from the concert platform. It’s called an “encore.” Established tradition is that the end of the recital is the appropriate time to surprise your audience with a song written within their lifetime. That’s how I got to hear Marilyn Horne sing Simon and Garfunkel’s “Bridge Over Troubled Water,” an experience that haunts me to this day, and I only wish I were kidding.

Some performers have always proven themselves more adept at crossover than others. Going farther back than even Lawrence Tibbett and Helen Traubel there have been those who’ve longed for a broader recognition outside the stodgy confines of the great operatic stages of the world. Many is the diva (e.g., all of them) who’s released a Christmas album or an offering of “standards” usually with an accompanist/conductor of similar prestige.

But there’s a massive difference from, say, Leontyne Price singing “God Bless America” a cappella on the stage of Carnegie Hall and Jessye Norman’s recording of Cole Porter’s “I love Paris” with a Boston Pops arrangement that sounds like a herd of pachyderm are stampeding down the Champs-Élysées. It’s about taste and credibility.

Fleming has always been about her own taste and credibility. Even when she’s strayed from the reservation (with more than her own share of crossover) its always been about music that she enjoys.  That being said it is hard to differentiate sometimes between a passion project and the means to a down payment on a charming Pied-à-terre off the Park. It’s doubly ironic that the revival of Carousel closed this week and Nettie Fowler is now on the breadline.

Backed by the BBC Concert Orchestra and the occasional jazz trio, Renée Fleming Broadway goes through a fairly eclectic mix of songs ranging from the 1920’s to shows that premiered a few years go. They could also be cleanly catalogued as “safe.” The one time she tries something a little imaginative is when she performs a version of “The Glamorous Life” from A Little Night Music as a solo.

I don’t know who we have to thank for the distilling of all the nouns and pronouns but it makes for some clumsy lyric changes and awkward register straddles. And didn’t Audra MacDonald do the same thing at the Lincoln Center 80th birthday tribute? I don’t recall that being a home run but it was certainly far better than this. Someone should have borrowed Audra’s charts.

The other point about album’s like these is that the devil may be in the details but the real horror is in the arrangements.  Very happy am I to report that most of these selections utilize their original musical charts. So the names Jonathan Tunick, Richard Russell Bennett, Irwin Kostal, and Adam Guettel are all credited in the booklet and it’s a relief.

No chorus is employed in spite of the fact that we lose the gorgeous chromatics at the stretta finale of “Wonderful Guy” from Rodgers & Hammerstein’s  South Pacific and whatever complexity that number has turns into a big yellow smile emoji without them. Chorus would have also been welcome too on “All The Things You Are” from Kern and Hammerstein’s Very Warm for May which has rarely been recorded using its spectacular original arrangements.

There are successes here though. Ms. Fleming gives a solid rendition of “Fable” from Adam Guettel’s Light in the Piazza which finds a nice fit for her both vocally and emotionally. It requires a legitimate voice and she’s got the right weight of tone for it. “So big / So small” from Dear Evan Hansen tenders a simple charm and “Lay down your head” from Violet revels in a very modest accompaniment that suits the song and the singer.

She takes a bash at “Something Wonderful” from The King and I but it really wants a mezzo. She does manage the coup of singing the best Sound of Music I’ve heard, with the obvious exception of the film soundtrack of course. The introduction uses a perfect amalgam of the show and film (Bennett and Kostal) and our diva manages to sing it straight and clean without descending into mawkishness.  She’s not Julie Andrews, but then who is?

“Unusual Way” from Maury Yeston’s Nine get’s a cool reading, one of the best things on the program. Yet when she should be simmering she sounds more like she’s simpering.  Then we get all Brecht/Weill with a pastiche of two songs from Kander and Ebb’s The Visit. If only La Diva Renée could bring some heat (literally) to “Love and Love Alone” and “Winter.”

Even when she’s goes for straight sincerity with”Till There Was You” from Meredith Wilson’s The Music Man her conservatory training really starts to get in the way. Her low-gear, operatic approach strips it of most of its casualness and small town allure. The song that  requires a legitimate voice, “My White Knight,” would have been a far better choice.

She duets with Leslie Odom Jr. (another crossover “must’) on a mash-up of Sondheim’s “Children Will Listen” and R&H’s “Carefully Taught” which starts promisingly but then ends up feeling more like a lecture.

Somehow three tracks wandered over from the apparent follow-up album, Renée Fleming Jazz. R&H’s “Loneliness of Evening” (cut from South Pacific then repurposed for Cinderella), Cole Porter’s “Down in the Depths,” and “All the Things You Are”  get jazz arrangements played by the trio of Christian McBride (bass), Dan Tepfer (piano), and Carl Allen (drums.)

Fine musicians of sensitivity and skill they prove themselves to be. They bear no responsibility for the fact that the lyrics of these fine songs are stretched nearly out of comprehension by our Diva’s diphthongs and clipped consonants like we’re suddenly attending a musical taffy pull. She makes all the standard jazz noises but I don’t find any of them to be organic or idiomatic frankly. She’s mayonnaise masquerading as spicy mustard.

Some omissions are surprising. Only one Andrew Lloyd Webber tune, nothing from Ragtime or On the Twentieth Century, or any Frank Loesser which would have been intuitive choices. Very little Sondheim. She does sing a song by her friend Sting from his show The Last Ship but her performance does little to elevate what is obviously a sophomore effort.

She has the good sense to stay away from Mama Rose or any of the big 11 o’clock numbers which could have sent this whole affair skyrocketing into high altitude camp. Her unwillingness to deviate from the “Beautiful Voice ™” Vocal Technique Handbook” and give us a little Broadway Belt is disappointing.  As an audience we’re looking for excitement; the colored lights, the stage dust. Instead we get unnecessary plangency, scoops galore, and those catch breaths between phrases that sound like crying.

So the disc is not quite the Broadway suicide vest I was afraid of but then again far too earnest for a party tape. If you’re a fan of La Fleming I’m sure you’ve already got this on order and if you aren’t let me assure you you’re good right where you are.