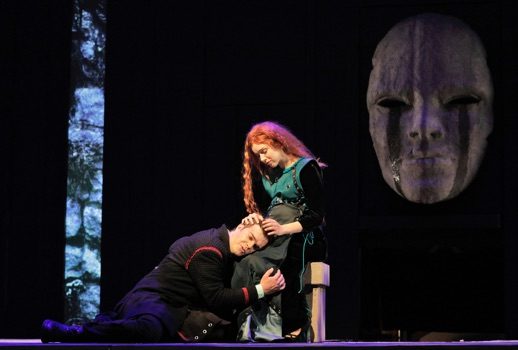 Last weekend marked the opening night for West Edge Opera: Debussy’s Pelléas et Mélisande. Now in its 38th year, this nomadic East Bay opera company has a long history of staging rare and unusual operas in all sorts of places; last year it was at an abandoned warehouse and the year before, abandoned train station.

This year, the venue is The Craneway Conference Center in the city of Richmond, on the waterfront. This tall, spacious and airy hall, a former Ford Motors Assembly plant, was probably not a first thing in your mind when you think about operas. I had my doubts when I first got there myself. However, they solved the problem by blocking off a small section of the big hall for the stage and the audience, and I thought it did pretty well.

I must admit that I have soft spot for West Edge Opera. I can’t imagine the trouble of having to find a space for their opera festival every year, and yet, year after year, they strive to do it well. There was a really nice article about them online and to call it “guerilla opera” is a very apt description.

Pelléas itself wasn’t the first choice for this year. When it was announced last year, Britten’s Death in Venice was on the bill together with “Mata Hari” and “Quartett”, and it was supposed to star William Burden and Hadleigh Adams. Eventually, Death in Venice was dropped, Adams sang the role of Vicomte de Valmont in Quartett instead, and here we are with Pelléas at the opening night. And what a wonderful opening night it was!

Debussy’s only completed opera of 1902, with libretto adapted from Maurice Maeterlinck’s Symbolist play of the same name, long divided opera aficionados left and right; people either love it or hate it. I happen to love the score, but I recognize that it needs an able hand to direct it to prevent it from being a total bore.

I felt that director Keturah Stickann was really successful in bringing the multi-facet aspects of Pelléas came to life. In fact, it was astonishing for me to see that she could achieve so much with so little resources that she had.

Her take on staging this opera was as mysterious as the opera itself. The stage was a black wall, with many openings for entrance/exit, for projection screens, for balcony tower scene in Act 3, for entrance of the beds in Acts 2 and 5 and for hanging the giant white mask representing the Blind Men’s Well in Act 2.

In front of the wall, a raised podium was placed, where most of the actions took place. During the many orchestral preludes, supernumeraries in black placed multiple objects on that podium as set changes, so there weren’t any lag times at all. It was very well choreographed, methinks.

Interestingly, the projection screens were done on strips of the wall. For example, in the forest scene in the beginning of Act 1, two strips of projection screens showed trees and light, while the rest was still bathed in black. I think it worked extremely well to maintain the mysterious nature of the scene. Similarly, the following scene in the castle, a small window opened to show a projection of a stained-glass window, a very clever idea to show a castle without actually having a castle.

For me, the biggest pièces de résistance was the tower scene of Act 3. Here, with Mélisande perched high above a balcony on top of that wall, you could mistakenly feel that you stepped into the set of Disney’s Rapunzel on Broadway! Yes, it was that good! (Although, the thought of having Pelléas & Mélisande in a Disney Broadway production was indeed very laughable!)

If I might nitpick, my biggest problem with the staging was the lighting. Because of the tight space, the lights were placed right above the stage, hence the spotlight was right on everybody on stage. This created really bright scenes, and in my opinion, it was way too bright for this opera (They all sang about the castle being dark and gloomy, after all!)

In addition, I found the costumes were pretty intriguing, to say the least. Pelléas was in a short kilt, King Arkel was in a long kilt with leather jacket, but Prince Golaud was in black pants. Curiously, Geneviève and every single woman on stage apart from Mélisande were in hijab-like headgear, kind of suggesting that Allemonde was somewhere in Middle East (but again, that notion clashed with the kilts wore by Pelléas and King Arkel)!

Mélisande’s green costume and her bright red hair reminded me a lot of Merida from Pixar’s Brave movie! So, yes the costumes were pretty much all over the place.

With their matinee idol good looks, both Pelléas and Mélisande again pretty much belonged to Disney Broadway productions. They sang very well too, particularly Kendra Broom as Mélisande. The West Edge Opera website showed a conversation video between her and Federica von Stade, the leading Mélisande of her time, and I think having her as a consultant really helped Kendra’s characterization of Mélisande.

Interestingly, hers was NOT a timid Mélisande; but instead, her Mélisande was more of a dazed and confused one, torn between the two men that she loved. Her beautiful mezzo voice was warm and radiant, and her acting was excellent. As Pelléas, David Blalock sang pretty well, and although his characterization was quite bland (but again, Pelléas always struck me as rather bland in person), his voice carried it through.

Efrain Solis brought a multi-dimensional interpretation as Golaud. For once, this Golaud was very human; sympatheric yet flawed. He was a tender soul with a bad temper, and you couldn’t help but rooting for him. He was shown to be much older in this production than both Pelléas and Mélisande, so when he sang about their kiss as a child in the last act, it was so very believable. He sang really well also.

In a final directional stroke, Golaud was shown slitting his wrist as the opera drew to a close, meaning that the tragic story brought victim to all participants of the love triangle. (I don’t believe the Maeterlinck play and Debussy opera actually resolved to this kind of ending).

Malin Fritz and Philip Skinner made a sympathetic Geneviéve and King Arkel, although there was something rather disturbing when King Arkel insisted to kiss Mélisande, a bit more than normal. Erin Enriquez acted well as Yniold, although her voice was kind of drowned by the orchestra, at least from where I sat.

The program mentioned that Jonathan Khuner, the West Edge Opera music director, made orchestral reduction for this production. To my ears, I thought the reduction worked pretty well, the orchestra almost sounded like a chamber orchestra; you could hear each instrument clearly.

I did, however, miss the thick wall of sound that the full orchestra provided though (it didn’t help that I listened to Karajan’s recording to prepare for this production!). Khuner did keep the flow moving, and it was a big asset to this production! I now looked forward to his conducting Tristan und Isolde in concert form at Herbst Theatre end of this month!

It was truly a great night at the Opera, and I wish I could watch it again. There are two performances left, Sunday August 12and Friday August 17. If you happen to be in Bay Area, don’t miss the opportunity to see this beautiful production and support the local “guerilla opera” company!