Bard cultish Summerscape series continues to test our esoteric limits with Demon, Anton Rubinstein’s little-known opera about a demon who hankers for a Georgian princess. 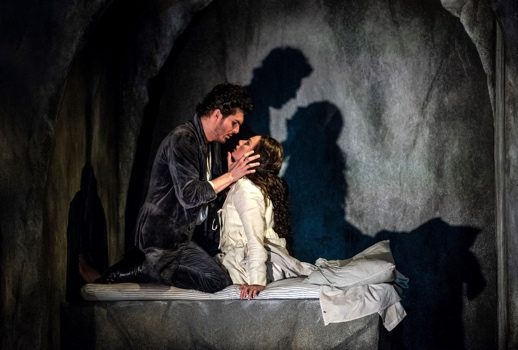 Bard’s cultish Summerscape series continues to test our esoteric limits with Demon, Anton Rubinstein’s little-known opera about a demon who hankers for a Georgian princess. The work, which debuted in 1875, was for many years a sellout at the Mariinsky, captivating the Russian public with its brutish take on Lermontov’s racy poem of the same name. To this day it’s still performed over there with some frequency. Here in the West, the opera’s hardly known.

Daring us to cogitate this discrepancy with a slack, guignol production that runs through August 5, conductor Leon Botstein enlists director Thaddeus Strassberger, an all-Russian cast, and a delicious troupe of dancers to help him dust off the rarity.

As with previous summer entries at Bard, the hope is that a salvage mission such as this one might recuperate lost gold and perhaps even justify future stagings. The conclusion one tended to draw from this uneven production, however, was that hopefully, there’ll be better stagings in the future.

One can’t blame them for trying. Part of what makes this opera so irresistible is its score, which swells with lush melodies, arias, and duets, especially in the last act. (No accident that the Demon’s ruminative second-act arias also became signature for Hvorostovsky.)

Unlike fellow members of the group of five Russian composers known as “Pyatyorka,” Rubinstein was less enthralled by Russian folk revivalism, and more committed to Western harmonics: a distinguished pianist in his day, he inspired Lhévinne and Rachmaninov to take up playing Schumann.

One hears such referral to the West throughout his score for Demon—in both its music and thematic elements. At the center of Rubinstein’s three-act fable about a fiend in love is a romantic anti-hero worthy of Byron, lonely and disheartened by the world. “Sowing evil brings me no pleasure,” he laments early on.

Having learned from an Angel that human love will restore him to heaven, the Demon spots Tamara and is immediately smitten, tracking her from the rooftops like a hunter and later offing her fiancé, the handsome Prince Sinodal, with the help of roving Tartars.

In her program notes, Swarthmore visiting assistant professor Emily Frey points out that Demon is essentially a 19th century domestic drama, one that “humanizes its protagonist.” The opera’s stirring emotional realism, she argues, might therefore help explain the title character’s “life-sized and relatable” accessibility to Russian audiences, as well as the fairytale plot’s realism-oriented concern with human feeling.

Strassberger’s staging certainly makes an effort to play up these psychodynamics, allowing for moments of tenderness between the title character and the elusive princess, the Demon’s object of obsession. But rather than focus on the former, he tosses his attention over to the princess, and introduces conceit after conceit to spotlight her ambivalent feelings toward both her betrothed and her supernatural pursuer.

She appears in their dreams. She drifts like an apparition through the open fields and rain. (Sets by Paul Tate dePoo III tend to skew dark, gothic and cavernous, and take their color from iconographic projections designed by Greg Emetaz.) Even when the girl isn’t singing, she’s onstage for much of the action, ensconced in a gloomy convent with other languishing ladies, possibly losing her marbles.

It’s not a bad impulse, and I admire the director’s desire to dredge new feminist material from what’s otherwise a long and indulgent libretto (by maundering Rubinstein collaborator Pavel Viskovatov, who really could have stood to self-edit). But more often than not, the staging’s confusing, contradictory, or simply too dense.

The actors do their best with what they’re given, though. On Sunday, baritone Efim Zavalny (turret-hopping in the Stygian velour-track-smock fantasy of designer Kaye Voice) was an aristocratic demon, if muted and enervate in the upper registers. As his consort the Angel, mezzo-soprano Nadezhda Babintseva sang with terrific force, flooding the hall with the damning, magisterial sound of one about to curse the Demon to more downcast wandering.

Back on earth, other moments of redemption included bass Andrey Valentii, who turned in a smooth-voiced performance as Tamara’s father in a fur hat, Prince Gudal; and youthful tenor Alexander Nesterenko, a mainstay at Moscow’s Stanislavsky Opera, who was enchanting as the doomed Prince Sinodal. Nesterenko is someone to look out for: his ethereal messa di vocecounts among the sole things I remember from act one.

Considering how memorable I found her performance as Xenia in Bard’s Dimitrijlast year, I wish I could say I was quite as taken with Olga Tolkmit’s oddly shouty Tamara. Her voice is certainly idiomatic: loud and pushed at its apex, throaty and Slavonically abdominal in its lower depths. And her acting—as a princess torn over her fate—was sometimes vivid and exciting. But a general harshness pervaded her tone, rendering the last act unduly weak, and I found myself at times confused by her over-the-top performance.

Maestro Botstein and the American Symphony Orchestra accompanied all with a clean (if pedantic) reading of the score, particularly impressive, I must say, during…

…the opera’s wedding scene dance sequence! Featuring the show-stealing, camp fantasia of a hamstring-defying ensemble of male dancers and the

If welcoming Demon (or any other show) back into the rep also means welcoming back tip-toe, skip-dancing of the sort I saw at Bard last weekend, you’d better believe I’ll be among those leaping for tickets, and probably in my best and most colorful rubakha.