“Trove Thursday” pays tribute to Dmitri Hrovostovsky with a broadcast of his final new role, Rubinstein’s The Demon. Weeks ago the world was saddened but not surprised at the “news” that Dmitri Hvorostovsky had died. When it turned out that many usually reliable news sources had erroneously reported it, we all rejoiced. Unfortunately today we have learned—and it’s been reliably confirmed—that the magnetic Russian baritone has succumbed to the brain cancer that he had fought so bravely the past few years. “Trove Thursday” pays tribute to Hrovostovsky by presenting a broadcast of his final new role, Rubinstein’s The Demon.

I first remember hearing about Hvorostovky when he won the Cardiff Singer of the World competition in 1989 “beating” Bryn Terfel who had to settle for the Song Prize. During the televised finals we encountered a sampling of his ravishing Prince Yeletsky, a role which inevitably became his calling-card.

Two years later, a concert performance by the Boston Symphony Orchestra of Pikovaya Dama became the first opera he sang in New York. An electric evening at Carnegie Hall, it proved my only chance to hear Vladimir Atlantov and Maureen Forrester but the striking twenty-nine-year-old baritone’s plea to Mirella Freni’s Lisa stopped the show dead.

It took four more years for Hvorstovsky to arrive at the Met again as Yeletsky in Elijah Moshinsky’s thrilling new production. At its fourth performance he more than held his own opposite Karita Mattila’s fevered Lisa, Ben Heppner’s obsessed Ghermann and Leonie Rysanek’s terrifying Countess. He soon became a Met regular, performing Valentin in Faust, Belcore in L’Elisir d’Amore and the title role in Don Giovanni, although he and Mozart never felt a good fit.

But it was in other Russian roles as well as those by Verdi that he became one of his generation’s most beloved stars. It’s hard to imagine that he wasn’t the Met’s first choice for Robert Carsen’s new Eugene Onegin in 1997 but we had to wait a full decade for him to bring his celebrated portrayal to the house opposite an inspired Renée Fleming. He effortlessly embodied the aloof aristocrat in Tchaikovsky’s opera just as he had the tragic Prince Andrei in Prokofiev’s War and Peace (his only other Russian role at the Met) when that work was finally premiered in 2002.

Like that superb Mattila-Rysanek-Heppner Pikovaya Dama, unbelievably War and Peace was not videotaped depriving all of his first Met encounter with Anna Netrebko whose debut as Natasha heralded a new star even if the house didn’t seem to realize it at the time. Unfortunately their fans had to wait more than a decade for them to reunite at the Met but that 2015 Il Trovatore was one of the most memorable evenings in recent Met history.

Hvorostovsky’s heroic return after his cancer announcement as a dashing but unexpectedly sympathetic di Luna was greeted with ecstatic ovations all evening and eventually a volley of flowers exploded from the orchestra pit for him during the rapturous finals bows.

The HD transmission of Trovatore on October 3, 2015 was his final complete Met performance; his much-anticipated Onegin opposite Netrebko’s Tatyana scheduled for earlier this year never came to pass.

Although I sometimes wondered if nature truly intended Hvorostovsky for Verdi, he turned in many memorable performances of roles by the Italian master at the Met. A stern Germont in La Traviata and a suave Rodrigo in Don Carlo were inevitable but both his wounded, enraged Renato in Un Ballo in Maschera and his noble Carlo in Ernani were truthfully, expressively embodied. The only Verdi role which didn’t quite work was Simon Boccanegra; it seemed that he hadn’t yet quite figured that one out, coming across as cold and distant.

Circumstances denied us both his Iago (which had been rumored for the recent unfortunate Bartlett Sher production) and his Don Carlo in La Forza del Destino which would have been a new role for him and a centerpiece of this fall’s canceled new production. I missed his complete Rigoletto but his immensely moving appearance at last spring’s Met Lincoln Center 50th Anniversary Gala fiercely singing “Cortigiani” brought tears and endless bravos from everyone. After more than 180 appearances, it was the last time he ever sang there.

La Cieca asked if I had any other live Hvorostovsky performances to share beyond the remarkable The Tsar’s Bride which appeared on “Trove Thursday” last month.

I had stashed away in preparation for Bard Summerscape’s production of the opera next summer a broadcast of his final new role as Rubinstein’s The Demon and offer it here as a memorial.

For many, November 22 will always be edged in tragedy but it should also be remembered that it’s St. Cecilia’s Day which celebrates the patron saint of music. I hope the Met’s performance of the Verdi Requiem on Friday will be dedicated to the memory of Dmitri Hvorostovsky. 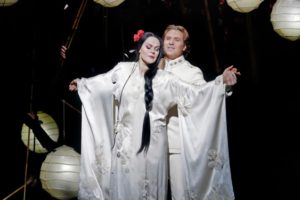 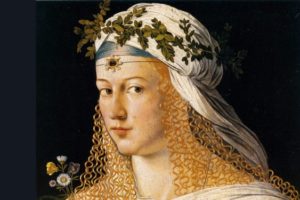