11:40: Then Rene Pape matched Hvorostovsky, then Zajick matched (topped?) them both, then who the hell had the idiotic idea of doing the Easter Hymn with a mezzo who can’t sing it and the chorus apparently stoned or else in another city? (Oh, and did you notice the long, noisy scene change afterward? Vintage Volpe.)

11:05: Finally, SOMETHING that sounds like it belongs on a gala. Hvorostovsky may not sound quite that huge in the house, but it’s a star voice performing like a star. Stunning breath control (and a fine sense of line) in the first phrase of the “Io morro!”

10:15: Admittedly only the first half . . . but a $3,000 top for this? Yes, La Cieca admits you don’t get to hear Kiri te Kanawa all that often, but the only novelty rep thus far was Fleming’s Trovatore … which is one of her current concert pieces. It really sounds like nobody is really trying to make the evening special. Or, dare La Cieca say it, like they are doing what they are required to do, and not any more — perhaps since nobody can be accused of loving Joe Volpe?

9:30: Fleming singing Trovatore on Milanov’s centenary? And, folks, the action in the chat room is so frantic, I’m going to wait until the interval to blog more. BTW, who sings Dutchman at a gala? Isn’t it a bit, I don’t know, GRIM?

9:00: Natalie Dessay starts at the beginning of the recit. for Sonnambula. I think she actually sounds more interesting now with the slight wear and tear on the voice — at least in this plaintive music. We’ll see what the cabaletta is like.

Maybe she is making more space for the “Credea” than she should. I don’t think it should be quite this much work. And of course running out of breath isn’t such a good idea.

Well, she seems to know how the cabaletta is supposed to go, but boy the voice is sketchy except at the very top. And not much of a B-flat to finish.

8:45: Placido Domingo in a zarzuela about a fisherman. Oh, it’s “No puede ser” — d’oh! And now Frederica von Stade sings with an untuned piano. If only Voigt’s novelty song were of this quality…

When I think of Yevgeny Onegin, the first name that comes to mind is Bill Irwin.

8:30: Half an hour in, and finally some opera singing. Jesus Christ, three conductors for the first three numbers!

Wow, Florez is close miked! A little tight to start with, but after the first cadenza he sounds warmed up. If only that ghastly chorus weren’t yowling behind him.

8: 20 PM: Remember, it’s NOT a contest. Except to see which first soprano sounds oldest.

Better stream at http://wuot.sunsite.utk.edu:8080/ramgen/broadcast/wuot.rm. Ah, the stunning set for the Ariadne. How appropriate for the ex-carpenter.

For an encore, Debbie will sing, “After You’ve Gone.”

8:00 PM: Sigh, if Renee really wants to save the Met broadcasts, she would start singing better in Rodelinda. Meanwhile, I’m off to test-drive a Lexus. 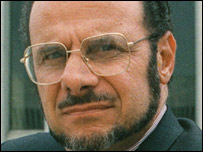 Note that the broadcast is available on WQXR’s website. The live chat has already begun; you can join by clicking the “chat now” button to the right.

Most recent news: Mirella Freni will make only a “tribute” (nonsinging) appearance, and Ruth Ann Swenson bagged this afternoon’s Elisir, so don’t expect her tonight.

At the moment, we have a violinist playing Rachmaninoff on WQXR. Not part of the gala…