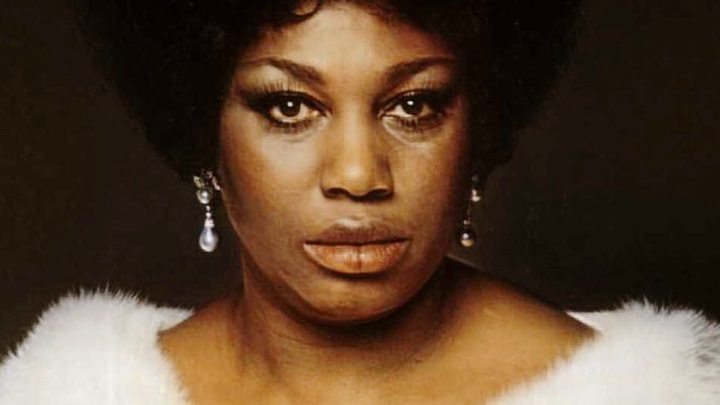 I only heard Price twice in person. The first was at the 25th Anniversary Gala of Lyric Opera of Chicago during which she performed “Ritorna vincitor” after being introduced by Elisabeth Schwarzkopf! A complete broadcast of that special occasion can be heard here.

Five years later and two months before her Met farewell as Aïda, I attended a recital by Price in my hometown’s cavernous Memorial Hall. I had given up on staged opera in Dayton years earlier, so it was pretty thrilling to hear one of the biggest stars in her jam-packed local appearance. 1984 proved to be an atypical Dayton diva year as Marilyn Horne too appeared in recital five months earlier. I apologize for Ohio audiences as you will hear them applaud after individual movements in the Cincinnati May Festival Stabat Mater, a work Price didn’t sing often.

An apocryphal story has made the rounds that toward the end of her career Price would instruct her management to arrange for 10 recitals per year at a fee of $100,000 each. I have no idea if she actually commanded that sort of fee but it speaks to a superstar status that few have attained before or since.

Except for the Honegger broadcast with Mr. and Mrs. Bernstein, nearly all of today’s offerings are “pirate” in-house recordings, so some special indulgence is asked for their sound quality. In addition, the Aïda. Butterfly and Tosca are each missing bits of music.

The Philadelphia Aïda took place two months prior to her Met debut and is an early collaboration with Carlo Bergonzi with whom Price sang often at the Met. It might appear to be a typical Met cast for the time except that the Ramfis is Norman Treigle and the conductor Julius Rudel. The San Francisco Butterfly comes from later in that Met debut year and is only one of two live Price Cio-Cio-Sans I’ve encountered; the other comes from the Met 12 years later.

Price first sang Puccini’s Manon in San Francisco in fall 1974; during the same season she brought it to the Met. She sang just four performances and the broadcast went to Dorothy Kirsten. I wonder if John Alexander was Price’s originally scheduled Des Grieux?

The excerpt from Strauss’s Die Liebe der Danae runs nearly eighteen minutes, much longer than the chunk available on YouTube.

Cincinnati May Festival
14 May 1971
In-house recording

A Leontyne Miscellany: Arias with Orchestra in Concert

Each Price performance track can be downloaded by clicking on the icon of a cloud with an arrow pointing downward on the audio player above and the resulting mp3 file will appear in your download directory.