Soprano Lydia Grindatto confirmed the fine impression she had made at Giargiari vocal competition with a charismatic, thoroughly inhabited performance that showed careful preparation in every aspect. 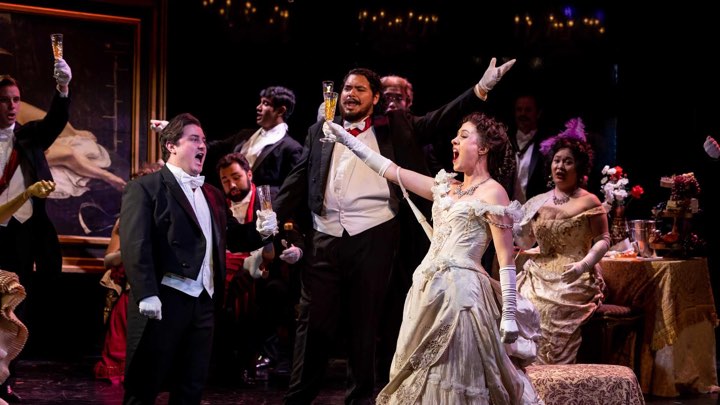 In October, Philadelphia’s Academy of Vocal Arts had their strongest Giargiari vocal competition in memory. This month, they began their opera season with an Italian warhorse, La Traviata, which in the cast I saw showcased the first-place winner, Lydia Grindatto as Violetta. Operas to come this season are Don Pasquale (in February) and Don Giovanni (in April).

If the focus on such centrist Italian-language repertoire feels very conservative, it’s worth remembering that the primary goal of AVA is to prepare and polish young singers for careers in opera. On that level, Traviata proved a success.

Grindatto in particular confirmed the fine impression she had made at Giargiari with a charismatic, thoroughly inhabited performance that showed careful preparation in every aspect. All Violettas in my experience find their most natural fit in one of the opera’s three acts. For Grindatto, it’s Act II, where her high-octane emotionalism and shining upper-middle register come into focus.

In a bigger house, a bit more vocal heft might be needed, but she scaled the voice skillfully so that when it really opened up, one had the sense of dramatic thrust. In Act I, she negotiated the coloratura honorably—even gesturing at the trills in “Sempre libera” which too often go unmarked—but it lacked the ultimate sense of easy abandon; she was very touching in Act III, but I wanted more intimacy and fragility—we didn’t really get a true pianissimo (nor from virtually anyone else; more on that later).

On balance: this was a very significant achievement; I have every reason to think Grindatto will be a successful major-theater Violetta.

Luke Norvell (Alfredo) and Kevin Godínez (Giorgio) also confirmed the good impressions they made at Giargiari and in other AVA performances. Norvell, now a second-year, has made notable strides since I first heard him. His lambent juicy-lyric tenor has greater ease at the top now, and he seems more confident and relaxed on stage. 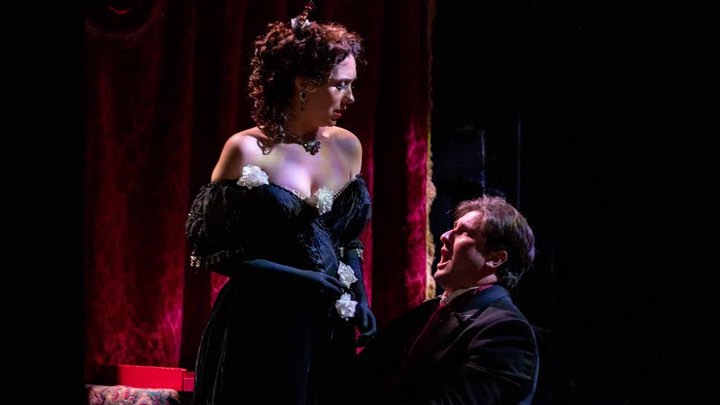 His upper-middle range, where much of this role (and many others) lies, is especially beautiful. His Italian diction and style could use more polish, but all signs are good. Germont père is probably a half-size too big for Godínez at this point, and it’s not a role that allows his exceptional stage charm to come through, but it was solidly and idiomatically sung.

I wish all these performances had been better served by the production and conductor. Director Dorothy Danner faced the on-going challenge of AVA’s very small stage, but except for a few attractive tableaux, the production looked awkward and without any significant dramatic ideas. A pantomime that began the opera made no sense, and having Violetta undress in the middle of her living room was one gaucherie among several.

AVA’s veteran maestro Christofer Macatsoris is a lionized figure to many, but for me his conducting—which has always emphasized virility over lyricism—has grown alarmingly crude over time. Here, there were some limited payoffs in his brute force: the opening music for both party sequences had an exciting pulse.

But against this, the tempi were too often rushed and phrase endings blunted; I didn’t hear a true pianissimo note all evening. The orchestra—often quite good here—sounded off-form. AVA’s singers aspiring to major careers deserve better.