A trip to Mediterranean climes came through musically, as the Boston Symphony Orchestra presented a largely satisfying concert performance of Don Giovanni on July 16. 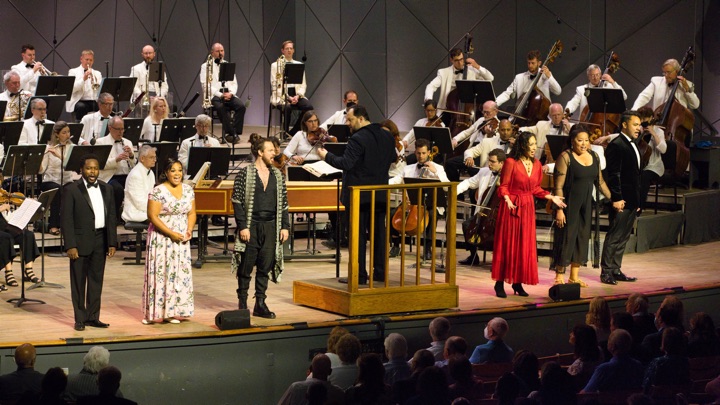 The sultry temperatures afflicting most of the country largely avoided the Berkshires last weekend, offering a perfect respite from the simmering summer heat of the city. Yet a trip to Mediterranean climes came through musically, as the Boston Symphony Orchestra presented a largely satisfying concert performance of Don Giovanni on July 16. More than just an ambitious undertaking for the company at its holiday home in the country, the evening ushered in another return to normalcy—it was the first vocal music presented at the Lenox venue since 2019, since pandemic precautions last summer scrapped any plans for singing.

And at least from that musical standpoint, the event was mostly a triumph. Caruso may have said once that Il Trovatore only requires the four greatest singers in the world to be successful, but one could just as easily posit that an effective Don Giovanni only needs seven. “Greatest” might be a stretch—and there were some instances of spottiness and discomfort—but the complete forces were on as high a level as I’ve personally encountered across the last two decades. It’s equally admirable that the performance managed to lose not a single soloist even as Covid-19 cases surge throughout the country.

The mostly American cast was notable especially for its distaff portrayals. First among equals was the electrifying Nicole Cabell, a Donna Elvira for the ages in terms of vocal quality and temperament. From her first appearance to the final quintet, she not only sang with an attractive, chestnut-colored tone but pitched every note with absolute assurance, and showed no difficulty with florid passagework. 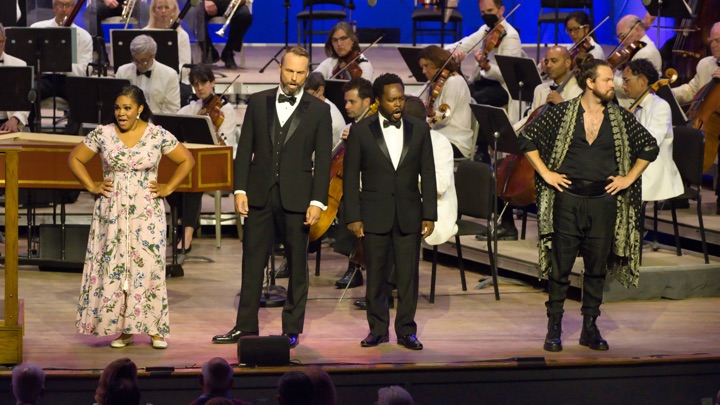 Although no director was credited, Cabell acted with great specificity throughout, always connecting with her scene partners and fully inhabiting each dramatic moment. “Ah, fuggi il traditor” was an appropriately sympathetic plea to Zerlina to not make the same mistakes she had in loving a wayward man. Her concert dress—a striking cardinal red, yet modestly ankle length—suggested both Elvira’s combustible personality and her overall sense of decorum. My companion for the evening put it best when he said it was the kind of performance that an aspirant Elvira should use as their benchmark for learning the role.

Michelle Bradley mostly matched Cabell’s artistry as Donna Anna, and she also provided a welcome return to a richer-voiced conception of the role. Her velvety timbre enveloped the music, but not at the expense of speed—even in “Non mi dir,” which fells many a soprano, she executed the tricky coloratura with surprising accuracy. Throughout the performance, Bradley tended to use vibrato as an interpretive tool, which brought an uncommon musical warmth to a role than can sometimes seem rigid.

Although high, pretty singing may be the stock-and-trade of rising soprano Janai Brugger, she displayed a surprisingly refulgent lower register and deft comic acting in Zerlina’s arias. Cody Quattlebaum was an unusually indignant Masetto, although his outfit for the evening—yoga pants and a silk printed smock—made him look like he was about to lead a spiritual retreat. 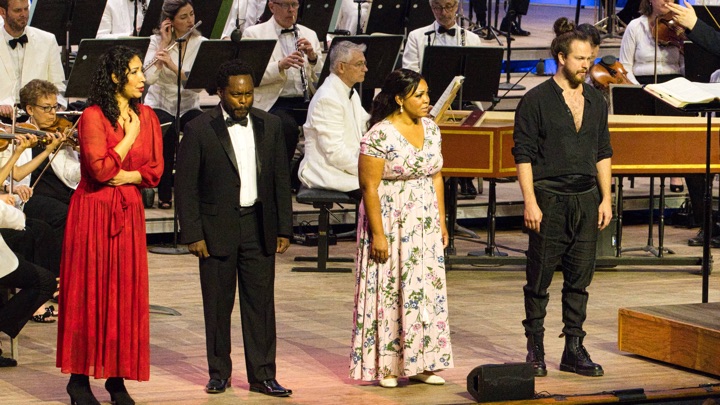 Amitai Pati sang Don Ottavio’s music with elegance and a real sense of Mozartian line, although some of his highest notes emerged with hollowness. Ryan Speedo Green brought appropriately stentorian vocalism to the Commendatore, but he struggled somewhat to project a threatening, otherworldly presence. Will Liverman was an unimpeachable Leporello from a vocal standpoint, but more often than not, he simply wasn’t very funny.

The title role of this opera should suit Ryan McKinny in all aspects, but among the principals, he had the most variable evening. Despite cutting a seductive figure in exquisitely tailored eveningwear and black mask., he generated little chemistry with any of his conquests, and his relationship with Leporello—half playful, half paternalistic—remained undefined. McKinny sang with a dusky, hooded quality that sounded particularly ill-suited to the Don’s second-act canzonetta. There was nothing even remotely disastrous about McKinny’s performance, but given the especially high level of the other singers, his deficits stood out more strongly.

Andris Nelsons has made opera a hallmark of the Tanglewood season during his tenure as the BSO’s musical director, but his reading of the score lacked in originality or individuality. From the sedate overture to the routine finale, it was a competent performance, but of the kind you might expect from a regional opera company with a pickup orchestra. Few members of the BSO ranks distinguished themselves as intra-orchestral soloists.

Yet even if some elements didn’t cohere, it was a joy to hear some of the greatest music ever written in a lovely setting, on a perfect summer night. More than ever, this performance signaled that Tanglewood is back..