The elusive La dame blanche returned for one evening to New York City on May 28 thanks to the New Amsterdam Opera led by maestro Keith Chambers. 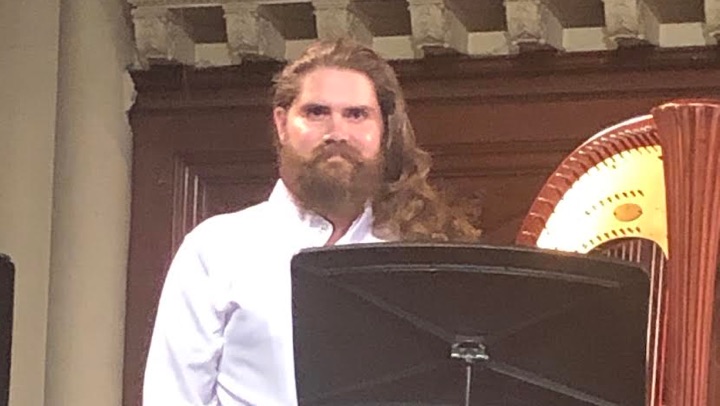 François-Adrien Boïeldieu’s 1825 opéra-comique La dame blanche was a huge hit in its day – by 1862 it racked up over 1,000 performances at the Opéra-Comique.  Boïeldieu was working from a libretto by the prolific Eugène Scribe who cobbled together a lighthearted romantic romp with supernatural and gothic elements from no fewer than five novels by Sir Walter Scott.

The story concerns mysterious goings on in 18th century Scotland involving the missing heir of the house of Avenel, a dastardly steward looking to seize the ancestral castle on the moors, a hidden fortune in gold and a mysterious ghostly spirit “The White Lady” or “La Dame Blanche” who guards over the fortunes of the Avenel family.

By the end of the 19th century, the work had become much rarer even in France and the title was only kept alive in the 20th century by distinguished recordings of the showy tenor solos – notably by Fritz Wunderlich, Nicolai Gedda and Juan-Diego Flórez.  Historical discophiles will cite stylish older solo recordings from Edmond Clément, David Devries, Andre D’Arkor and Miguel Villabella that are paragons of old-school French singing:

At the Metropolitan Opera, the work has had three performances—all in German.  The first two were in the 1885 season and there was one sole performance in 1904 with tenor Franz Navál as Georges Brown and, in a bit of unlikely casting, erstwhile Wagnerian Johanna Gadski as the lighthearted coloratura heroine Anna.

The rest was silence for La dame blanche until January 30, 1992, when the intrepid Eve Queler led a concert performance in the original French at Carnegie Hall under the auspices of Opera Orchestra of New York.  That performance also marked an early appearance by a fast-rising young soprano named Renée Fleming partnered by tenor Robert Swensen.  That performance is available in audio as part of the Trove Thursday collection.

The elusive La dame blanche returned for one evening to New York City on May 28 thanks to the New Amsterdam Opera led by maestro Keith Chambers.  The venue was the Center at West Park in the historic West Park Presbyterian Church on West 86th Street (which sadly is in danger of being demolished to make way for commercial development.)  In attendance was Ms. Queler who donated the Opera Orchestra of New York music library to New Amsterdam Opera which allowed them to present the work.

There are a number of difficulties in presenting French opéra-comique in international opera houses.  Opéra-comique has discrete musical numbers interspersed with spoken dialogue scenes in French.  Non-francophone opera singers are not trained to project spoken dialogue convincingly with élan, most opera houses are too big for spoken dialogue and there are difficult matters of acting ability and French pronunciation.  It requires specialists and even young French singers are no longer trained in the genre.  That is why Bizet’s Carmen is usually heard with recitatives by Ernest Guiraud.

The New Amsterdam Opera availed itself of a spoken English narration performed by bass-baritone Steven Herring using the same script that Opera Orchestra performed thirty years ago with character tenor Nico Castel as the narrator.  It was a practical choice and more comprehensible to the audience than stumbling fractured French dialogue performed by the singers.

The singers were uniformly young, fresh of voice, enthusiastic and very well-rehearsed.  French style was somewhat short in supply but that is also the case in France let alone the upper west side of Manhattan.  The orchestra was also well-rehearsed, played accurately in tune and with crisp ensemble under the sure baton of Maestro Chambers.  There was a reduced but adequate and adept chorus.  Boïeldieu’s score is full of bouncy or dramatic ensembles which require musical precision and tight coordination—these performers did not disappoint.

Though the title La dame blanche would seem to indicate that the lead soprano who impersonates the titular ghostly apparition should have the most rewarding role, the piece seems to be a tenor vehicle.  The dashing, generous-hearted English military officer Georges Brown breezes into a Scottish village immediately winning all hearts including that of Anna, the ward of Gaveston the sinister steward of the Avenel family mansion.

Brown has big showy tenor solos in each act including the rollicking “Quel plaisir d’être soldat” in Act I, the enticing dreamy “Viens, gentille dame” in Act II and the nostalgic “Reverie” in Act III along with his contributions to various duets and ensembles.  All this music is written for the classic old-school French high lyric tenor with floated heady voix-mixte high notes galore but also requiring flexibility with fleet runs and cadenzas in the old bel canto school.

Tenor Arnold Livingston Geis is a versatile artist who has appeared on Broadway in Intimate Apparel at Lincoln Center, worked in contemporary music while performing a wide array of classical repertory from Rossini to Missy Mazzoli.  His tenor is bright and high-placed with easy access to pingy high notes which the role of Georges Brown demands.

What he doesn’t have is the mastery of voix-mixte which is not something that contemporary opera singers are taught and is perhaps considered old-fashioned, affected and technically suspect with its use of falsetto.  Geis did soften his bright tone for “Viens, gentille dame” and lightened it to piano in the repeats of the main theme.

What Geis does have is a theatrical personality bringing plenty of charisma and witty dash to his characterization.  Also, Geis was working an impressively long mane of chestnut locks (probably grown out during the long and tonsorially challenged pandemic quarantine) which he let down like a male Rapunzel or Mélisande before his big Act II solo and proceeded to whip about in Fabio-like manner.

The other roles are musically conceived by Boïeldieu in a more conventional manner than the tenor lead.  There were opportunities for musical individualization of the lead soprano Anna in Act II where she appears before Georges Brown as the White Lady, which the composer did not take advantage of.  Anna, disguised as the spirit, recognizes Georges Brown as the wounded English soldier she had nursed back to health during her exile from Scotland and had become enamored with. 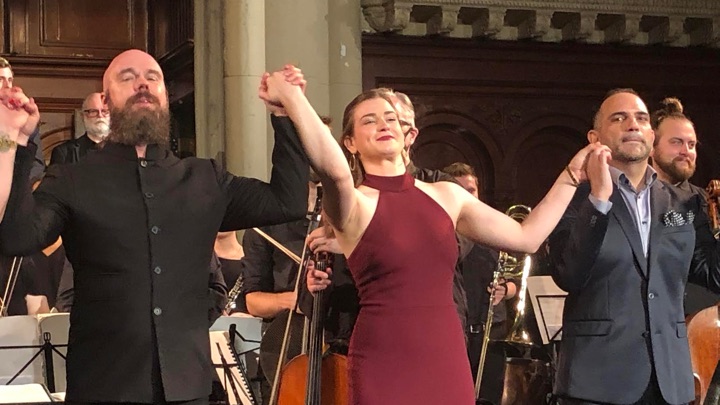 The duet could have been full of wonderment, mysterious seduction and floating teasing phrases full of enticement and charm—instead we get a bouncy allegro.  Anna’s third act aria and cabaletta is well-constructed but also seems unoriginal lacking character.  Much of the rest of the score, outside of the tenor solos, is charming, tuneful but conventional.

Boïeldieu’s use of traditional Scottish folk melodies does add color and atmosphere with its evocation of Scotch reels and jigs but that mostly is heard during the overture or orchestral interludes.  One can see why this opera’s appeal faded over time except for the tenor solos which are original and striking.

As Anna, posing as the “White Lady,” soprano Katy Lindhart revealed a rich, ductile and flexible soprano with bright tonal point and lush timbre.  Lindhart proved equally adept in long spun legato lines and brilliant coloratura.  Lindhart also fell prey, as did too many others in the cast, to mugging and spoofy antics during the dramatic interludes deliberately making fun of the fanciful and contrived story.  This was unnecessary and unsubtle and should have been avoided.  The libretto is old-fashioned but isn’t worthy of mockery or condescension.

The voices of the supporting singers were uniformly fine.  Ghana-born bass Kofi Hayford as the villainous Gaveston has an impressively sonorous instrument and compelling stage presence but sometimes fell below pitch and had the weakest French diction in the cast.

Baritone Joe Lodato in the buffo second tenor role of Dickson displayed a rich rounded tone that easily scaled  the tessitura and was an alert and compelling stage performer.  Soprano Kathleen Norchi as his wife Jenny sang firmly and brightly with a soprano of color and substance.

Laura Zahn has a smooth appealing lyric mezzo that lacked contralto color for the role of the old servant Marguerite—she sounded and acted too young and was also guilty of making faces.  Bass Nate Mattingly, a late addition to the cast during rehearsals, made a good impression as the Justice of the Peace MacIrton.  Steven Herring displayed authority and restrained humor as the Narrator.

Without companies like New Amsterdam Opera, operatic works in neglected genres would go unheard and could only be encountered on old recordings.  This weekend, Teatro Grattacielo [] will perform Zandonai’s very rare Giulietta e Romeo in Battery Park downtown on Saturday and Sunday, offering another chance to bring the forgotten past to life.

Photos by the author